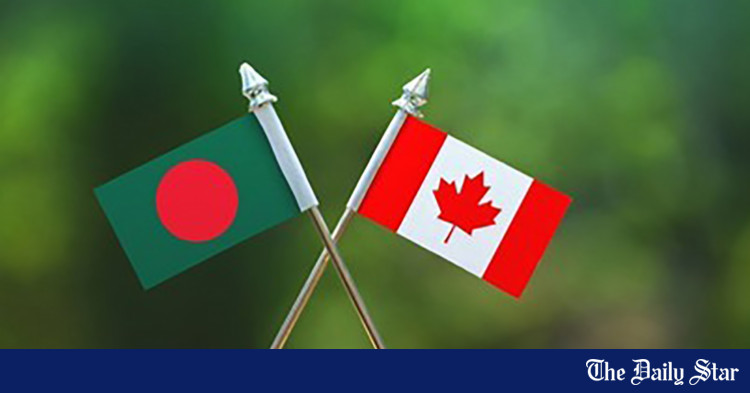 The Canada-Bangladesh joint working group yesterday agreed to work to strengthen bilateral commercial relations and promote trade and investment between the two countries.
Bangladesh is now one of the best investment destinations in the region thanks to its infrastructure facilities, huge domestic market and duty-free facilities in major global markets.
But Canadian investors are not yet aware of this advantage.
Therefore, a joint working committee of the two countries will brand Bangladesh in Canada to strengthen investment and trade, the Federation of Bangladesh Chambers of Commerce and Industry (FBCCI) said in a statement today.
Nominated members of the governments of the two countries discussed the issue at a virtual meeting of the committee held on Tuesday.
FBCCI President Md Jashim Uddin and Co-Founder and Vice Chairman of Consumer Health Nuzhat Tam-Zaman co-chaired the meeting.
The previous meeting of the Canada-Bangladesh Joint Working Group identified tourism, ICT, agriculture, agri-food, education, pharmaceuticals and renewable energy as potential sectors for collaboration.

Jashim Uddin called for giving importance on the blue economy and plastics sector.
The FBCCI Chief said Canada is one of the best countries in the world in ocean economy.
The country has the expertise and knowledge to use its marine resources in a sustainable manner.
On the other hand, Bangladesh has a 710-kilometre-long coastline with an exclusive economic zone of 200 nautical miles inside the Bay of Bengal. But most of the resources are untapped.
With Canadian investment, technical knowledge and assistance, Bangladesh’s economy will move forward by utilising its marine resources.
The FBCCI president also said his association would soon submit a sector-wise report on the blue economy, plastics and tourism to the working committee.
FBCCI Director Syed Almas Kabir will also submit a report on skills development and information technology at the next meeting.
The two sides agreed to strengthen inter-communication between industry associations to remove trade barriers and increase bilateral trade.
At the meeting, the entrepreneurs talked about making Canada’s Rules of Origin easier to increase exports of Bangladeshi products, while Canada has demanded on-arrival visa in Bangladesh to facilitate trade and investment.
During the meeting, a study report on the prospects of Bangladesh’s leather, leather products, and footwear export sector in Canada was presented by Md Saiful Islam, a director of FBCCI and the president of Metropolitan Chamber of Commerce and Industry in Dhaka.
Chris Dekker, president of Saskatchewan Trade and Export Partnership, presented another report on bilateral trade.

The Joy Of Frances Tiafoe & His Chase For The ‘Secret Sauce’ | ATP...

Ruben Randall - December 26, 2022 0
TV/Movies
Paulina Gretzky, the oldest daughter of Wayne Gretzky, was once famous because of her father. But now she has started to make a name...