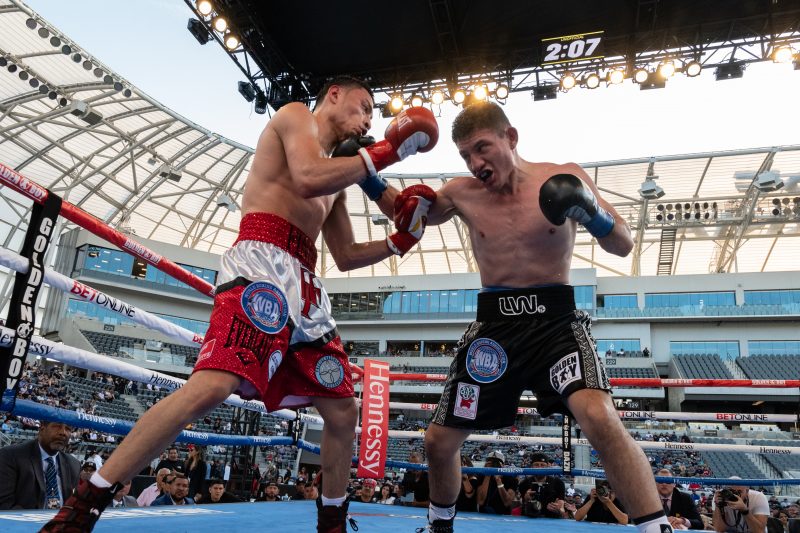 William Zepeda’s (right) relentless attack and seemingly limitless stamina was too much for Hector Tanajara, who was stopped in six rounds in July 2021. (Photo by Sye Williams / Golden Boy Promotions)

William Zepeda is ready to enter the upper echelon of the lightweight division. A convincing win over a former world titleholder would help his cause.

Zepeda will face Joseph “JoJo” Diaz on Saturday night at the Pechanga Arena in San Diego, California. The 12-round bout will headline a four-fight DAZN stream (8 p.m. ET/ 5 p.m. PT).

At Friday’s weigh-in, Zepeda weighed in at a contracted weight of 137 pounds. Diaz weighed 137.6 pounds.

Saturday is an appealing clash between two lightweight contenders ranked in the top 10 by The Ring. Diaz and Zepeda are ranked Nos. 6 and 7, respectively. Both are southpaws whose styles could compliment one another to produce an action fight.

Zepeda (26-0, 23 knockouts), who resides in San Mateo Atenco, Mexico, last fought on May 14, defeating Rene Alvarado by unanimous decision in a hard-fought battle. The win over Alvarado took place less than three months after Zepeda knocked out Luis Viedas in the third round.

Diaz will be a significant step-up in opposition for Zepeda. Diaz (32-2-1, 15 KOs), who was born and raised in the Los Angeles suburb of South El Monte, has not fought since losing to WBC world lightweight titleholder Devin Haney in December 2021. Despite Diaz having only one win in his last three fights, Zepeda is not underestimating him.

“I had a really great training camp,” said Zepeda at Wednesday’s open workout. “I know I have a complicated fight ahead of me, but I am very motivated with excellent preparation, like always.

The hard-hitting Zepeda has told The Ring he is ready to step up to face the likes of Haney, Ryan Garcia and Gervonta “Tank” Davis, among others. Shakur Stevenson has indicated he is moving up in weight to 135 pounds, making the division one of the most competitive in the sport.

Diaz himself is no stranger to facing top opposition. He is a former titleholder at 130 pounds and had a solid outing before the loss to Haney, defeating Javier Fortuna by unanimous decision on July 9 of last year.

Zepeda is convinced that a solid win over Diaz will put him among the best in the division and could set up an appealing fight against Garcia. Both are promoted by Golden Boy Promotions.

“I was very excited when I got the call for this fight,” said Zepeda, who is managed by Jaime Picos. “I’ve always wanted these types of opportunities. I’ve trained really hard for this, and this fight won’t be the exception. We are very concentrated and focused because we know this is a big opportunity.”

With a lot on the line and fighting to his strengths, Zepeda will likely be the aggressor against Diaz. How he deals with adversity against a fighter as polished as Diaz remains to be seen. Zepeda has an improved skill-set and does not only rely on his power.

Still, Zepeda is confident the fans in attendance and tuning into DAZN will be the real winners.

“There is no A-side or B-side. This is a fight for the fans.

“I’m very grateful for my promoter, Golden Boy, and to my team for bringing out that talent and for teaching me new things. These are the types of opponents that bring out the best fights and show that we belong.”

In the co-feature, fringe welterweight contender Alexis Rocha (20-1, 13 KOs) of nearby Santa Ana will square off against Tijuana’s Jesus Perez (24-3, 18 KOs) in a 10-round bout.

Francisco A. Salazar has written for The Ring since October 2013 and has covered boxing in Southern California and abroad since 2000. Francisco also covers boxing for the Ventura County (California) Star newspaper. He can be reached at [email protected]

Teen Mom Kailyn Lowry shows off her stomach in a rare video amid rumors...

Bruce Willis’ Net Worth Shows His Sixth Sense for Finances! What He Made for...