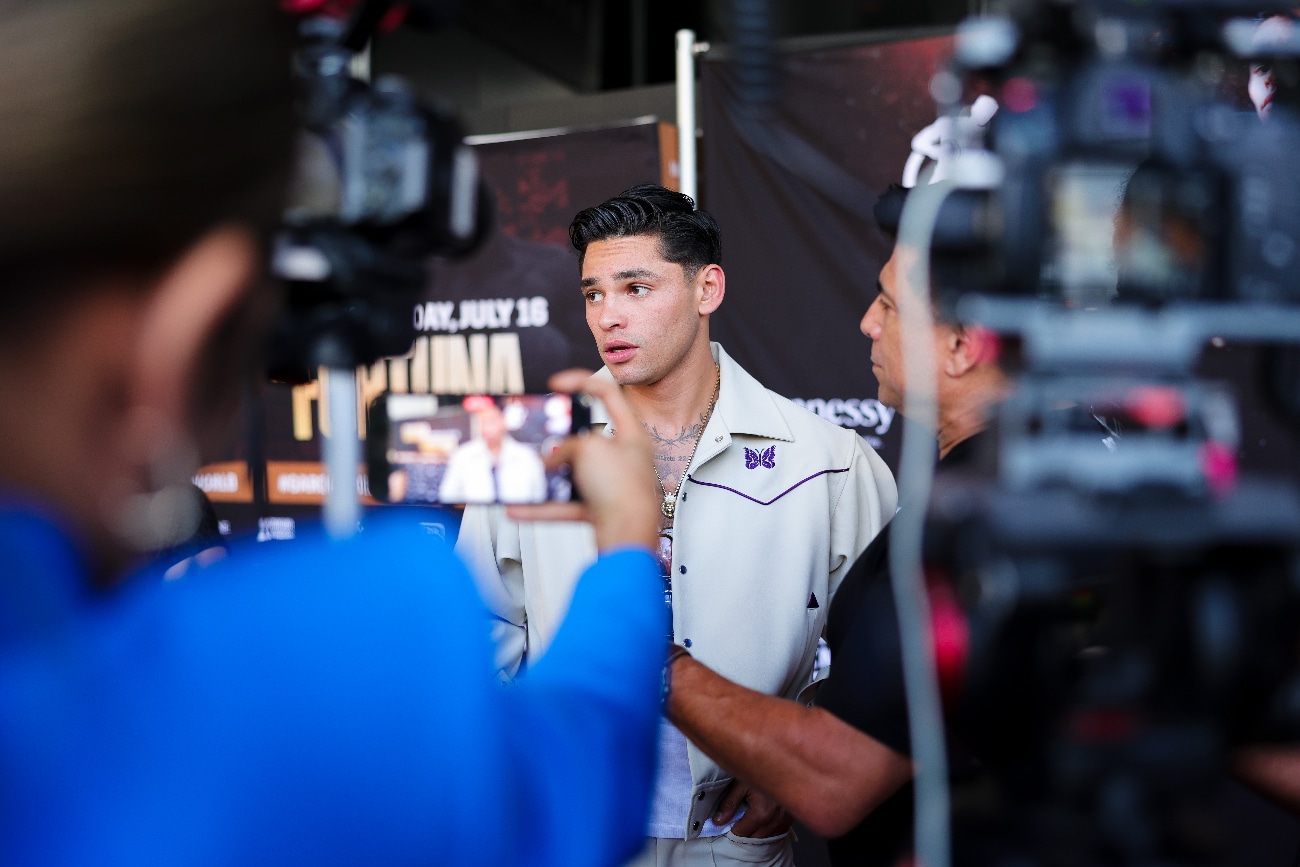 Approximately six weeks ago, Ryan Garcia agreed to participate in a 135-pound fight scheduled for July 16 at Crypto.com Arena in Los Angeles, California. Since the fight was announced, Garcia has maintained a strict tunnel vision, as his eyes are focused on one man.

Dressed in a black tuxedo, Garcia had a ringside seat for the May 28 grudge match between Gervonta “Tank” Davis and Rolando “Rolly” Romero. Prior to the start of the fight, Garcia decided to make a bet with WBA/WBC/IBF welterweight champion Errol Spence, as he proceeded to wager $20,000 on Rolly Romero to upset Tank Davis. Six rounds into the fight, Romero walked into a counter left hand that ended his night, and that same left hand made Garcia’s bank account $20k lighter. Immediately after the fight, Garcia logged on to Twitter to state how he was going to get Tank.

A week later, Garcia was multitasking by watching the Haney-Kambosos fight, and tweeting his disapproval of the bout all at the same time. Garcia labeled the undisputed lightweight championship clash as a boring and underwhelming matchup. Garcia wanted to share his opinion of the fight with Tank Davis, and he did so by tagging Davis in a tweet in which he asked Davis, “You Watching this stuff?? When we fight don’t let it be like this!!!” Davis noticed the tweet and posted the response, “Shut the f— up!”

In the course of the press conference held for his upcoming fight, Garcia addressed his desire to battle Davis in the ring. “That’s all I want, that’s all I see. I don’t care about nobody else right now. The fans want it, I’m sure of that, and I want it.” Garcia had more words for Davis during a recent interview with TMZ Sports when he promised to put Davis to sleep. The 23-year-old has used the past several weeks to do interviews and post on social media to show passion, desire, and to really drive home the point that he wants to defeat Gervonta Davis. The problem the general public have with what Garcia is doing is based on the fact that Gervonta Davis isn’t Ryan Garcia’s next opponent.

See also  'I can't see' - Gervonta Davis hit Hector Luis Garcia so hard he lost his vision, said 'I didn't know where I was,' and had to quit on his stool

On July 16 Javier Fortuna (37-3-1, 26 KOs) will step into the ring with the intent of scoring an upset victory over Ryan Garcia (22-0, 18 KOs). Fortuna is a former world champion who has an extensive amateur background. The 32-year-old is an experienced boxer who has a slightly awkward style, he possesses good power, he’s aggressive, and he understands distance. Garcia has all the physical advantages such as height and reach, but Fortuna may have the mental advantage due to the fact Garcia has supplied him with a significant amount of bulletin board material.

Boxing in general is a field powered by competition and the desire to be the best. Every pro boxer trains with the purpose of being elite. The one thing you don’t want to give an opponent is motivation or added fuel, but Ryan Garcia may have done that by giving Fortuna bulletin board material. In the world of sports, bulletin board material is quotes or actions directed at the opposition in which the opposition views it as being disrespectful.

Bulletin board material can add more fuel to your opponent’s fire, and it gives them that extra incentive to perform well.

Javier Fortuna should be extremely motivated based on the fact that Ryan Garcia has been treating Fortuna like a side note. Every time Garcia does an interview in regards to his upcoming bout, it seems as though he’s not giving his opponent the proper attention, as it relates to Garcia constantly stating after he beats Fortuna he wants Davis. Garcia hasn’t made an attempt to give Fortuna the type of respect where he acknowledges he wants to focus on the July 16 bout first, and talk about the future matchups later. Even when he doesn’t initiate the Davis talk, Garcia takes the bait from the media and verbalizes his obsession of a boxing match with Tank Davis. What Garcia is doing is a form of providing bulletin board material, and it is something that should definitely galvanize Fortuna.

On paper when you analyze the logistics of the Garcia-Fortuna match, you almost have to select Ryan Garcia as the boxer to come out of this bout with a victory. Fortuna is experienced and he could capitalize on Garcia’s flaws in regards to Garcia at times keeping his chin up and throwing wide punches, but at the end of the day, Garcia is favored to win. With that being said when you analyze sports, you also have to look at the intangibles. The bulletin board material Garcia provided is an intangible because it could make Fortuna more focused and more determined to win the fight.

Hopefully for Garcia, on fight night he is more focused on his current opponent instead of his possible future opponent. Looking ahead is a dangerous thing, and judging by Garcia’s actions it seems like that’s exactly what he’s doing. For several weeks he’s treated Fortuna like a warmup type of opponent. Overlooking a competitor and treating them like a warmup is a very dangerous thing. The viewpoint of Fortuna being treated like a practice opponent may sound a bit harsh, but he is a 5 foot 6 southpaw who has a powerful left hand, and he’s a good counter puncher. To illustrate the possibility of him being looked at as a warmup if you judge by that description, does Fortuna remind you of someone at 135 who is on a higher level, and currently resides at the top of the food chain?

Exclusive: Devin Haney can be one of the best ‘in the...