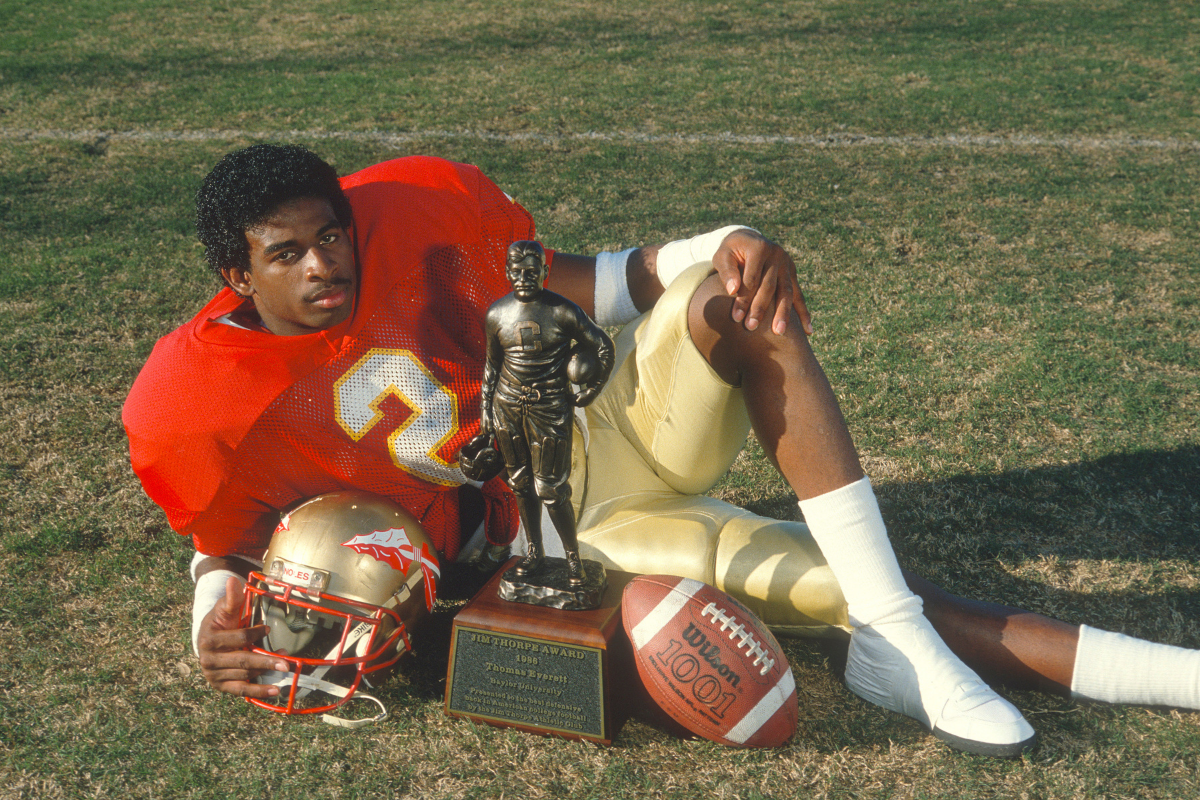 It’s not exaggeration to say that Deion Sanders was one of the greatest athletes of all time. What he did in college football, the NFL and in Major League Baseball can only maybe be matched by Auburn’s Bo Jackson. It were those incredible gifts that made Prime Time a highly sought after recruit back in the 1980s.

Sanders, now considered by many to be one of the greatest cornerbacks and return specialists of all time, had to make a pretty big decision while still attending North Fort Meyers High School. It was a decision that would ultimately change the course of many college football programs, some for better and some for worse.

Luckily for him, choosing to play college football at Florida State University was easy. Per David Dorsey of News-Press.com, Sanders had a pretty simple criteria for choosing the school. He wanted to stay close to his mother, which he could do playing in Tallahassee. He wanted to play as a true freshman, which the FSU coaching staff would allow him to do, and perhaps most importantly, he liked the food in the school’s cafeteria.

Florida State Made an Exception For Prime Time

Photo by Focus on Sport/Getty Images

“It was a good feeling, but I knew I was going to miss him,” Sanders’ mother, Connie Knight, said of sending her only son off to school. “But I felt good for him, because I knew he was going to do what he always wanted to do. I had input, because I didn’t want to go out of the state to see him play. I just couldn’t afford it. By going to Tallahassee, I knew I could be there, and I was there. I went to every home game.”

See also  Despite His Outright Fame and $300M Net Worth, Phil Mickelson Once Failed to Succeed in a $20.2 Million Investment

Long before Internet message boards and social media had overtaken recruiting, coaching staffs had to rely on word-of-mouth means throughout the process. Florida State’s staff first heard about Sanders through an FSU booster, Walter Grace, who first saw Sanders play during a Pop Warner game when Sanders was 9 years old.

Back then, alumni were able to recruit for schools. That rule ended in 1986. That gave Grace the opportunity to tell the coaching staff about Sanders.

“I knew all the coaches at North Fort Myers, and they were all good friends of mine,” said Grace, who is still living in Fort Myers. “It was the easiest recruiting job I ever had, because there really wasn’t much competition. After Deion took off, that turned things around for Southwest Florida and recruiting.”

Bobby Bowden, who was Florida State’s head coach at the time of Sanders’ recruitment, wasn’t too fond of playing true freshmen. Grace says he made a special exception for the talented Seminoles defensive back.

“He didn’t like starting freshmen,” Grace said of Bowden. “But he was going to have to figure out a way to start Deion.”

RELATED: Deion Sanders Picked Off Brett Favre & Showed Him Who “Prime Time” Is

See also  Which Famous Celebrity Would Montanans Choose As A Neighbor?

After watching Sanders cut his eyebrow on the 10-foot-high rim, Harbison canceled all his other trips to North Fort Myers High.

“I don’t want to draw attention to the situation down here,” Harbison told Grace. “So I’m going to stop coming down here. You keep your hand on the situation. Maybe we’ll rob Fort Knox.”

Former North Fort Myers coach Ron Hoover said he had trouble believing that it had been 30 years since Sanders’ recruiting process.

“He was recruited strong by Georgia and Miami and Florida,” Hoover said of Sanders. “But I think the turning point was that Georgia and Florida, they mentioned, ‘Well, you’re going to have to come up and get used to things.’ But Florida State, they committed to him playing right away. And then by the third ballgame, he was their starting defensive back. And we all know what happened after that.”

Yeah, I think it’s safe to say things worked out for Deion Sanders at Florida State and in the NFL. Now that he’s coaching at Jackson State, it’s only a matter of time before he’s roaming the sidelines in Doak Campbell Stadium back at his alma mater.

This article was originally published August 3, 2015.