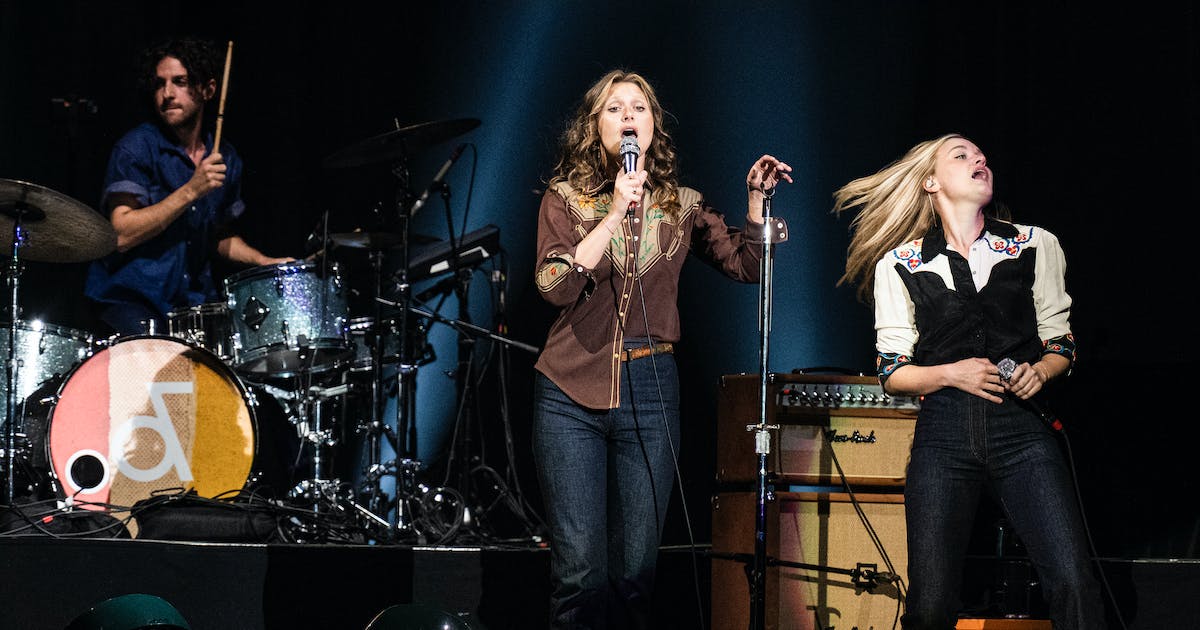 Why did Brandi Carlile have two support acts this year? Why was Nile Rodgers setting the table for Duran Duran? Why did Broadway star Ben Platt reach out to Aly & AJ to warm up his audiences?

Platt’s relationship with Aly & AJ goes back to when he was 9 or 10 and to a children’s theater production in Los Angeles in which Aly Michalka played his older sister.

“We lost touch,” said Platt, who tapped the Disney-launched sister act to open for him two weeks ago at Target Center. “They were sort of an iconic presence in my upbringing. When this opportunity came back around, I assumed they’d be too cool for me, but they were so into it.”

Guitarist/producer Rodgers worked on several Duran Duran recordings, dating back to 1984. He’s considered the unofficial fifth member of the veteran British band, but he has his own longtime U.S. group, Chic, so they were a natural opener, as Duran Duran frontman Simon Le Bon explained.

“The overall feeling we’re trying to create is the best party you’ve ever been to in your life with music, lights and cool people. Chic and Nile Rodgers have got a wonderful party vibe about them. It’s an evening of quality entertainment.”

That’s the goal of Carlile, who hand-picks her openers.

“I like to think about the whole arc of the evening for the audience,” said Carlile, who had the cult-loved Lake Street Dive and little-known Celisse (who had collaborated with Carlile’s supergroup the Highwomen) with her this summer. “At the end of the day, I’m an entertainer more than a songwriter and more than a singer. So I like to choose my opening acts on what will be the most entertaining and enjoyable experience for everyone in the venue.”

However, some artists think of themselves more so than their audience. Taylor Swift told the Star Tribune that she likes to tap artists she likes to hang out with because they’re on tour for weeks. Ditto for Maren Morris. But for the country-pop star, it’s more than hanging out.

“I just pick artists I’m a fan of,” said Morris, who has snagged the Lone Bellow to open for her Armory concert on Oct. 21. “I bring out people I love that I think my audience will love.”

Not that it’s always a good deal to be an opening act. The pay is usually modest, the sound system not always kind, and the crowd not necessarily attentive. It’s a gig celebrated sarcastically by Mary Chapin Carpenter in a 1990 song with the obvious title, “Opening Act.”

“You don’t have a backstage room of your own
You just have feedback in your microphone
‘Cause you don’t get a soundcheck
‘Cause you’re not worth the time
You’re gonna have to face it
You’re no better than slime
You don’t know me; I’m the opening act”

There is a long history of opening acts in show business, reportedly dating back to the late 1800s. The opener is there “to warm up” the audience. And to lengthen the show, which means two things — giving the fans their money’s worth and giving the venues more time to sell alcohol and other concessions.

Back in 1950s and ’60s, comedians often opened for musicians and vice versa, especially in Las Vegas. When rock concerts started to take off in the late ’60s and early ’70s, some stars invited their older heroes such as Muddy Waters and Jerry Lee Lewis to open.

Nowadays, certain established stars want to give newcomers a break.

When country favorite Darius Rucker played a sold-out theater tour this year, he plucked rising Nashville talent Caylee Hammack “who needed to play in front of people.” They even sang a number together.

Morris found herself as that newbie several years ago with her self-released song “My Church” catching the ear of country superstar Keith Urban.

“He heard a couple of my songs from Spotify and offered me an entire tour [as opener],” Morris said. “We hadn’t even met.”

Some fans like to discover new talent. Gina Smith of Montrose, Minn., who usually arrives early enough to stand close to the stage and take a chance on opening acts, remembers seeing the Lowest Pair open for Trampled by Turtles in Mankato in 2014. Now she’s going to see the Lowest Pair as headliners Oct. 15 at Cedar Cultural Center.

Inveterate Minneapolis concertgoer Don Buckley, who attends six or seven concerts a week, typically shows up before showtime to check out new bands, which he researches in advance on YouTube and other sites.

“One of my favorite bands, Imagine Dragons, I discovered when they were the middle of three bands at the Triple Rock,” he said of a 2012 gig at the now-defunct Minneapolis club. Now, of course, Imagine Dragons is one of America’s biggest rock bands.

Some stars are very strategic in their thinking, concerned about aesthetics as well as business.

With Bonnie Raitt playing U.S. amphitheaters this summer, she was cognizant of having an established opening act that could attract fans.

“I can’t draw the same number of people without having a significant co-bill,” said Raitt, who featured either Lucinda Williams or Mavis Staples on tour this year. “It’s a great complementary situation — not too similar, not too different.”

Being complementary is crucial, especially if it’s a co-headline concert or a multi-act package. Take Def Leppard, which toured this year with the ’80s rock extravaganza featuring Mötley Crüe, Poison and Joan Jett. A few years ago, Def Leppard shared a tour with Journey. The idea is that the sum is greater than the individual parts or 1+1=3.

That’s easier said than done because, well, musicians have egos. Sometimes big egos. So who headlines on a co-bill of two big names?

The bands’ respective managers hatched the tour three years in advance but “we kind of have the last say,” Schon said. “We’ve never been out with anyone we couldn’t stand.”

Sometimes stars are prescient in picking a promising up-and-coming act. It was just in 2016 that Justin Bieber trotted out Post Malone to sing his first single “White Iverson.” And now Malone is hotter than the Biebs.

Whether it’s arena, state fair or club concerts, most nationally known performers tour with their own opening acts. Sometimes promoters get asked to find an emergency fill-in.

“The agents will let us know the criteria and we’ll submit a list of names with links [to music],” said Nate Kranz, general manager of First Avenue, whose venues stage 1,100 shows annually. But the agents — or their acts — have the final decision.

Kranz cited two recent examples. Last year, when Jenny Lewis pulled out of a Trampled by Turtles show in Duluth, the Jayhawks, the Twin Cities stalwarts, were drafted as an opener. And for next Saturday’s Broken Social Scene gig in St. Paul, Kranz enlisted Poliça, a local band with a national reputation, after the scheduled opener backed out.

Sometimes performers speak up for themselves. That’s what Lizzo did in 2015, reaching out to First Avenue to see if she could open for Sleater-Kinney there. She ended up on the rockers’ entire tour and now, Lizzo is a household name.

Pairing acts is an art, not a science, and some artists just don’t want to have opening acts.

“I don’t use them,” said David Crosby, often a contrarian. “I like a fresh audience.”

The big gigs: 10 concerts to see in the Twin Cities this week

Arnold Schwarzenegger’s Son-in-Law Chris Pratt Has a ‘Promise’ After Being ‘Blown...

Ruben Randall - September 23, 2022 0
Actor
Worldwide fans awaiting the release of the highly anticipated Mario movie can finally release a sigh of relief. As a confidant of the...