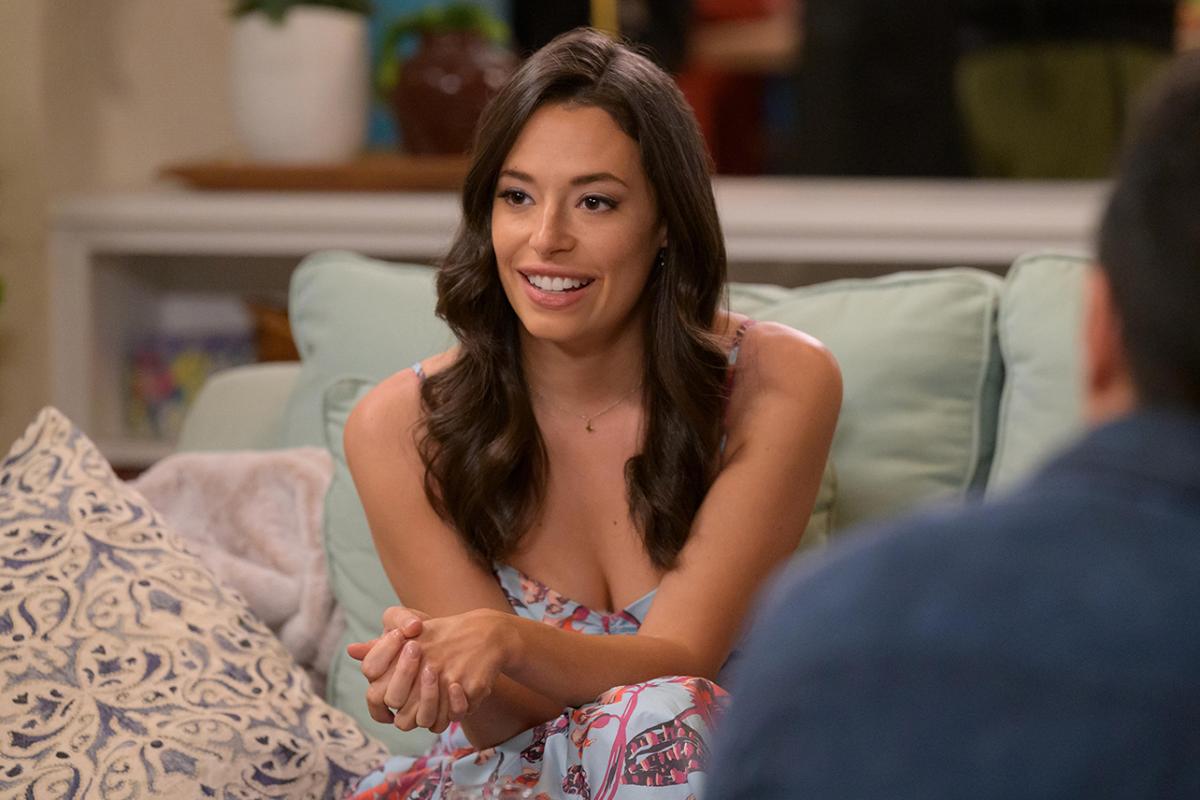 Written and executive produced by Justin Adler and Maggie Mull, Maggie has a charming cast led by Rittenhouse, who plays a psychic struggling to find love and live a relatively normal life while seeing the future of everyone around her. No big deal! After meeting a charming man named Ben (David Del Rio) and catching a glimpse of herself in his future, Maggie falls for him, but later calls it off after she has a vision of him marrying another girl.

That other girl turns out to be Jessie, Ben’s on-again-off-again girlfriend who he moves in with in the apartment directly under Maggie’s. Yikes. So what’s Jessie’s deal? And what do we know about Chloe Bridges, the actor who brings the character to life?

We’ll break it down for you, but be warned some Maggie spoilers lie ahead.

Who is Jessie in Maggie on Hulu?

Though we don’t know who Jessie is at first, we initially see her about three quarters of the way through the pilot in one of Maggie’s visions. After Maggie and Ben hook up, Maggie touches Ben’s hands and see a vision of a woman with brown hair (it’s Jessie!) in a wedding dress and veil about to marry him. This vision causes Maggie to lose hope in her relationship with Ben, so she breaks things off.

After a short time jump, we see Maggie meeting Jessie IRL. She’s the new tenant in Maggie’s downstairs apartment, a hairstylist, and also the on-again-off-again girlfriend of Ben, who she’s moving in with. Unaware that Ben and Maggie have hooked up, Jessie explains that she and Ben have known each other for 14 years. We learn they recently broke up twice (which is how Ben met Maggie) and they got back together two weeks after he and Maggie called it quits.

As the series progresses, Maggie, Ben, and Jessie form a friend group with Maggie’s bestie Louise (Nichole Sakura), Ben’s sister Amy (Angelique Cabral), and her fiancé Dave (Leonardo Nam). Maggie and Ben decide it’s best not to tell Jessie about their past, so as not to hurt her — a decision that predictably backfires.

In the words of Dave, “Everybody loves Jessie. She’s like ketchup.” But it’s hard for Maggie to love her, because she clearly still has feelings for Ben.

Over the course of Season 1, Jessie starts doubting her relationship with Ben. She gets upset after learning he was on a dating app when they broke up, and once she finds out Maggie and Ben’s secret she heads to her cousin’s house to get some space. The season ends with Maggie telling Ben she knows he’s meant to be with Jessie, but then she sees a conflicting vision where she’s the one who marries Ben. Drama!

Who is Chloe Bridges, Who Plays Jessie in Maggie on Hulu?

Chloe Bridges is a 30 year old actress from New Orleans, born Chloe Suazo, who’s married to actor Adam Devine. She kickstarted her career in 2005 as Zoey Moreno in the ABC series Freddie, which starred Freddie Prinze Jr., and went on to appear in projects including Camp Rock 2: The Final Jam, 90210, New Girl, The Carrie Diaries, and Pretty Little Liars.

Bridges has more than 194,000 Twitter followers and 698,000 followers on Instagram, but those numbers are sure to grow as more people discover her on the Hulu series, which has all 13 episodes in Season 1 available to stream now.

Before Maggie, Bridges most recently appeared in The Righteous Gemstones as Meagan. And her IMDb page notes that she’s playing a character named Azura in Alexander Garcia’s upcoming film Skate God, alongside Nathan Gamble and Evan Ross. Hopefully we’ll see more of Bridges on screens in the future, especially since we need to know what happens with Jessie and Ben after Maggie‘s Season 1 finale cliffhanger.

Ruben Randall - December 1, 2022 0
Actress
It's always the quiet ones you have to look out for in the world of Game of Thrones, and in House of the Dragon,...