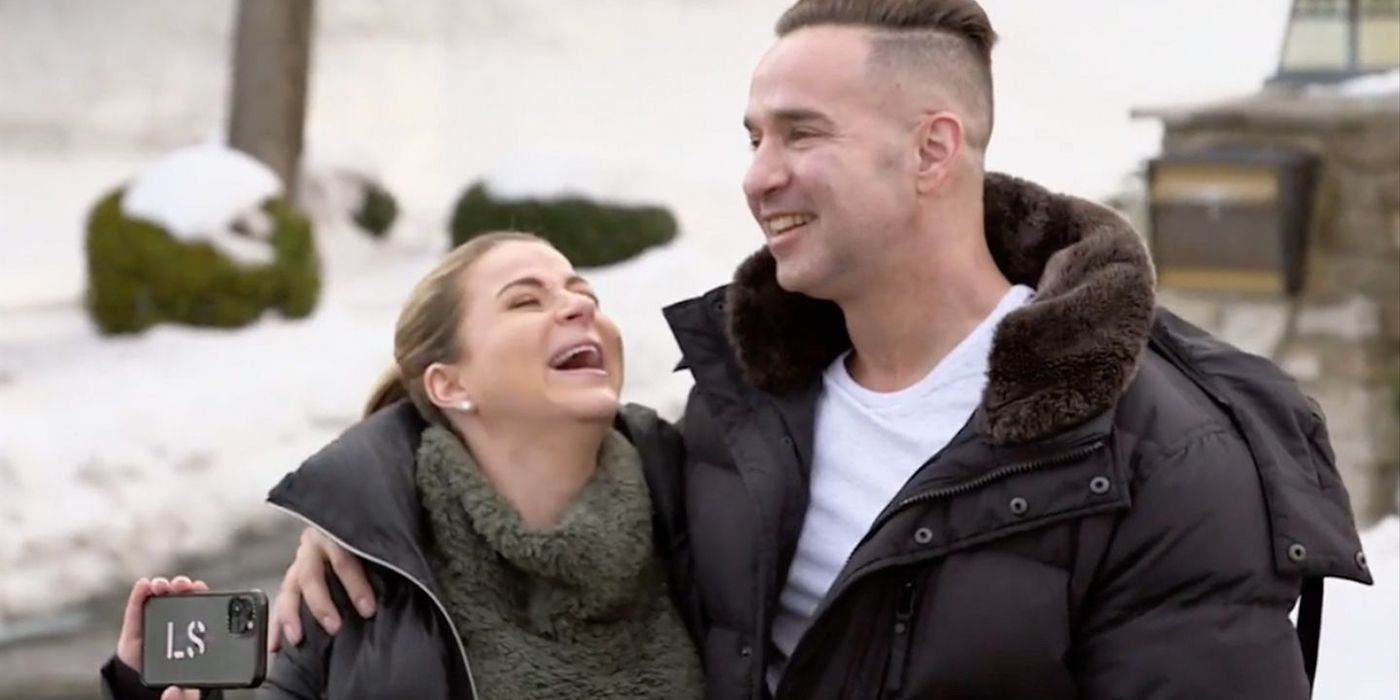 The Jersey Shore cast has come a long way since the MTV show first aired in 2oo9, and it’s time to talk about couples from the series who are still together as of late this year. When the show launched, it shook things up, as it featured a number of East Coast “guidos” and “guidettes” who were eager to live the good life at the Jersey Shore. However, the franchise evolved to focus on the early-20s cast members as they grew up and faced everything, from heartbreak to marriage to incarceration. As 2021 comes to a close, many cast members are in stable and healthy relationships, some of which have led to weddings and/or children. Discover which Jersey Shore relationships have survived and which cast members have new romances.

When it first debuted on MTV, few could have predicted the cultural impact that Jersey Shore would have. Since then, countless spin-off shows have chronicled the cast as they fight, reconcile, and party around the world. While the original Jersey Shore concluded in 2012, it has since led to multiple spin-off shows. Its successor, Jersey Shore: Family Vacation, continues to highlight cast member relationships, with a fifth season renewed in September for next year. Meanwhile, fans have kept up with many of the high-profile cast members on social media.

Though many cast members have moved onto serious relationships or engagements, it appears that Vinny Guadagnino is still very much single, even though many fans supported his romance with Maria Elizondo. Meanwhile, Sammi “Sweetheart” Giancola called off her engagement to Christian Biscardi and is now rumored to be seeing a mystery man. However, details of her budding relationship have yet to be confirmed, although photos suggest she has found someone new. The other Jersey Shore cast members have their current relationship statuses confirmed- for now.

Nicole “Snooki” Polizzi and Jionni LaValle are one Jersey Shore couple who have weathered many storms together. Despite rumors of the married couple splitting, it appears that Snooki and Jionni are closing out another year together. The couple first met at the club Karma over a decade ago, back in 2010, when Jersey Shore was filming. Despite breakups, big fights, and cheating allegations, Snooki and Jionni married and remained committed to their relationship. Jionni and Snooki are the proud parents of three children, with Snooki giving birth to their second son in May 2019. Though it isn’t always easy, Snooki and Jionni appear to have a happy home life with each other and their kids. They even celebrated their seventh wedding anniversary last month.

Out of all of the Jersey Shore cast members, Mike “The Situation” Sorrentino has changed the most. Mike’s partner Lauren has remained by his side through all kinds of difficulties, from his prison stint for tax evasion to his sobriety journey. Mike and Lauren are college sweethearts who rekindled their love after he skyrocketed to fame on Jersey Shore. The duo married in November 2018 and they have formed one of the healthiest and most stable franchise relationships. Mike and Lauren recently had their baby boy Romeo baptized, and Mike celebrated five years of sobriety this year. Mike and Lauren are the ultimate Jersey Shore success story duo.

Jenni “Jwoww” Farley has seen many relationship ups and downs, but she is closing out the year with her partner Zack Clayton “24” Carpinello. Jenni experienced a very public divorce with the father of her daughter and her ex-husband, Roger Matthews, back in 2019. She then shocked audiences by getting engaged to Zack, who was younger than her. Though not many viewers expected to see their relationship work out, Jenni and Zack are still together and engaged. Zack posted a date night photo of Jenni from this month to confirm that their relationship is still intact, despite their age difference. However, not all fans are enthusiastic about their romance.

See also  Arnold Schwarzenegger's Debut Films Rights Were Sold on eBay for a Starting Price of $550,000- Here’s Everything You Need to Know

Paul “DJ Pauly D” DelVecchio shocked audiences by actually finding love with Nikki Hall on Double Shot At Love, which he appeared in alongside his Jersey Shore cast member and best friend, Vinny. Nikki and Pauly have been dating on and off since they met on the spin-off show in 2019, which led to Nikki joining the cast of Jersey Shore: Family Vacation. Pauly and Nikki are now in a committed relationship, which means that the notoriously single Pauly is off the market, although Vinny is still available. One thing that Nikki doesn’t want to address is marriage rumors. The partner of Pauly is simply enjoying her relationship and doesn’t appreciate fans constantly asking if he is going to pop the question. However, many Jersey Shore fans think that Nikki and Pauly are a great match.

Deena Cortese and Christopher Buckner are one Jersey Shore couple that viewers adore. Deena and Chris got engaged in 2016 and have been enjoying a happy marriage since 2017. Deena and Chris, who are parents to sons CJ and Cameron, form one of the most normal and least problematic Jersey Shore relationships, which makes their marriage very easy for viewers to root for. Deena and Chris are still together and have an adorable family of four that they enjoy posting online. Cameron recently celebrated his first Thanksgiving to the delight of his parents.

Angelina Pivarnick has made amends with the Jersey Shore cast since her fiery exit from the show over a decade ago. She is now married to Chris Larangeira. Angelina and Chris have been on-again-off-again throughout their relationship, and they were believed to have broken up last month after Angelina seemingly purchased a large New Jersey house alone. However, it appears that the couple is living in the property together, and the breakup rumors were entirely false.

Ronnie Ortiz Magro has a very complicated and messy relationship history. However, he is ending the year with his fiancé Saffire Matos at his side. The couple is rumored to be going through a rough patch, although they appear to still be together. Ronnie and Saffire are known to play it hot and cold, although they appear to be one Jersey Shore couple who is still in each other’s lives.

Next: Jersey Shore: The 10 Best Side Cast Members


Emma Fischer is a dog-enthusiast who holds a BA in English Creative Writing. You can visit her website at www.emmapolini.com.

Across The Spider-Verse Reveals A New Look At Spider-Gwen

Stuff it, get out there and travel

Is Siem Offshore (OB:SIOFF) Using Too Much Debt?

Helpline for music industry launched after stars including Rebecca Ferguson and...