Ah, young love! Actress Millie Bobby Brown and Jake Bongiovi are red carpet official, and they have the sweetest romance. Learn more about her boyfriend, including his age, his famous family and more.

Who Is Jake Bongiovi?

The 19-year-old is a student at Syracuse University in New York and is the son of rockstar Jon Bon Jovi and wife Dorothea Hurley. The A-list couple shares four kids — Jake, Romeo, Stephanie and Jesse.

The famous family is incredibly close and even quarantined together for a good chunk of 2020 amid the coronavirus pandemic.

“For about a month, our whole family was intact. Then the big kids finally said, ‘We’re out,’ and made a run for it,” the “It’s My Life” artist told People in October 2020. Dorothea noted, “Our focus has always been family first and making sure that people are doing well. We like each other. We spent a lot of time together, and it was more than we have spent in many years, but it was nice.”

How Long Have Jake Bongiovi and Millie Bobby Brown Been Dating?

It’s unclear when their rumored relationship started, but Jake first shared a photo with the Stranger Things actress, 18, via Instagram in June 2021.

Jake also revealed they had an early holiday celebration in New York City together.

“Happy holidays!” he captioned a photo of himself and Millie looking into each other’s eyes while wearing masks in front of the Rockefeller Center tree. On Christmas Day, the Enola Holmes actress shared a loved-up selfie of the pair in front of another beautifully decorated tree.

Prior to that, the Florence by Mills creator teased their romance in November 2021 when she shared an Instagram photo of a blurry man, who seemed to be Jake, kissing her on what appeared to be the London Eye.

How Did Jake Bongiovi and Millie Bobby Brown Meet?

Jake attended Pennington High School in New Jersey from 2016 to 2020, according to Us Weekly. He and Millie were first photographed together galavanting around New York City. Neither has confirmed how they first crossed paths, but it’s safe to say they both run in famous social circles. 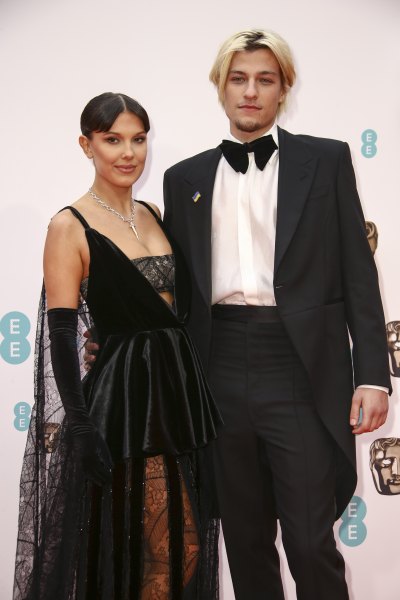 Millie confirmed that she had a boyfriend during a January 2022 interview with Seventeen. At the time, the Netflix star revealed her favorite Olivia Rodrigo song and said, “I love ‘1 Step Forward 3 Steps Back.’ It makes me wanna cry every time. I think my boyfriend’s gonna kill me if I listen to it around him anymore.”

Later that year, they made their first public appearance together during the March 2022 BAFTA Awards in London. They’ve since continued to share sweet photos of each other on Instagram, including one of Millie kissing Jake on the cheek in April 2022.