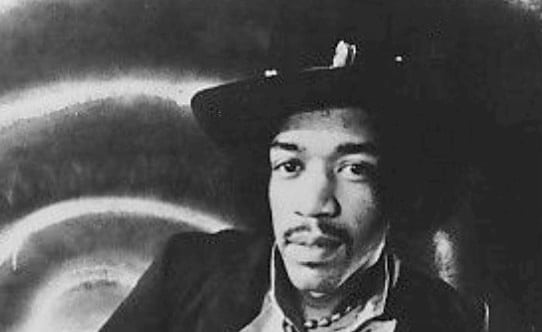 Jimi Hendrix is one of the biggest rock icons of all-time. His guitar playing is legendary and he has influenced generations of musicians.

Even today, Jimi Hendrix songs are covered by a variety of artists, including Gary Clark Jr. and Fiona Apple. Jimi Hendrix albums like Are You Experienced? and Electric Ladyland are considered classics.

It’s not hard, then, to understand why Rolling Stone magazine listed Jimi Hendrix as the greatest guitarist and sixth greatest artist of all-time.

But what’s his story? What are Jimi Hendrix’s best songs and albums? Let’s find out.

Where was Jimi Hendrix born?

This is an interesting question, as he called many places home throughout his life. So where is Jimi Hendrix from? He was born in Seattle, Washington, though he lived in many other places, including Nashville, Tennessee and London, England.

How tall was Jimi Hendrix?

Interestingly, Hendrix’s roots are both African American and Irish. He was born to James Allen Hendrix, called Al, and Lucille Jeter.

Like many entertainers, the “Purple Haze” songwriter wasn’t born with his stage name. Jimi Hendrix was born Johnny Allen Hendrix. In 1946, his parents changed his name to James Marshall Hendrix as a tribute to his father Al’s late brother Leon Marshall.

Famously, although Jimi Hendrix was born left-handed, his father was not happy about that, so he forced his son to play guitar right-handed. Because of this, he played a right-handed guitar and re-strung it so he could play it left-handed.

Before becoming a sensation on his own, Hendrix played with some pretty famous musicians. In the early 1960s, while in Clarksville and Nashville, he played with legends The Isley Brothers, Little Richard, and Curtis Knight.

In mid-1966 Linda Keith, girlfriend of Rolling Stones guitarist Keith Richards, saw Hendrix in New York and was “mesmerized.” She told her famous boyfriend about him, and he suggest Hendrix to both his producer and his manager, but they incredibly didn’t see his talent and passed on him. Big mistake.

Richards then referred him to Chas Chandler, former bassist for popular rock band the Animals, and he understood his talent and signed him.

Chandler quickly found a band to back him, recruiting bassist Noel Redding and drummer Mitch Mitchell to form the Jimi Hendrix Experience.

Hendrix, like The Who and Janis Joplin, got his big break in the United States at the Monterey Pop Festival in 1967. The not-as-famous precursor to Woodstock, Hendrix made his mark with a scorching set and, yes, by scorching his guitar. It’s at Monterey that the whole “Jimi Hendrix burning guitar” phenomenon began.

Iconic Jimi Hendrix songs like “Purple Haze,” “Hey Joe,” “Foxy Lady” (used famously in Wayne’s World), and his cover of Bob Dylan’s “All Along the Watchtower” are iconic and have stood the test of time.

Many deeper cuts from all three Jimi Hendrix albums are just as good, though, like “Highway Chile,” “Stone Free,” and “Voodoo Chile (Slight Return),” which Hulk Hogan used as entrance music when he was part of the NWO.

Though his legend looms large, there were only three Jimi Hendrix albums released during his lifetime, Are You Experienced? (1967), Axis: Bold As Love (1967), and Electric Ladyland (1968).

Jimi Hendrix’s debut album Are You Experienced? is basically like a greatest hits, as it includes his most famous songs, including “Purple Haze,” “Hey Joe,” “Foxey Lady,” “Fire,” and “The Wind Cries Mary.”

Axis: Bold As Love isn’t as packed with popular Jimi Hendrix songs, but it does include classics “Castles Made of Sand” and “Little Wing,” the latter of which was famously covered by Hendrix acolyte Stevie Ray Vaughan.

The final Jimi Hendrix studio album released in his lifetime, Electric Ladyland, is widely considered to be one of the best double albums ever. “Crosstown Traffic,” “Gypsy Eyes,” “Burning of the Midnight Lamp,” and “Voodoo Chile (Slight Return)” are just a handful of its classic songs.

Jimi Hendrix records released in the immediate aftermath of his death, Rainbow Bridge (1971) and Cry of Love (1971), were controversial, as they contained overdubs by Hendrix drummer Mitch Mitchell and others that were made after his death.

1997’s First Rays of the New Rising Sun successfully simulates the innovative double album Hendrix was working on before his death, being based on his actual notes.

Other collections of unreleased Hendrix material include South Saturn Delta (1997), Valleys of Neptune (2010), and, most recently, Both Sides of the Sky (2018).

The most iconic Jimi Hendrix concert is easily his set at Woodstock, although it certainly isn’t among his best shows. It was at Woodstock that the famous Jimi Hendrix national anthem performance took place, in which he gave something of a middle finger to the establishment by disfiguring it with passionate, distorted guitars.

While Woodstock was not Hendrix’s best show, some of his best live material can be found on Band of Gypsys, which was the last album officially released in his lifetime.

The material was recorded live at the Fillmore East with an all-black band consisting of Billy Cox and legendary drummer Buddy Miles.

I hate to break the fourth wall, but I’m kinda surprised at how popular “Machine Gun” is. In fact, one of the most searched Hendrix-related search terms is “Jimi Hendrix Machine Gun.”

Here are some of the most famous Jimi Hendrix quotes:

When the power of love overcomes the love of power, the world will know peace.

Music is a safe kind of high.

Perhaps surprisingly, Jimi Hendrix didn’t have any tattoos. However, many people have tattoos of him, including Red Hot Chili Peppers’ bassist Flea. 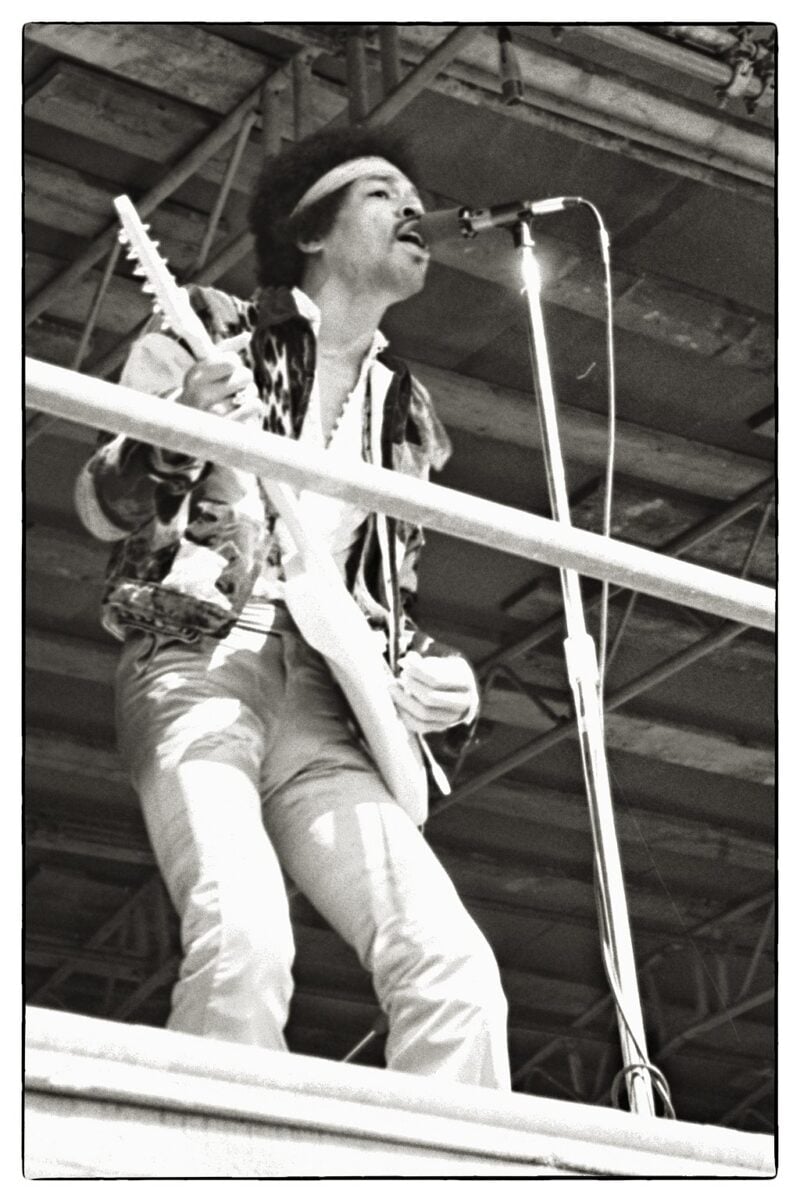 When he died, Jimi Hendrix’s net worth was $800,000 dollars, which translates today to $5 million. As of 2019, the net worth of the estate of Jimi Hendrix was approximately $175 million.

Did Jimi Hendrix have a girlfriend? Who were Jimi Hendrix’s girlfriends? Well, it might not surprise you, but he had many throughout his life.

Are there any Jimi Hendrix children around? Did Jimi Hendrix have a son? We only know of one of his kids, James Daniel Sundquist, who was the son of Hendrix and Eva Sundquist.

When did Jimi Hendrix die?

How old was Jimi Hendrix when he died?

Jimi Hendrix was 27 when he died (find out more about the mysterious circumstances surrounding Jimi Hendrix’s death).

It’s rather popularly known that Jimi Hendrix’s age of death was 27, as he is a member of the “27 Club,” the group of musicians who died at 27 that also includes Brian Jones of the Rolling Stones, Janis Joplin, and Amy Winehouse.

How did Jimi Hendrix die?

What did Jimi Hendrix die of? Jimi Hendrix’s cause of death, according to the forensic pathologist who performed his post-mortem, was “inhalation of vomit due to barbiturate intoxication.” That is, he choked on his vomit.

Where is Jimi Hendrix buried? Jimi Hendrix’s grave is at Greenwood Cemetary in Renton, Washington, which is near Hendrix’s hometown of Seattle.