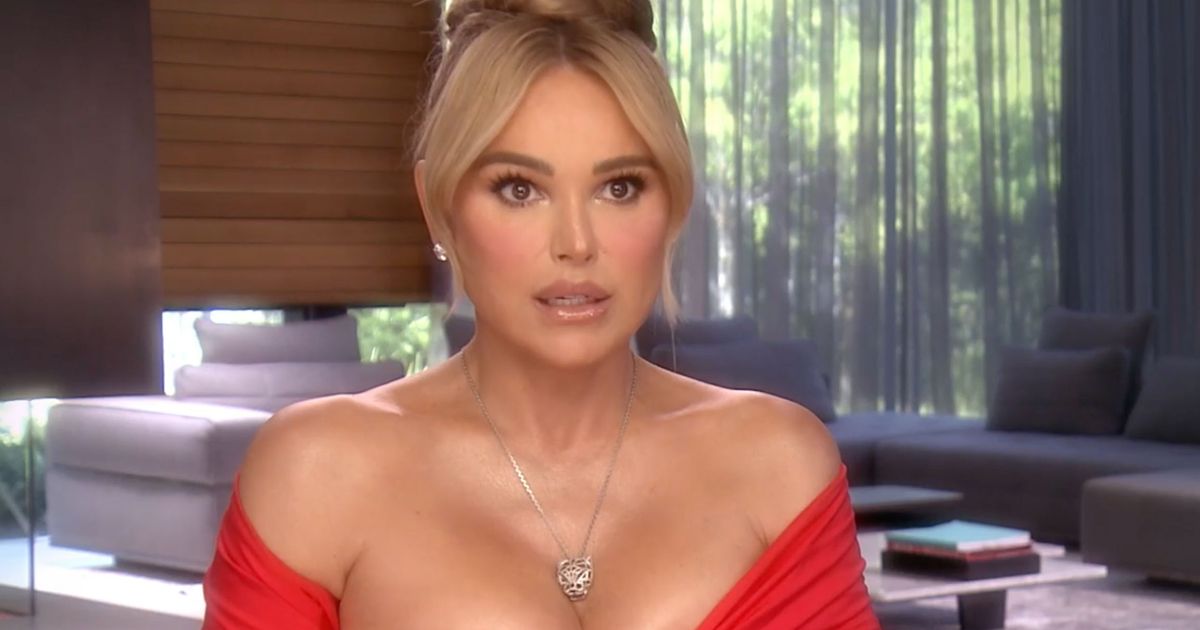 “The only thing better than having it all is having even more!” says Diana Jenkins in her intro for season 12 of The Real Housewives of Beverly Hills. Clutching the show’s signature diamond and giving her best “Housewives twirl” in a bright-red gown, her tagline tells us one thing: She’s rich. (Like, really rich.)

As the season newbie, we’ve seen her donate thousands to charity, parade her designer wardrobe in front of a seemingly penniless (and envious) Erika Jayne, lick her lips a lot, brag about how she never shops in stores (her stylists bring the clothes to her), lick her lips some more (seriously, what’s with that?), throw extravagant parties, and get into fiery confrontations.

We’ve seen a lot of different sides to Diana so far, but there is still an air of mystery surrounding her fairy-tale life. Her story is a rags-to-riches tale that began in war-torn Bosnia and ended in Beverly Hills, with homes around the world, celebrity friends, marriage, divorce, motherhood, and many (many) millions of dollars along the way. It’s too early to know for sure whether Diana will end the season as the “villain” — in a crowded field, she’s the current front-runner. But as season 12 reaches the halfway mark, it’s still all to play for — and here is what we know about Diana Jenkins so far.

Diana was born in Sarajevo, in Bosnia, when the former Yugoslavia was ruled by a communist regime. Her legal first name is Sanela, but she mostly goes by Diana, her middle name. She studied economics at the University of Sarajevo, but the outbreak of war in 1992 forced her to flee her home and spend more than a year in Croatia as a refugee before emigrating to London. Diana shared on RHOBH that her brother, Irnis Ćatić, was killed in the war at 21. Following his death, Diana struggled. She says there was a decade of her life, in her 20s, where she worked low-paid jobs while learning English at night school and had little money. Diana remains close with both her parents, Smajo and Rasida, who eventually moved in with her.

In 1999, Diana married Roger Jenkins, a prominent executive at Barclays Bank in London. The couple met at the gym — which feels very L.A., doesn’t it? Roger was named as the highest-earning banker in London between 2005 and 2009. Their son, Innes, is 22 and describes himself as an “entrepreneur” on Instagram. (It’s not clear what business he is in, though). Innes is reportedly dating Ava Dash, daughter of fashion designer Rachel Roy — that’s right, the rumored “Becky with the good hair” of “Solange and Jay-Z elevator” fame. Their daughter, 19-year-old Eneya, is a competitive horse-rider who spends most of her time training in London.

Diana and Roger announced their amicable divorce in 2009 and remain friends. Diana then started dating 33-year-old singer and actor Asher Monroe, whom she met at a Victoria’s Secret event. The pair are currently engaged and welcomed Eliyanah, their first daughter together, in 2020. Most recently, we saw Monroe twirling his long flowing locks while serenading guests at Diana’s Christmas party (alongside a very tipsy Erika Jayne).

Do you know what often comes after a divorce from London’s top-earning banker? A fat divorce payout! Diana has seven homes and can drop a $25,000 charity donation like it’s a Starbucks order. She even sends her staff — like her stylist Lia Davis, former assistant to Rachel Zoe — to set up all her clothes and make sure her hotel rooms are fancy enough before she checks in. She has more Cartier rings than fingers and toes. When her house was under threat of burning down during the California wildfires, she filled up her car with “Birkins and Banksys” and drove off into the distance. Basically, in the words of Lisa Rinna: “She’s rich, honey!”

But exactly how rich is this self-described “nouveau riche” Housewife? Well, that’s tricky to confirm. Various net-worth websites estimate her net worth to be around $300 million. If correct (and that’s a big “if”), this would make her the richest Housewife on Beverly Hills — and the second-richest cast member (behind “friend of” and caviar enthusiast Kathy Hilton, who apparently comes in at a cool $350 million). Outside of her divorce payout, Diana has her own business interests. She is the founder and CEO of Neuro Brands, a lifestyle-drink company. In 2016, the company was ordered to pay $500,000 in penalties for making misleading claims about the health and nutritional benefits of its drinks. (But for Diana, that’s apparently little more than pocket change.)

Before joining RHOBH, Diana was friendly with castmates Lisa Rinna and Crystal Minkoff. But enough about them; let’s talk about really famous people. Two of Diana’s best friends are Sir Elton John and his husband David Furnish, who shared a supportive Instagram post wishing her luck before the season-12 premiere. Diana has been very involved in John’s charity work. Elsewhere, Diana is pals with Neil Patrick Harris and his husband David Burtka. Her Instagram features friendly snaps with Gerard Butler and Guy Ritchie.

Diana is also friends with Kim Kardashian and says she was in Paris with her on the trip where she was famously robbed in 2016. The lives of the Kardashians and Bravo’s RHOBH stars have long been entwined: Kyle Richards and “the morally corrupt” Faye Resnick, a fixture of the earlier season, are good friends with Kris Jenner. Gigi and Bella Hadid, spawn of ex-Housewife Yolanda Hadid, are pals with Kendall and Kylie Jenner. Amelia Hamlin, Rinna’s daughter, recently dated Kardashian ex Scott Disick. And Diana is also friends with Kathy’s daughter Paris Hilton, who has made several cameos over the years. Beverly Hills is small, okay? 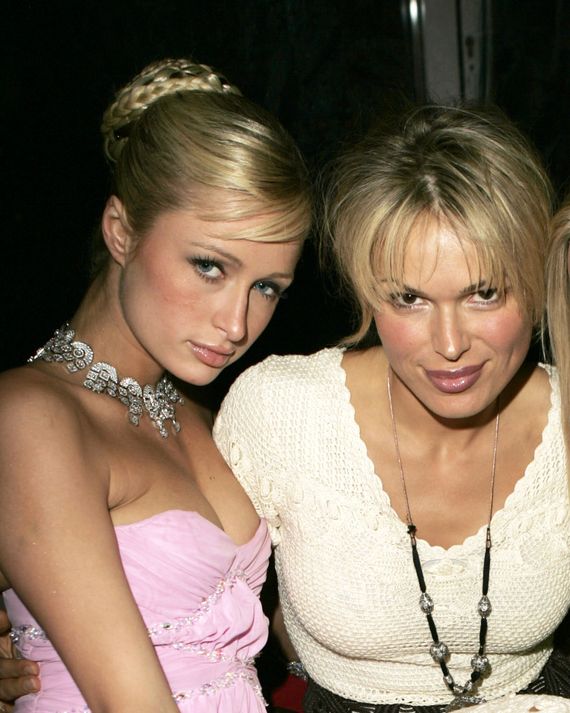 A lot of ridiculous scandals have happened on the Real Housewives franchise, from wives being jailed and arrested by the FBI to allegations of stealing from orphans and running religious cults. So it wasn’t even that surprising when, early this season on RHOBH, Diana was forced to deny that she was a “madam of high-class prostitutes.”

Let’s pause here: In 2009, Diana released Room 23, a 384-page coffee-table book featuring intimate photography of famous stars, from George Clooney and Lindsay Lohan to RHOBH’s very own Lisa. Rumors published in a 2012 Jezebel article alleged that the book was actually “a catalog of clients and call girls” and that Diana herself was running a “secret call-girl ring” for the world’s wealthiest men. Needless to say, Diana has always denied the allegations. “It’s honestly so ridiculous that I can’t even believe it actually could have caught on,” she said this season during a confessional. “It’s very, very dangerous; all you need to do is leave a bunch of fake rumors and you can actually destroy somebody’s life.”

When she’s not licking her lips, Diana is very big on philanthropy, having relied on charities growing up when she was struggling. There are too many of her charitable endeavors to list them all, so we’ll highlight a few. In 2002, she founded the Irnis Catic Foundation in memory of her brother. She also supports organizations that help victims of gendered violence and natural disasters. In 2010, she was honored by the Elton John AIDS Foundation (where she sits on the board) for her activism in the fight against AIDS.

Diana’s biggest beef so far has been with Sutton Stracke, the resident Southern Belle (and fan favorite) of Beverly Hills. She seemed to take issue with the fact that Stracke, a self-described vegetarian, sometimes treats herself to a piece of bacon. Strangely, Diana turned this into a central issue with Stracke’s personality. (If she brings it up one more time, I’m going to scream like Meryl Streep in Big Little Lies).

The tension started on the cast’s trip to Mexico when Stracke shouted at Diana, which made her cry. She quickly apologized, but Diana still asked to sit on the opposite side of the private jet home, as you do. Things were already frosty between the pair when Diana arrived at Garcelle Beauvais’s birthday party in episode nine, where Stracke questioned why Diana was in attendance when she had previously insisted her doctors advised her to take bed rest to recover from a miscarriage. Things quickly escalated; brutal insults were exchanged. Stracke branded Diana a “soulless person,” and she responded by calling her fake and saying, “You need a new villain? Here I am.” (It was pure cinema. Spielberg is shaking!)

In the next episode, the pair did what Housewives do best: go to a medium-tier restaurant for an excruciatingly awkward lunch with a camera crew in tow. Here, things got even worse when it became clear a reconciliation was not on the cards. After a hilariously uncomfortable back-and-forth, the air was very much not cleared.

Elsewhere, Diana shared a post on Instagram calling out Beauvais for saying she was “uneducated.” She was called out by fans after the now-deleted post seemed to imply that Beauvais, who was born in Haiti, should not criticize her because she has donated so much money to charities that help Black women and girls. (Fans accused Diana of having a “white savior complex,” and, honestly? It was a pretty terrible look.)

There will be a lot to unpack and get through before Andy Cohen does his own interrogation on Diana during the show’s reunion later this season. First, we have a trip to Aspen which sounds almost horrifyingly dramatic, a long-awaited showdown between Kathy Hilton and Lisa Rinna, and (probably) more lip-licking from our designer-wearing Diana.

Ruben Randall - July 1, 2022 0
Money
For politicians in the smaller, more self-contained states, being the governor can be a pretty good gig, especially if they’re talented problem solvers. Landing...