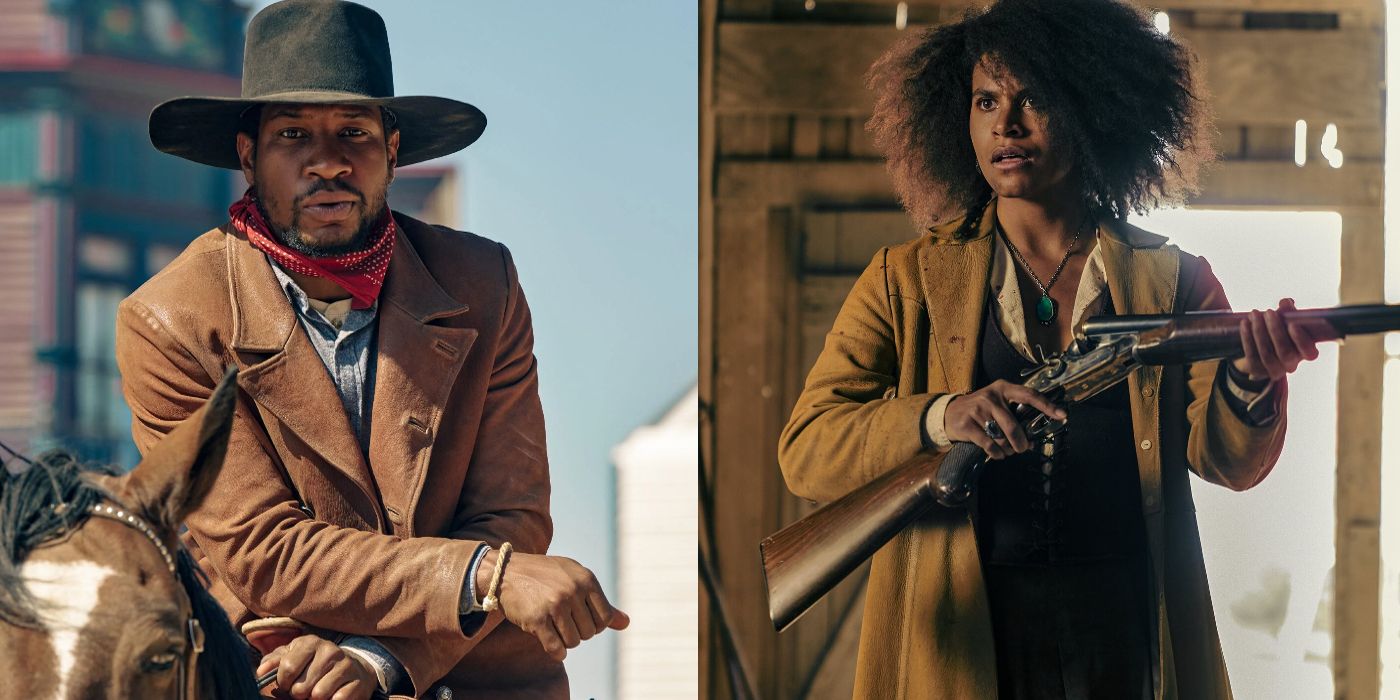 Despite debuting on Netflix last November, the superb neo-western The Harder They Fall is timely as ever. Based on real characters and events that took place during the 1870s-1890s, the story shines a light on heroic Black historical figures like Nat Love, Mary Fields, Bass Reeves, and others who boldly stood up to fight against the iniquitous mores of the times while also serving swift justice to those who killed his parents as a child (even though the events in the movie are highly fictionalized).

Given the various vocations and personal traits of the characters in the movie, it’s easy to see how they might align under the zodiac chart. Though some connections are likely obvious, some viewers may find themselves paired with an unlikely match.

Zazie Beetz gives an inspired performance as Stagecoach Mary Fields in the great must-watch neo-western, a real-life historical trailblazer who became the first Black female star route mail carrier in the U.S. Between her pioneering ways and ownership of a chain of salons in the movie, Mary has all the fearless leadership hallmarks of an Aries.

Known for being ambitious, brave, honest, organized, and extremely self-assertive, Mary exudes all of the traits and more as she risks her life to scout Redwood under the guise of purchasing a saloon, doing whatever she can to reunite with her long-lost love Nat (Jonathan Majors).

Regina King gives one of her best performances as Trudy Smith in the film, the alpha leader of Rufus Buck’s (Idris Elba) vicious gang of outlaws. Aggressive, brazen, intelligent, and stubbornly dedicated to bringing Nat down at once, Trudy has all the trademarks of an astrological Taurus.

Based on the real-life outlaw Treacherous Trudy, Smith demonstrates her biggest Taurean traits when she boldly busts Buck out of a train headed for prison with a smart plan and intrepid execution, vowing to join Buck’s gang and carry out his plans like a faithful soldier. While Trudy can be bullish, the grace she shows under fire reinforces her Taurean nature.

RJ Cyler portrays Jim Beckwourth in the film, a mixed-race fur trapper and explorer who earned the nickname Bloody Arm for his superior fighting skills. Considering how Gemini is often named among the best fighters in the zodiac chart, not to mention how Beckwourth has two different perspectives in the movie coming from both white and black ancestry.

Also known for their loyalty, gallantry, and liveliness, Jim’s biggest Gemini expression comes when he daringly risks his life to save Nat’s life by distracting Cherokee Bill (LaKeith Stanfield) long enough to take a bullet himself.

Delroy Lindo gives an excellent turn as the real-life Bass Reeves in the film, the first Black deputy U.S. Marshall west of the Mississippi River. In addition to really being born in July, Bass’ role as a fiercely protective nurturer of Redwood City clearly makes him a Cancer sign.

Reeves arrests Nat before offering him a chance to avenge Buck, compassionately knowing that it’s the best way to incur justice and keep the peace in Redwood City. His clear-minded mission and tenacity to keep his town safe and secure reinforce Reeves’ Cancerian traits, especially in the way he lovingly deputizes Cuffee (Danielle Deadwyler) in the end for her worthy contributions.

As the tough alpha leader who radiates a regal sense of big-hearted bravery, it’s hard to think of Nat Love as anything but a lovable Leo. Driven by avenging his parents’ death when he was 11 years old, Nat has natural-born charisma that makes his gang members follow him implicitly.

Known for their ambition, courage, drive, loyalty, and dazzling showmanship, Nat’s leonine qualities are demonstrated when he confronts the partner of his parents’ killer, Cortez, as well as when he deliberately goes to jail so he can reunite with Mary and save her life. With the heart of a lion, Nat remains king of the desert in the end.

Deon Cole plays Sherif Wiley Escoe in the film, a dedicated lawman doing his best to keep the peace. Symbolized by the Scales of Justice, Libra signs are concerned with peace, harmony, and a sense of fairness. Sheriff Wiley exudes these traits and more, especially when he returns to Redwood City to stop Buck in his tracks.

Furthermore, Libras tends to be outgoing and gregarious, with comedian Deon Cole brilliantly fitting the bill with his moments of comic relief in the film. However, Escoe’s biggest Libran trait includes turning his back on the criminal Buck and attempting to bring him to justice in the end.

DeWanda Wise appears briefly as Eleanor Love, Nat’s mother who is brutally murdered by Buck in the opening scene. Between her angelic white wardrobe and innocent purity as a loving mother minding her own business, Eleanor clearly has Virgo characteristics.

Also marked by their humility, practicality, and graceful elegance, Eleanor emanates Virgoan qualities in her brief screen time as a kind, caring, and patient mother to Nat. Even in the face of danger, Eleanor shows calmness, which most other zodiac signs would not.

See also  Everything You've Ever Wanted to Know About the Ultimate Christmas Movie, 'It's a Wonderful Life' | Arena

Idris Elba plays one of his best roles as the real-life chief villain Rufus Buck in the film, a wildly charismatic, brave, determined, and secretive leader of men whose valiant ambition aligns perfectly with Scorpio. Beyond the venomous sting of a scorpion, Buck exudes many of the sign’s most positive traits as well.

Nat Love sets out to avenge Buck after he gunned down his parents in front of him, but it’s Rufus’ shocking secret that he’s been holding for years that gives Buck more of a fully-rounded Scorpio personality than previously led on. Not to spoil the big twist, but it’s easier to accept Rufus’ Scorpionic traits once it’s revealed.

Based on the real-life Cathay Williams, the first Black woman to enlist in the U.S. Army and the only one on record to pose as a man while serving, Cuffee has the valiant adventurousness that makes Sagittarius so strong as a zodiac sign. No sign is more of a risk-taker than Sagittarius, and few characters risk as much as Cuffee in the film.

As Mary’s friend and enforcer, Cuffee daringly joins Nat’s gang, brazenly helps him rob a bank without killing anyone and holds her own while trading immense gunfire with Buck’s gang, and even risks her life by quick-drawing with Cherokee Bill in the end, all of which earn her a deputy role alongside Bass.

Damon Wayans Jr. plays Monroe Grimes in the film, the leader of the Crimson Hood gang that Bill Pickett robs at the start. Extremely driven, diligent, organized, and enterprising, Monroe used his persistent Capricorn qualities to become an outlaw leader.

Once Grimes survives Bill and Jim’s ambush, he wisely informs them that the $25,000 belongs to Buck, proving he’s willing to do whatever it takes for his own self-preservation, another key hallmark of Capricorns. Despite his brief appearance, Monroe exudes industrious Capricorn traits that are easy to identify with.

LaKeith Stanfield soars in one of his movies as Cherokee Bill, the real-life sharpshooting outlaw who leads Buck’s gang with Trudy Smith. Clever, creative, self-reliant, and legitimately born in February, it’s no stretch to consider Cherokee Bill an Aquarius.

Although Aquarians can be free-spirited and independent, they also tend to be extremely devoted to their family, which Bill unwaveringly shows in the film by remaining dedicated to Buck’s gang, using his wits and wiles to survive as long as he can. Whether he’s busting Buck from a prison train or preparing to kill Nat, Bill’s unpredictable nature reinforces her Aquarian traits.

Edi Gathegi plays Bill Picket, a real-life sharpshooter who became the star of several rodeo shows as an actor and performer. In the film, Bill unwittingly robs loot from Buck’s gang and feels so bad about it that he races to warn Nat of impending retribution. Between his role as an actor/performer and his sympathetic actions, Bill has all the makings of Pisces, aka The Empath.

While his role is minor, Bill further demonstrates his emotionally attuned Piscean qualities by helping Nat, Bass, and Cuffee defeat most of Buck’s gang in a heated showdown, compassionately laying his life on the line.


A Senior List Writer covering a wide array of topics who has been with Screen Rant since September of 2019, Jake Dee has written movie news and reviews since 2008, working primarily with OMG Horror (IGN), JoBlo.com, and Arrow in the Head as a freelance reporter based in Los Angeles. A hopeless cinephile, social media Luddite, certified Nic Cage doppelganger, and a big Weekend At Bernie’s fan, Jake can often be found tucked away in a dark corner watching an old horror movie.

Born and raised in California, Jake has a Bachelor’s Degree in Film & Digital Media from the University of California Santa Cruz with an emphasis on theory and criticism, is the author of several “WTF Happened To This Movie” and “WTF Really Happened To This Movie” videos on YouTube, and has covered everything in the entertainment industry from set visits, studio luncheons, and red carpet interviews to wrap parties, movie premieres, private screenings, talent interviews, and more.

Ruben Randall - December 18, 2022 0
Money
Creed III director, multifaceted actor, and producer Michael B. Jordan is now embarking on the sports world as a part owner of a soccer...