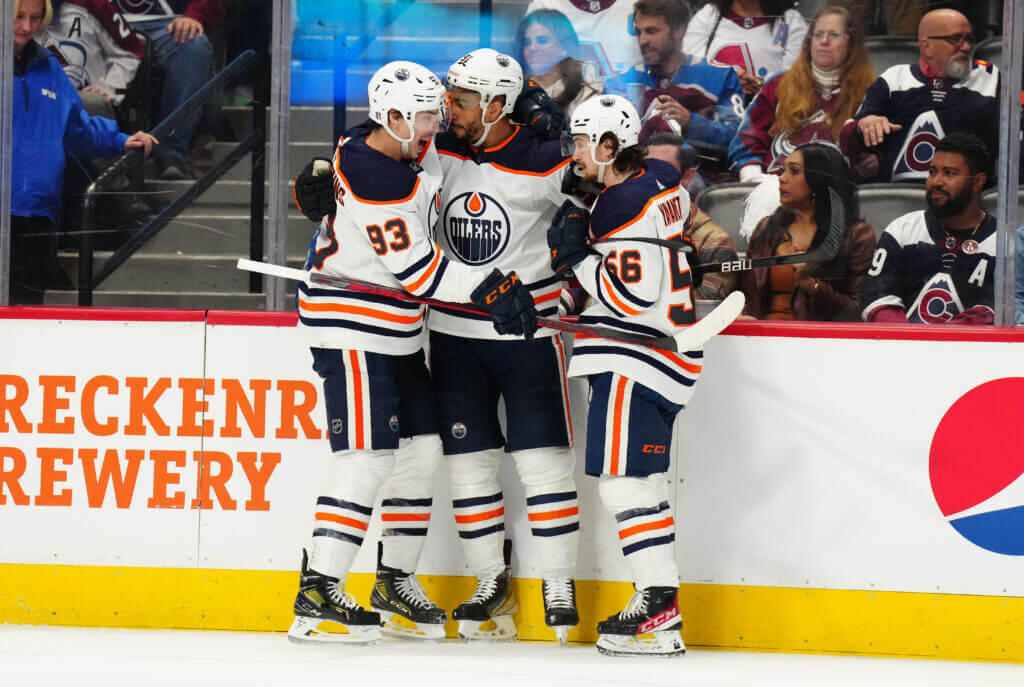 The Oilers just reached the conference final, but the team won’t look quite the same next season.

There’s a big question mark in goal. There are two prominent players who are pending unrestricted free agents. They have three quality young players that need new contracts.

To top it off, GM Ken Holland is working with a limited budget. PuckPedia estimates the Oilers have $8 million in cap space with 15 players under contract, including injured defenceman Oscar Klefbom. He and his staff are going to have to make some tweaks.

Here’s a look at who won’t be going anywhere — and whose Oilers tenures could be coming to an end very soon.

Bouchard led Oilers defencemen in goals (12) and points (43) with very little time as the top power-play quarterback. He could get that role next season while still on an entry-level contract.

After a promising first season in North America, Broberg will be given a shot to make the Oilers in the fall.

Did you watch the playoffs?

Holloway impressed enough through an injury-plagued season that the Oilers were willing to test him in a playoff game — albeit with a depleted forward group. With a full summer of training ahead, Holloway should be pencilled into the opening-night lineup.

Arguably the most impactful leaguewide free-agent signing last summer, Hyman has a no-movement clause and will enter the second season of his seven-year contract.

See Draisaitl, Leon. Oh, and he won his fourth Art Ross Trophy and has four more years left on his contract.

RNH has seven more seasons left on the deal he signed last offseason. He has a full NMC for the contract’s duration. He isn’t going anywhere anytime soon.

Nurse’s big-ticket contract kicks in next season. He had a tough playoff run but was playing through a torn hip flexor. A summer of R&R will have him back as the team’s No. 1 defenceman.

There were times when Ceci played as Edmonton’s top blueliner. He has three more years on his contract. There’s no reason to think he won’t be back.

He might not spend the full season in Edmonton, but the Bakersfield Condors captain signed a two-year, two-way contract last week to remain an organizational staple.

No Oiler improved more than McLeod from the start of the season until its conclusion. He’s expected to be a long-term fixture. The only cause for pause is McLeod is an RFA without arbitration rights and the Oilers lack cap space. Still, there shouldn’t be much to worry about.

Coach Jay Woodcroft has been talking up Niemelainen since last season and the hulking blueliner took another step to play 20 games for the Oilers. He brings a physical element that could allow him to crack the lineup in October. The only way he’s dealt is if a team blows the Oilers’ doors off with a trade proposal.

A respected veteran, Ryan is a reliable faceoff man and penalty killer who can play centre or wing. He has one more year on his contract at a manageable $1.25 million.

Shore didn’t appear in a single playoff game but has another year on his contract at $850,000. He’s expected to hang around as a depth or extra forward.

Skinner had a .913 save percentage and one shutout in 13 NHL appearances this season. When he wasn’t with the Oilers, Skinner was putting together his best AHL campaign — posting a .920 SV% and five shutouts in 35 games. The Oilers would have to waive Skinner to send him to the minors in 2022-23. Put him down as the backup in Edmonton.

The belief is that Samorukov trails Broberg and Niemelainen on the depth chart when it comes to left-handed defencemen. That might make him expendable. But he was also excellent down the stretch in the AHL when healthy. It’s not inconceivable that he pushes Broberg or Niemelainen for a roster spot.

Yamamoto is an RFA with arbitration rights and is four years away from free agency. Amid a cap crunch, it might be difficult for the Oilers to keep him. At the same time, management is earmarking roughly a $3 million salary — and perhaps a little more — for the top-six winger. That’s not a lot for someone who plays that role and appears on both special teams. Woodcroft called Yamamoto a “popular request as a linemate” at the end of the regular season. Combine that with an excellent second half that led to a 20-goal season and the odds are Yamamoto is back. 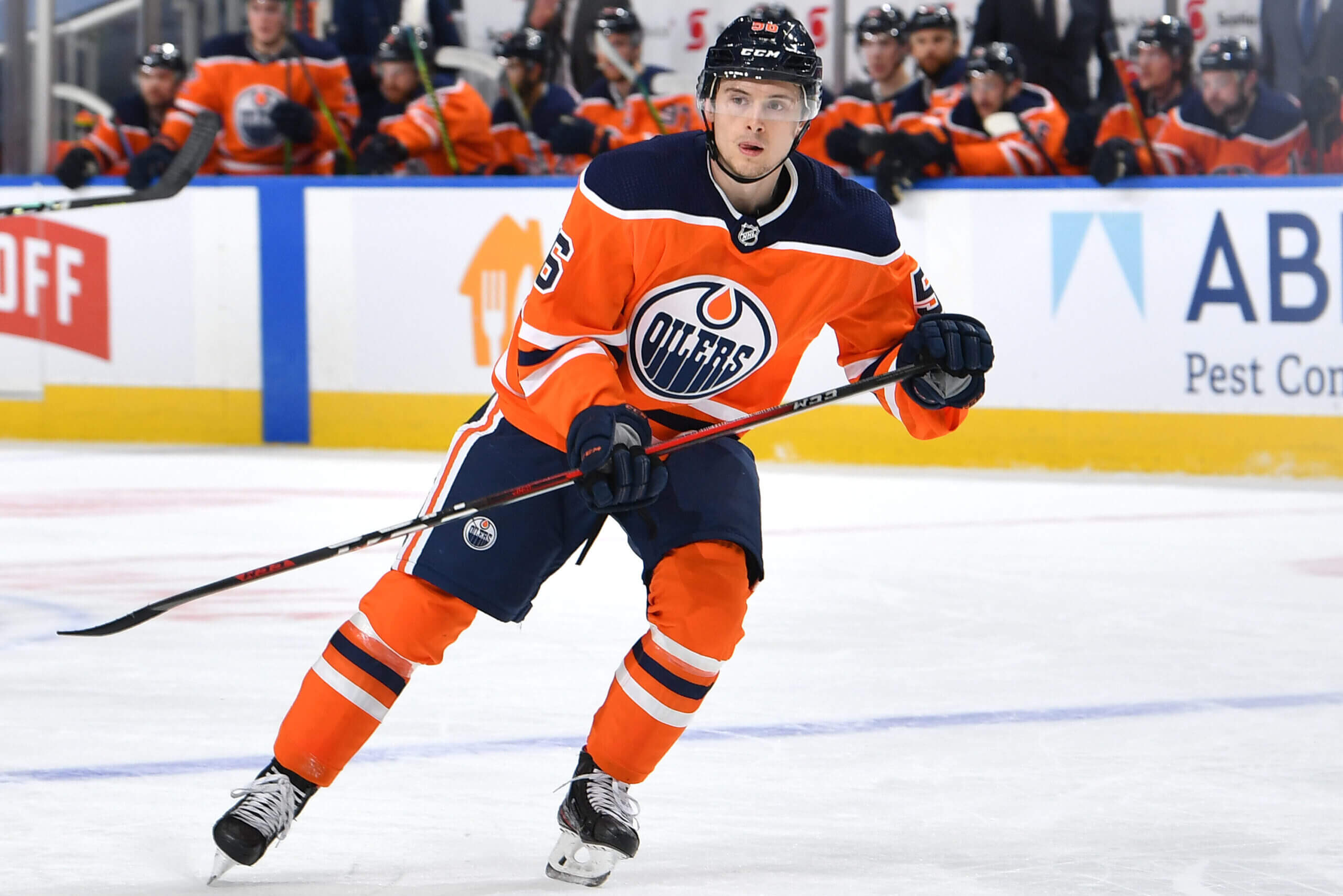 Benson finally cracked the Oilers in his fourth pro season and stayed on the team in a part-time role until he was waived and demoted to Bakersfield in March. The expectation is the Oilers will qualify the RFA and try to retain him on a two-way contract for depth. If that happens, it might be the last chance for the 24-year-old with the organization.

The Oilers are interested in re-signing Kane, who had 21 goals in half a season and netted 13 more in 15 playoff games. There are a ton of pitfalls and roadblocks.

Kane should have more suitors vying for his services than he did in January when he was coming off a lengthy suspension and a contract termination and most teams were capped out. Though Kane said all the right things about the Oilers on his way out, there might be another team that catches his eye. He’ll command more than the $2.1 million cap hit he finished this past season on with the Oilers. Money is tight in Edmonton.

Then there’s the added complication of his contract grievance against the Sharks. NHL deputy commissioner Bill Daly said last week that the grievance might not get settled before free agency opens July 13. Kane could get reinstated to the Sharks. This is a sticky wicket.

Keith has another year on his 13-year contract that comes with a $5.5 million cap hit and a $1.5 million salary. The Oilers are waiting on an answer about Keith’s future. The Oilers would be off the hook for Keith’s cap hit if he retires, but it appears more likely than not he’ll return for his age-39 season. The choice is his alone. The Oilers would welcome him back and Keith has a NMC.

Acquired before the trade deadline, Kulak fit in nicely in a third-pairing role and filled in well in the top four when needed. The Stony Plain, Alta., native is a free agent, and the Oilers would like to have him on the team again. They just need to make the money work. Kulak has a say in the matter, too, of course.

Only the letter-wearers — Nugent-Hopkins, Nurse, Draisaitl and McDavid — and Zack Kassian predate Russell with the franchise. (You can throw in 2016 No. 4 pick Jesse Puljujarvi, too, depending on how you count his two tenures.) After 912 games, the shot-blocking blueliner is in the twilight of his career. Russell is a UFA. Perhaps there’s a one-year deal for roughly $1 million to be had to be the No. 7 defenceman.

Smith expressed a heap of uncertainty about his playing future at his year-end availability. The Oilers are waiting for him to decide if he’ll play next season. Smith, 40, has one more season on his contract that comes with a $2.2 million cap hit. He could retire or potentially go on LTIR if he doesn’t play. A new No. 1 goalie wouldn’t come cheap.

The sense is the Oilers wouldn’t strongly consider trading their power-play quarterback if they had their druthers. Barrie formed an effective partnership with Kulak down the stretch and in the playoffs, so his absence wouldn’t be ideal.

It could come down to the need to clear money. Barrie carries a $4.5 million cap hit for two more seasons. He’s the most expensive Oiler without trade protection or a long-term contract. He also has value in that the Oilers won’t have to pay a sweetener to deal him and can probably get a helpful piece in return, too. He’s a popular teammate, but his days are looking numbered. 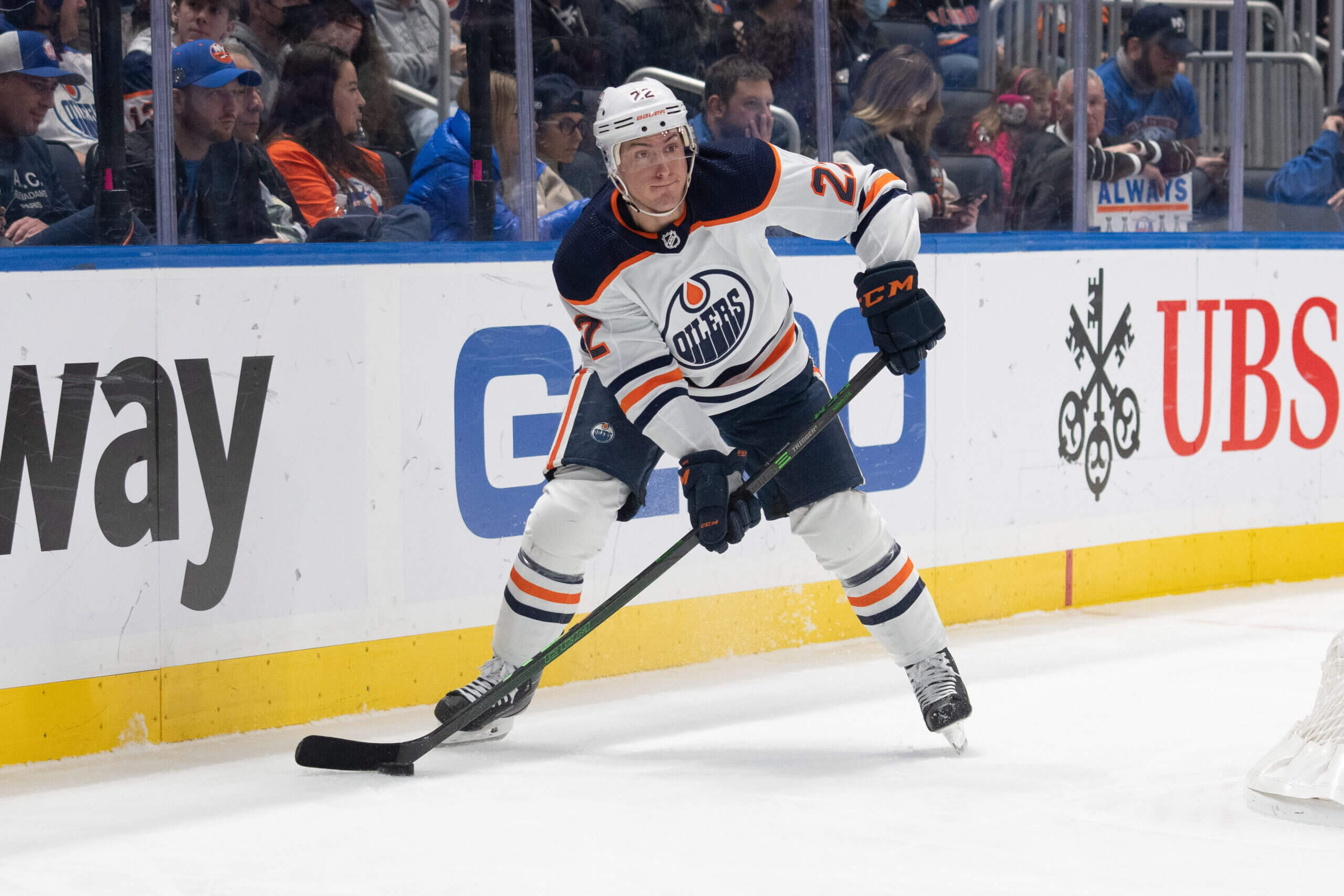 Foegele was the only Oiler to appear in all 82 games this past season, his first with the team, but did so almost exclusively in a bottom-six role. He was then scratched for three games in the playoffs. The 26-year-old has two more years on his $2.75 million AAV contract. That’s a little pricy for someone who barely played on special teams, especially given the Oilers’ cap issues. It might be good to give him another shot, but the Oilers could have trouble affording that opportunity.

There’s no way around it. Kassian has struggled mightily since signing his four-year extension in January 2020. Injuries have played a factor, but underperformance has been the major issue. Kassian has 11 goals over the last two campaigns — 105 games of regular-season and playoff action. That’s not good enough for someone with a $3.2 million cap hit. Kassian has two more years left on his contract. He’s a prime candidate to be dealt or bought out.

The most likely to be traded

In addition to the three players in the previous section, Puljujarvi is clearly on the block. Holland put the hockey world on notice two weeks ago when he said he has a decision to make with Puljujarvi. The right winger has a ton of promise and has great underlying numbers. He also produced at a 0.55 points-per-game clip.

However, his production fell off a cliff in the 2022 portion of the season and he can become a free agent in two years. The Oilers could be looking for a more established player with cost certainty to replace him.

The below-replacement-level winger is coming off a two-year, $1.5 million AAV contract and was scratched three times in the postseason. He’s no longer needed.

Put this down in the nothing ventured, nothing gained category. Brassard cost the Oilers a fourth-round pick at the deadline and wound up being nothing more than a spare piece in the playoffs. He appeared in just one postseason game. Brassard will test the open market as a free agent.

After four years with the Oilers, Koskinen opted against waiting for free agency to begin on July 13 and instead signed with Lugano of the Swiss league.

Marody appeared in one game this season — and had an assist — upping his total to seven NHL contests. Now 25, he’s eligible to sign with any team as a Group 6 free agent. His time with the Oilers is up.

Perlini is an RFA but wasn’t invited to Edmonton to be a black ace once the AHL playoffs concluded for the Condors. He’s not expected to be qualified.

Sceviour was the roster casualty when the Oilers signed Kane in January. He spent the rest of the season in the minors. The 33-year-old is a free agent and is bound for employment elsewhere.

Things just didn’t work out for Turris with the Oilers. He was miscast as a No. 3 centre when he signed a two-year deal in October 2020. A move to the wing didn’t do much to help his plight. He had three goals and nine points in 50 regular-season games across two seasons in Edmonton and didn’t appear in any of the 20 playoff games. A back injury limited him down the stretch as well. The 2007 No. 3 pick turns 33 in August. This might be the end of his career.

Ruben Randall - March 22, 2022 0
Money
What is G-Eazy’s net worth?Net Worth:$12 MillionAge:31Born:May 24, 1989Country of Origin:United States of AmericaSource of Wealth:Professional RapperLast Updated:2021IntroductionAs of 2022, G-Eazy’s net worth is...

Bill Gates Cheated on Melinda Gates Before Divorce: Why They Broke...