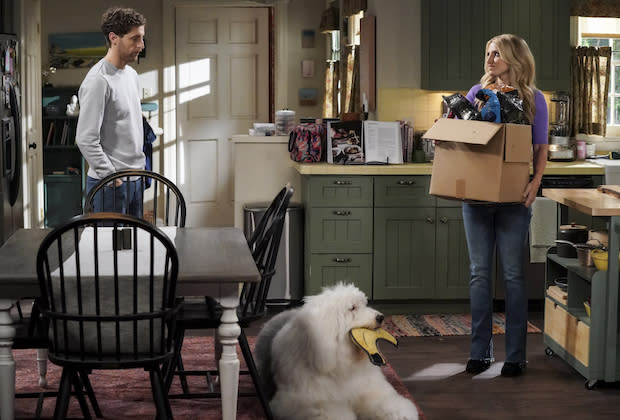 B Positive is going in a whole new direction, complete with a revamped opening title sequence that puts Annaleigh Ashford’s Gina Dabrowski front and center.

Season 2’s third episode — the official start to what executive producer Chuck Lorre refers to as “Chapter 2” of the CBS comedy — revolves around Gina’s first day as the new owner of the Valley Hills retirement home. She also moves out of Drew’s house — a home she has shared with the recipient of her kidney for the better part of a year — then calls on him to meet with Harry (Last Man Standing‘s Hector Elizondo), a short-tempered retiree whose wife, Meredith (A Chorus Line‘s Priscilla Lopez), is dying.

But what exactly is Drew’s role beyond occasionally checking in with one of the retirees? If not Gina’s roommate — or, dare we say, her eventual love interest — what will become of Thomas Middleditch’s eccentric alter ego?

“[Drew and Gina] have a deep bond that keeps him very much a part of the series,” Lorre assures TVLine. “He continues on this journey of self discovery… and he’s going to make some horrible mistakes down the road — the mistakes you make when you’re trying to figure things out. You don’t necessarily figure things out right away.

“The same will apply to Gina,” Lorre teases. “Trying to do good is a wonderful impulse. Not knowing how to do it is hopefully where the comedy is. That was very much a part of what Mom was about: these women growing from selfish to selfless, but not necessarily knowing how to make that transition.”

Lorre also reveals that the next several episodes will focus on fleshing out the rest of the newbies — which, in addition to Harry and Meredith, include Peter (How I Met Your Mother‘s Ben Vereen), a former professor struggling with a failing memory; Spencer (The Ranch‘s Jim Beaver), a retired NYPD transit cop who was a 9/11 first responder; and Bette (The Kominsky Method‘s Jane Seymour), an aging beauty who is incapable of coming to terms with her senior status. After that, the series will establish where returning characters like Drew’s ex-wife Julia (Sara Rue), and dialysis patients Jerry (David Anthony Higgins) and Eli (Terrence Terrell), fit into the new world order.

“We’re really turning this ship around — or, as I like to say, fixing a helicopter while it’s flying,” Lorre says of the series’ soft reboot. “It’s going to require more than three episodes to really dig into all of these relationships and characters. With the invention of an entire new ensemble surrounding Annaleigh’s character in the assisted living facility, that had to be the focus of Episode 3 and the next several episodes, to give the audience a chance to meet and hopefully care for these people. I’m a big believer that if you don’t care for characters in a comedy, it’s not funny.”

Grade the “new” B Positive via the following poll, then drop a comment with your full review.

Ruben Randall - March 19, 2022 0
Money
The Plastic Hearts singer headed the festival alongside A$AP Rocky on Friday, opening the three-day event. In the days leading up to the big night, her...