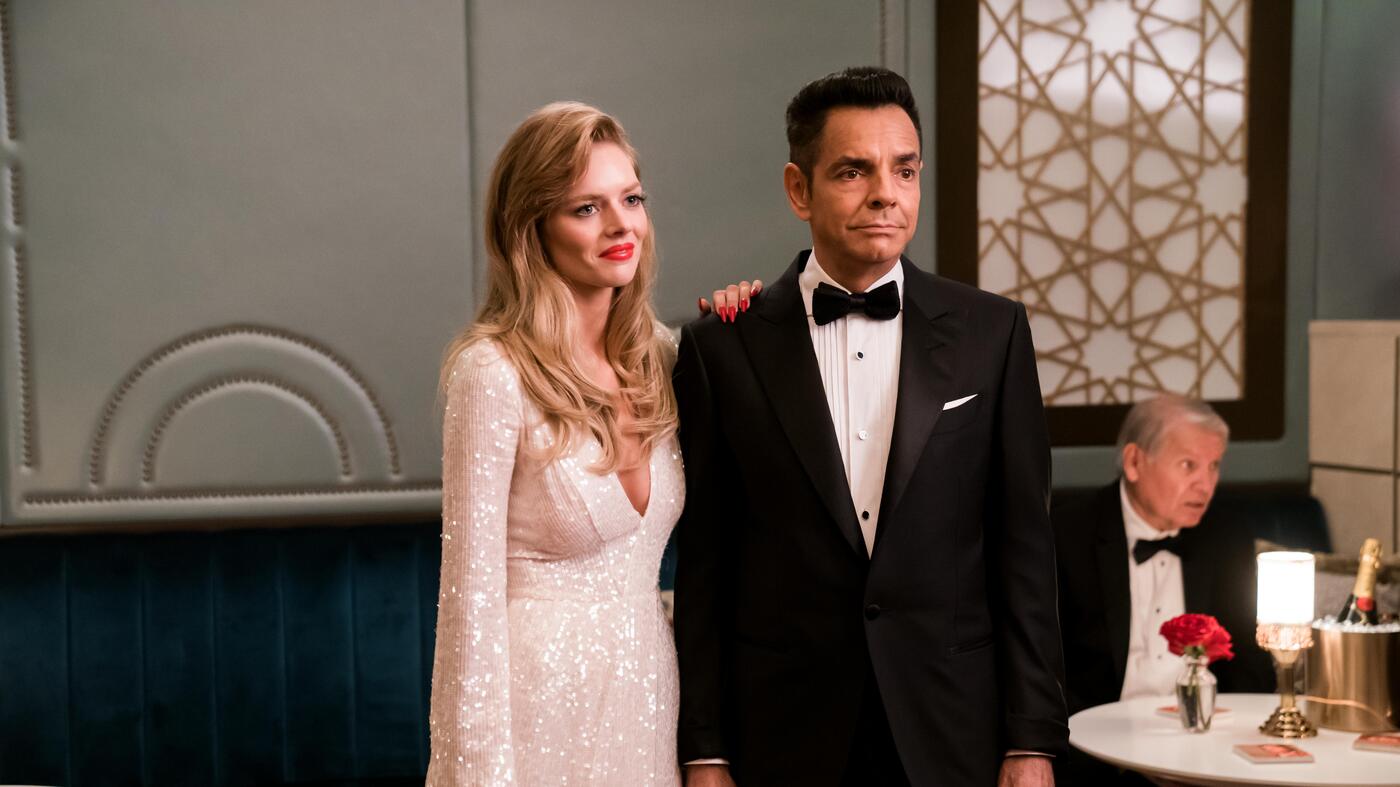 Samara Weaving as Olivia and Eugenio Derbez as Antonio in the new Hulu film The Valet. 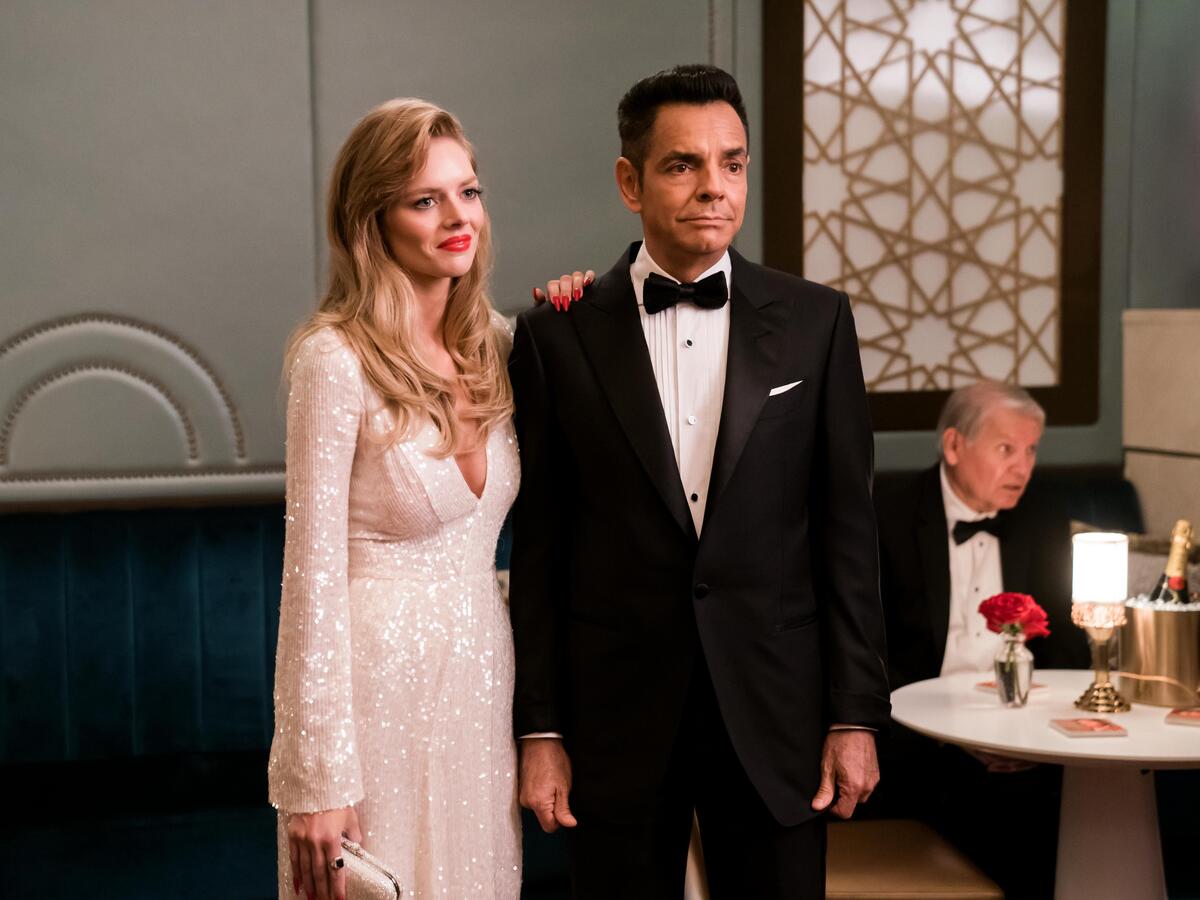 Samara Weaving as Olivia and Eugenio Derbez as Antonio in the new Hulu film The Valet.

This week, Mishael Morgan became the first Black actor to win a lead category at the Daytime Emmys, NYC Pride marched on, and NPR celebrated the best books of 2022 so far.

Here’s what the NPR’s Pop Culture Happy Hour crew was paying attention to — and what you should check out this weekend.

My past month-and-a-half has found me doing a deep dive into the professional world of wrestling. All Elite Wrestling came to Los Angeles, and I decided to pop through to see what it’s all about, since I was never a kid who watched wrestling. I went to see it live, and my life is forever changed. I am fully wrestling-pilled and in the deep end.

I’m watching old episodes of Raw on Peacock and I really like it because it feels like camaraderie. All of the fighting in wrestling I enjoy feels consensual, unlike MMA or other forms of combat. You see them setting each other up for dives and playing off one another. The injuries are real, but whenever somebody gets hit with a chair over their head, they’ve agreed to it beforehand. It feels like I’m watching a community interact with one another.

On the other side of that, there are storylines and character arcs to follow. When I get off work at the end of the day, I’ve been turning on wrestling and kind of zoning out for a few hours. And I find it to be very healing. — Reanna Cruz

The Valet on Hulu

My pick this week is The Valet on Hulu, a new film directed by Richard Wong starring Samara Weaving. She plays this Margot Robbie/ Dakota Johnson-type actress who has a big movie coming out. She gets involved in a scandalous affair, so to tame the tabloids, Eugenio Derbez, who plays a valet in Beverly Hills, is hired to be in a fake relationship with her.

It’s a very fun little film of hijinks, but what I really enjoyed is that it’s about L.A. when you drive east on Wilshire – there’s Pico, Koreatown, Westlake, MacArthur Park — these neighborhoods that are really what L.A. is about.

But the film is also marketed as a rom-com of sorts. In this really beautiful twist, the “rom” does not actually happen between the leads, and it builds up to this emotional climax that made me cry on a Saturday night. I fully sobbed and that alone made the payoff worth it. — Candice Lim 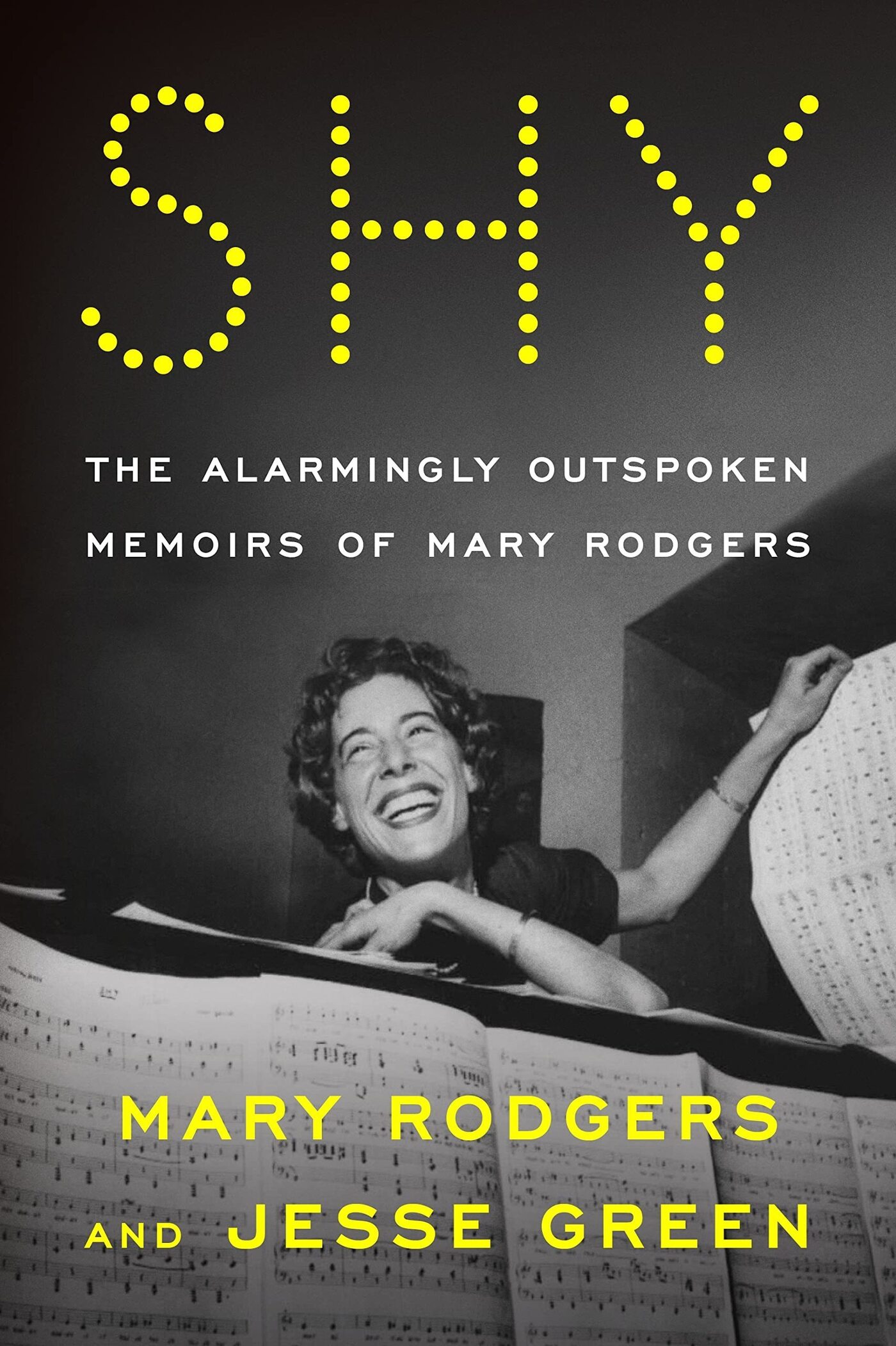 I spent weeks reading a thousand pages of Oscar Hammerstein’s letters for a piece I was doing on NPR’s All Things Considered a couple weeks ago. In the middle of it, I got so into musical comedy of the 1950’s and ’60s that I picked up another book that was sent to me called Shy: The Alarmingly Outspoken Memoirs of Mary Rodgers. Mary Rodgers is the daughter of Richard Rodgers, who wrote South Pacific, Oklahoma!, and all kinds of other things.

Mary Rodgers wrote a show called Once Upon a Mattress, and the big song from that is called “Shy.” But this woman is not shy. “Outspoken” is a good word for her memoir, co-authored by New York Times theater critic Jesse Green. You just can’t imagine anybody saying the things she says about her father in a polite conversation, and she is just breathtaking in her takedowns of absolutely everybody you regard as remotely famous from that era.

And about a third of the book is footnotes. Jesse Green sat with her for months talking this stuff through and footnotes the whole thing in the most acerbic way possible. It’s hilarious, for 400 pages. — Bob Mondello

We just launched season six of Roséwave, NPR Music’s summer series celebrating the best in music for leisure, backyard patios, and just reveling in the simple joys of life. You can stream it through four different services, and our colleague Lars Gotrich even did the kindness of putting together a clean version of this playlist that families can enjoy together, perhaps on long car trips.

Lars oversaw the assembly of this season, which is more genre-diverse than ever before. And with it comes this wonderful essay in which he sets the scene for your enjoyment of the seven-hour playlist. He writes, “You are ready to make Greta Gerwig’s Barbie movie your entire personality.” What could be better than having us all try to evoke the feelings of Ryan Gosling as Ken? It is life-changing and, to me, the total spirit of Roséwave.

It is a wonderful playlist, and all these packages have been marvelous. These are trying times, and Roséwave always brings such a smile to my face. — Stephen Thompson

Kate Bush fans gather to mark ‘The Most Wuthering Heights Day Ever’ in Melbourne on July 16, 2016. 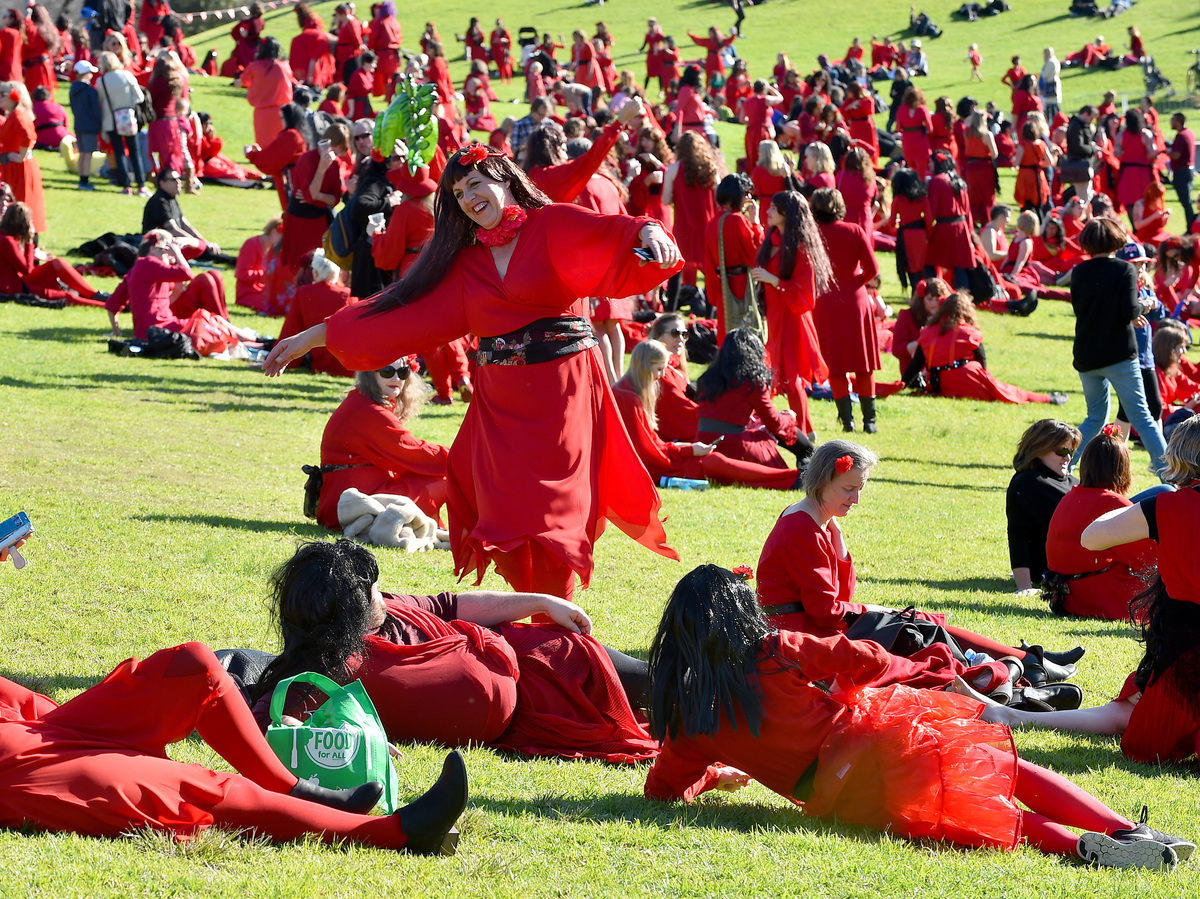 Kate Bush fans gather to mark ‘The Most Wuthering Heights Day Ever’ in Melbourne on July 16, 2016.

It’s time to de-mothball your bright red dresses and mark your calendars for The Most Wuthering Heights Day Ever, the glorious tradition in which folks gather in flash mobs to reenact Bush’s 1978 video for “Wuthering Heights.” This year’s big event — events, really — will take place all over the world on and around July 30, which just happens to be the singer’s 64th birthday. Consult the Internet to find a Wuthering Heights Day near you, and don’t be afraid to gather some friends and start your own.

Amelia Meath is one-third of Mountain Man and one-half of Sylvan Esso. Alexandra Sauser-Monnig is one-third of Mountain Man and the entirety of Daughter of Swords. Together, they’ve recently formed The A’s and released a pair of spare, lovely covers: “He Needs Me” (a Harry Nilsson tune from 1980’s Popeye soundtrack) and the traditional “Wedding Dress.” A full-length album, Fruit, is due out later this year.

We’re still tinkering with it around the ol’ Thompsley household, but we’ve been having fun with a new social-media app called BeReal, in which you post exactly once per day. When given a prompt by the app, you tap a single button to shoot 1) a selfie; and 2) the world as it exists in front of your phone at that moment. Maybe you’re petting a cat, or goggling at the splendor of Niagara Falls, or doing the dishes; the mundanity and unpredictability are part of the charm. It’s a tiny, Wordle-level time commitment; it’s a way to share your world without feeling like it has to look stage-managed and perfect (ahem, Instagram); and you can curate it to a small circle of friends in ways that can make you feel present and connected. I like it. — Stephen Thompson

If you like these suggestions, consider signing up for our newsletter to get recommendations every week. And listen to Pop Culture Happy Hour on Apple Podcasts and Spotify.