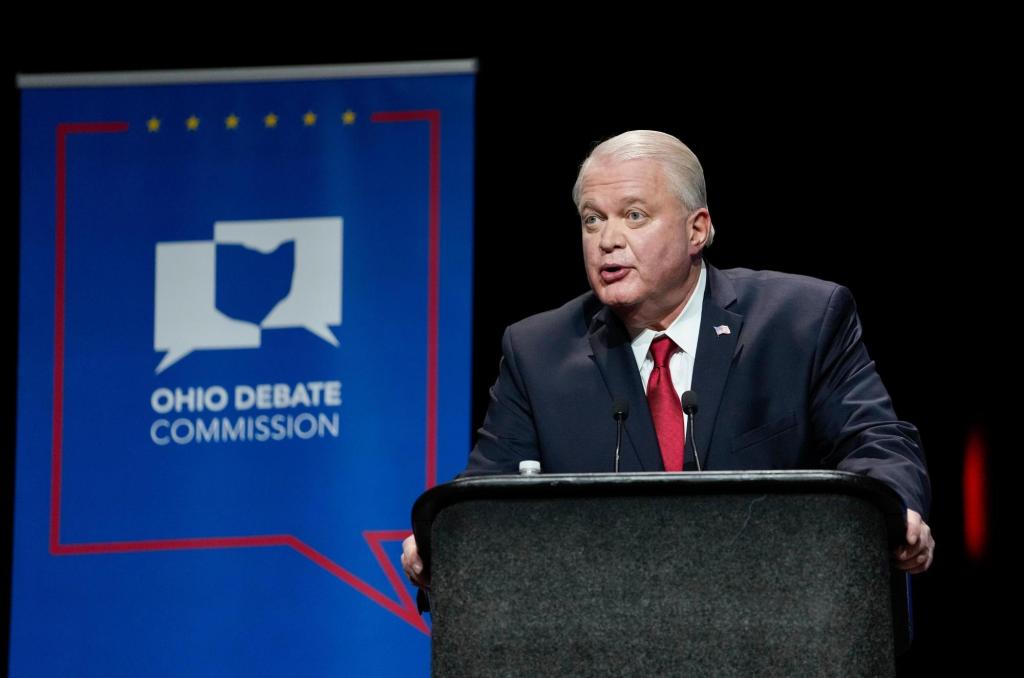 COLUMBUS — The first multistate contest of the 2022 midterm election season unfolds on Tuesday, and in Ohio voters will pick nominees for governor and the U.S. Senate.

The races could provide a fresh window into former President Donald Trump’s sway among the party faithful. He has been especially involved in Ohio’s Senate primary, which has been marred by Republican divisions, along with campaigns for the U.S. House and secretary of state.

For Democrats, a potential threat to incumbent U.S. Rep. Shontel Brown in Cleveland is of keen interest. Brown is locked in a rematch against progressive challenger Nina Turner, a former state senator and surrogate for Vermont Sen. Bernie Sanders’ presidential campaigns. Turner is trying again after losing to Brown in last year’s special election.

Voting in Ohio comes against the backdrop of a chaotic and still unresolved redistricting battle.

What to watch as the primary unfolds:

The campaign has featured months of jockeying among top contenders for Trump’s endorsement, more than $65 million in TV and radio spending, dozens of debates and candidate forums, and one highly publicized physical confrontation between two candidates.

As Vance rides high on the Trump endorsement, other candidates who campaigned on their loyalty to the former president are hoping that heavy ad spending or a strong ground games can help them win. Dolan is the only candidate who ran as a Portman-like centrist, but Timken landed Portman’s endorsement.

IS A TRUMP ENDORSEMENT A SLAM-DUNK IN OHIO?

Trump twice won Ohio by more than 8 percentage points, so many viewed getting his nod in the Senate race as critical to winning the crowded Senate primary. Instead, when he finally chose Vance, it divided the state.

That’s because Vance opponents, including Mandel, Gibbons and their allies, had aired months of ads highlighting Vance’s past anti-Trump statements. Some tea party Republicans protested an April 23 Trump rally featuring Vance, and one conservative group, Ohio Value Voters, urged its supporters to boycott — or boo Vance when he walked on stage. The deep-pocketed Club for Growth, a conservative group backing Mandel, has taken to TV with ads directly attacking Trump for his choice.

WILL A WOMAN BREAK THROUGH IN OHIO’S GUBERNATORIAL RACE?

Democrat Nan Whaley is seeking to be the first woman in Ohio to get a major party’s nomination for governor. The former Dayton mayor is locked in a tight race with ex-Cincinnati Mayor John Cranley, who is endorsed by feminist icon Gloria Steinem.

They see eye-to-eye on most major issues — guns, abortion rights, social justice — but Whaley has repeatedly pointed out that Cranley only recently said he was pro-choice. She also has the backing of the state’s top Democrat, U.S. Sen. Sherrod Brown.

Neither candidate is a household name across Ohio. Both have struggled to draw attention as much of the state is focused on the contentious U.S. Senate race and ongoing redistricting fight.

The big question for first-term Republican Gov. Mike DeWine is just how many conservative voters will punish him for pushing aggressive mandates and shutdowns during the pandemic.

DeWine is widely known from a 40-year career in Ohio politics and in a solid position to win the GOP’s nomination for another four-year term. His two main challengers have tapped into the anger over the governor’s COVID-19 policies, but they’re likely to split those far-right voters.

DeWine isn’t taking any chances, pouring millions into advertising during the weeks leading into the primary. The concern will be whether those same conservative voters who were furious with DeWine will come back to him in November.

A protracted battle over Ohio’s congressional and legislative maps has played havoc with the state’s 2022 election calendar. For a long time, it looked like the May 3 primary wouldn’t go forward amid all the legal wrangling. Then suddenly it did.

Voter advocates, campaigns and political parties have stepped up efforts to get the word out as participation in early voting showed a 40% decline from four years ago.

Tuesday’s ballots will not list state legislative races, which are expected to be decided in a second primary later this year. The Ohio Redistricting Commission faces a deadline next week to try for a fifth time to draw district lines that don’t represent a partisan gerrymander and can meet constitutional muster. If the panel fails, a federal court has said it will force an Aug. 2 primary using one of the previously invalidated maps.

Congressional races have gone forward using a map that has also been invalidated by the Ohio Supreme Court. Ongoing litigation could result in a new map before 2024 elections.

Rodrigo Santoro talks about his rejection of the transvestite role: ‘It wasn’t easy’

Ruben Randall - October 3, 2022 0
Money
Klho Kardashian continues the friction with her sister, Kourtney Kardashian, as this time she took a jab at the product Kourtney recently released, healthy...