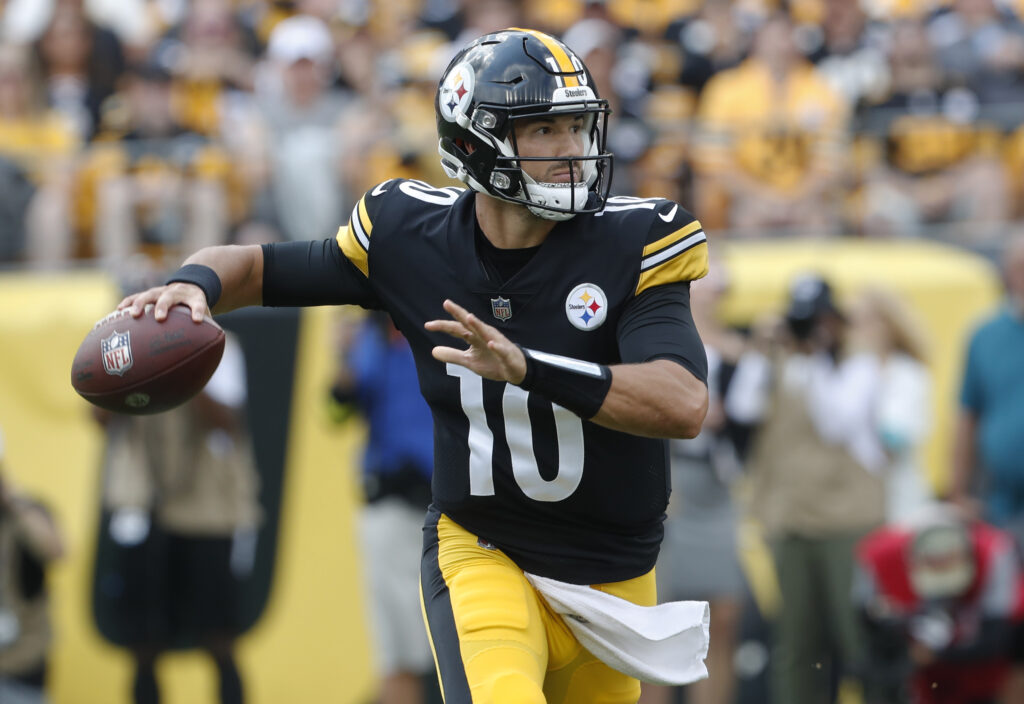 Pittsburgh Steelers QB Mitch Trubisky has climbed some of the highest mountains a quarterback can reach, and yet he’s also seen some of the lowest valleys. Over the course of his winding career, what stops has Trubisky taken, and what have his contracts been along the way?

The No. 2 overall pick

Trubisky’s NFL career started off with a bang. Ahead of the 2017 NFL Draft, he was widely seen as one of college football’s best quarterbacks, if not the top player at the position. The Chicago Bears traded up with the San Francisco 49ers for the rights to the second overall pick and the opportunity to select Trubisky, landing Chicago its presumed franchise QB of the future.

In a draft that saw Patrick Mahomes selected just eight picks later, it’s easy now to criticize Chicago’s decision, but Trubisky had all the elements of a complete QB prospect, and there were high hopes heading into his tenure as a Chicago Bear.

Mike Glennon was Chicago’s starting quarterback heading into the 2017 season. But after starting the year 1-3 and enduring eight Glennon turnovers, the team quickly turned to its much-hyped rookie prospect in Trubisky to provide a spark.

The former UNC star’s rookie season displayed many of the highs and lows that would become synonymous with his career, but Trubisky showed enough promise, especially as a runner, to have the team excited to see what was coming next.

See also  How Rich Are These Past MTV VMA Hosts?

Following the 2017 season, head coach John Fox, who came from a defensive coaching background, was replaced with Andy Reid-disciple Matt Nagy, and fans were chomping at the bit to see what Nagy, a coach lauded for his offensive mind, could do with Trubisky at the helm.

The early returns were promising. Trubisky started 14 games in 2018, leading the team to an 11-3 record and compiling a 2:1 touchdown-to-interception ratio along with 421 rushing yards and an additional three scores on the ground.

His sophomore performance earned Trubisky a nod to the Pro Bowl and a trip to the playoffs, and though that season ended with the infamous “double-doink” kick that sent Chicago home, things were looking up in the Windy City.

The 2019 and 2020 seasons weren’t as kind to Chicago’s starting quarterback. Trubisky won games (he had a 14-10 record as a starter over those two seasons), but his upside was clearly limited, and it didn’t appear as though he was capable of lifting the team around him when the offense wasn’t clicking, or the defense wasn’t performing.

Ultimately, a combination of injuries and middling play left the team convinced that, following the 2020 season, it would be time to search for a QB upgrade.

Trubisky was set to be a free agent heading into the 2021 offseason because Chicago declined his fifth-year team option the year prior, and his future in the NFL, though certainly not over, was uncertain.

Backing up Josh Allen in Buffalo

On March 31, 2020, just a couple of weeks into free agency, Trubisky signed with the Buffalo Bills to back up the ascending Josh Allen. He played sparingly in relief of Allen, mostly when the Bills were already well ahead and icing a victory.

Trubisky represented a high-end insurance policy with the Bills, and even the team knew that Buffalo was likely a one-year stop-gap destination for the former first-round pick. At one point, even head coach Sean McDermott said that Trubisky was “going to be a starter somewhere in 2022.”

A second chance in Pittsburgh

McDermott was right. At the start of free agency in 2022, Trubisky signed a two-year deal with the Pittsburgh Steelers to be the team’s presumptive starting quarterback. Pittsburgh would go on to select Kenny Pickett in the first round of the 2022 NFL Draft, but Trubisky retained the starting job heading into the regular season.

Though Pickett is the future of the quarterback position (at least on paper) in the Steel City, the 2022 season represents a second chance for Trubisky to convince the rest of the NFL that he can carry a franchise to great heights.

Trubisky’s net worth and contracts

As a former first-round pick, Trubisky was one of the highest-paid players in the 2017 NFL Draft class. Now in his sixth NFL season, Trubisky has amassed career earnings of $45,971,690.

Soon after being selected second overall in the 2017 NFL Draft, Trubisky signed a four-year contract with the Bears worth roughly $29 million. The contract included a fifth-year team option, but Chicago declined that option.

Trubisky’s deal with the Buffalo Bills was for one year and was worth $2.5 million, with $2 million guaranteed at signing. The deal allowed him to enter the 2022 offseason as a free agent.

In the 2022 offseason, Trubisky signed a two-year, $14.285 million contract with the Steelers. The deal has $5.25 million in guarantees. His cap hit for the 2023 season, should he remain with the team, sits at $8 million. If Pittsburgh chooses to release Trubisky next offseason, the team would take on a $2.625 million dead cap hit. He is currently set to hit the free agent market in the 2024 offseason ahead of his age-30 campaign.

Neighbours rich list revealed – from singer with $1BILLION fortune to...