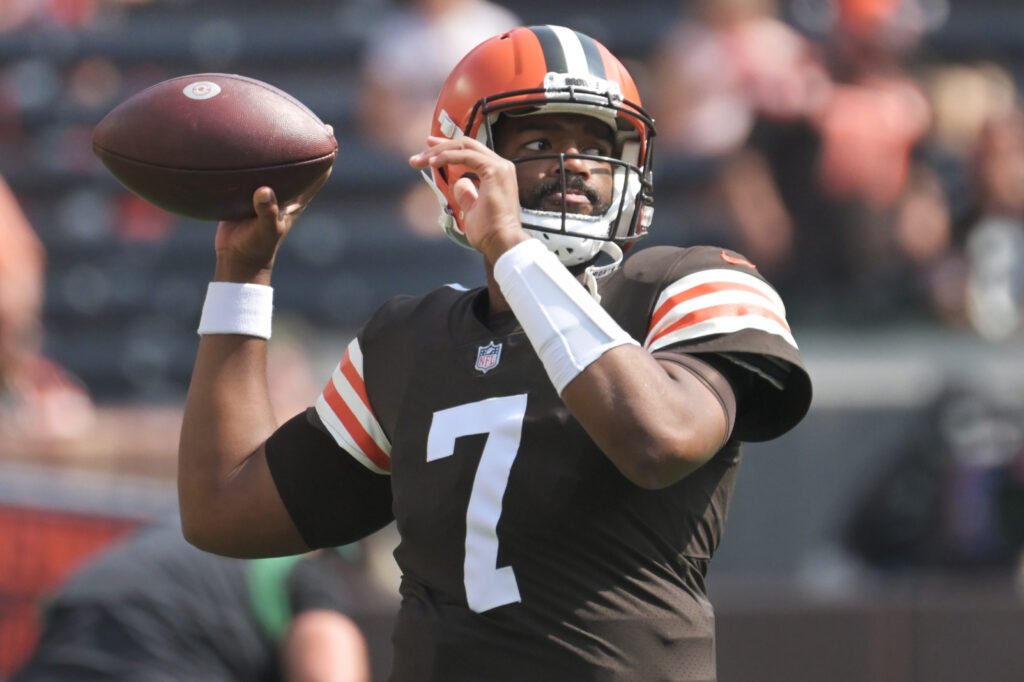 After he departed from the Miami Dolphins last season, QB Jacoby Brissett signed with his fourth team in seven seasons in the offseason. Let’s break down where the former NC State QB has taken snaps under center in the NFL and look at his career earnings so far.

While four teams in seven years is not the craziest NFL journey to see, it is a head-turner. Brissett’s career has seen some ups and downs, including a trade, a lucrative extension, and a transition to life as a backup.

After two successful seasons as the starting QB of the North Carolina State Wolfpack, Brissett generated some buzz in a 2016 NFL Draft class that featured Carson Wentz and Jared Goff. New England selected Brissett in the third round with the 91st pick.

It wouldn’t be long before Brissett made his NFL debut, entering the Patriots’ 2016 Week 2 game against the Dolphins after Jimmy Garoppolo sprained his AC joint. Where was Tom Brady, you ask? Brady was serving a four-game suspension following the “Deflategate” investigation. Brissett started the next two games, with Brady taking over in Week 5.

Brissett suffered a thumb injury in his first win as a starting QB against the Houston Texans in Week 3 but would play the Bills the following week. When New England needed a roster spot for Brady in Week 5, Brissett had thumb surgery and was placed on injured reserve until Week 15.

During the 2017 offseason, Colts QB Andrew Luck underwent surgery on his shoulder due to issues from a previous injury. His rehab took longer than expected, and Luck would miss the 2017 season. In a rare player swap, the Colts sent WR Phillip Dorsett to the New England Patriots in exchange for Brissett.

Scott Tolzien started the season opener against the Los Angeles Rams in 2017, but Brissett would take over in Week 2 and remain the starter. He threw for 3,098 yards, 13 touchdowns, and seven interceptions as the Colts stumbled to a 4-12 record. After Luck recovered from his shoulder surgery, he would return to the backup role in 2018.

Expecting to spend another season as the backup in 2019, Brissett was thrust into the starting position following Luck’s surprise retirement from the NFL. On the same day he was traded two years earlier, Brissett signed a two-year, $30 million contract extension on Sept. 2.

He would lead the Colts to a 7-8 record, missing one game due to injury. Brissett completed just under 61% of his passes for 2,942 yards, 18 touchdowns, and six interceptions.

The following season, Indianapolis brought in Philip Rivers to elevate the performance at QB. Brissett stayed with the Colts as Rivers’ backup, appearing in 11 games, primarily for rushing attempts. Indianapolis moved on from Brissett the following offseason.

A weird year with the Miami Dolphins

Brissett signed with the Dolphins in the 2021 offseason, reuniting him with former New England assistant coach Brian Flores. Tabbed to be the backup to QB Tua Tagovailoa, Brissett saw the field much earlier than expected yet again. After a rib injury forced Tua out of the Week 2 game against the Buffalo Bills, Brissett took over and would start the next three weeks.

Tua would return in Week 6 only to miss time again following a fracture in his throwing hand. Brissett played against Houston in Week 9 and started Week 10 against the Ravens. However, he would not finish that as Tua replaced him in the second half. Miami was 1-4 in games where Brissett took 75% or more of the snaps.

Brian Flores was fired following the season. With Mike McDaniel pushing his chips behind Tua and bringing in Teddy Bridgewater, Brissett was looking for another gig after just one season.

Brissett heads to the AFC North

After signing with the Cleveland Browns, Brissett joined his fourth team this past offseason. The deal came just one day after the Browns traded for QB Deshaun Watson, whose unresolved legal issues created uncertainty about his availability to start the season. When the Browns signed Brissett, he was the backup. However, just like his past destinations, he’s found a substantial starting opportunity quicker than expected.

No one knew how long Watson would be suspended, and when the initial six-game sentence was handed out, it did not pose a significant threat to the Browns’ season. However, NFL commissioner Roger Goddell appealed the suspension wanting it to be longer, and the punishment was extended to 11 games. While Brissett hasn’t been awful, Cleveland has struggled against inferior opponents so far this season. If Brissett can’t get things going, the Browns may be forced to make a change while they wait out Watson’s suspension.

Jacoby Brissett’s net worth and contracts

Brissett has earned a fair bit of money despite jumping around the league so often. His ability as a starter may have limited him to backup potential, but he always finds the right timing to sign his contracts. Brissett reportedly has career earnings of $41 million. Here’s a breakdown of how he has earned that money during his career.

As mentioned earlier, Brissett began his career with the Patriots. He signed his four-year, $3.4 million rookie deal in June of 2016. The Patriots would go through one year of the agreement before trading him to the Colts.

Indianapolis offered Brissett a two-year, $30 million extension in 2019. The extension would keep Brissett with the Colts through the 2020 NFL season while also upping base salary by 272% compared to 2018. He would also receive a $7 million roster bonus in 2020.

Brissett has signed more team-friendly deals in the last two years as his role has changed from starter to backup. In the 2021 offseason, Brissett signed a one-year, $5 million deal to be the backup in Miami. In 2022, he signed a one-year, $4.65 million contract with the Browns.

While these are much higher than his rookie deal, they pale in comparison to the monster extension from Indianapolis. At this point, barring a career breakthrough, Brissett should expect his contracts to remain around these numbers for the foreseeable future.

Zachary Knerr is a contributor to Pro Football Network. You can find him on Twitter @ZachKnerr