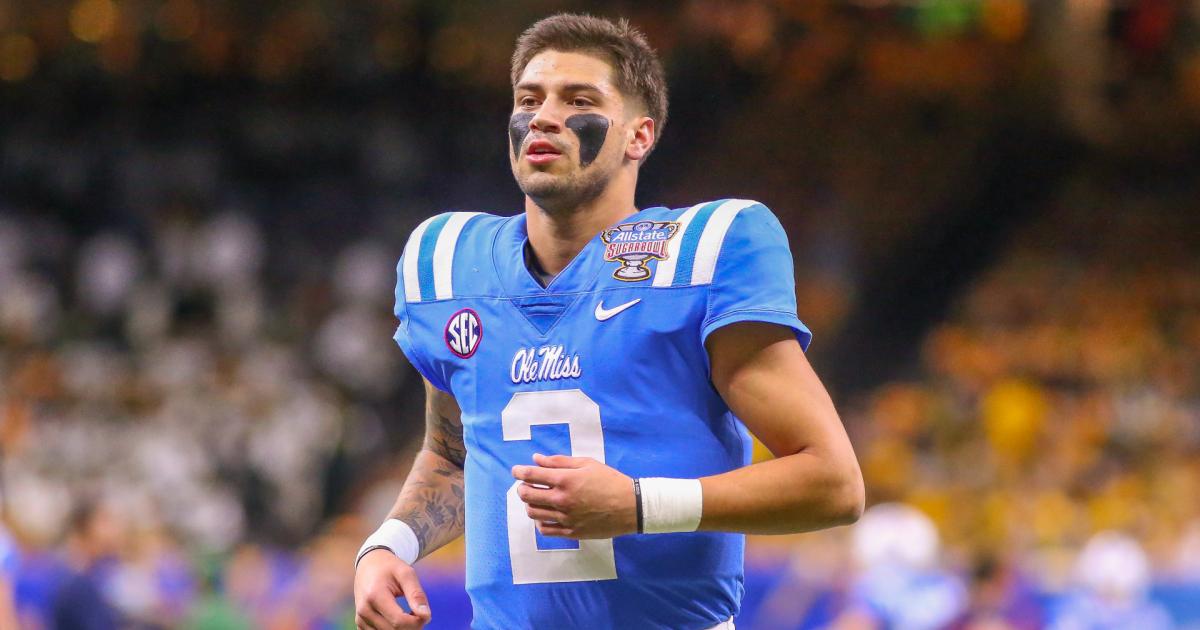 Have the Panthers have corralled their QB of the future?

Carolina added some more confusion to their quarterback room on Friday night, taking Ole Miss passer Matt Corral with their third-round selection (No. 94 overall) on Day 2 of the 2022 NFL Draft.

Corral was considered by some to be a top passer in the draft; however, injury, interview struggles, off-the-field issues (per Ian Rapoport) and a general lower ceiling than most QB prospects in recent years sunk Corral’s draft stock all the way to the third round.

Rapoport, though, reports that the Panthers loved Corral’s tape, feeling that he was the best passer available in the draft. (To be fair, what else were they supposed to say?)

The selection comes in the midst of QB turmoil in Carolina: The Panthers have been hot after improvements to their QB depth chart during the Matt Rhule era, but the moves haven’t quite worked out yet. The team traded second- and fourth-round picks to the Jets for Sam Darnold in 2021, passed on QB talented in a loaded 2021 NFL Draft, embarked on a (failed) reunion tour with Cam Newton and moved on from Teddy Bridgewater, all over the last two seasons.

That still leads the question: Is Corral QB1, or is he just another name on the board for Carolina? Here’s what the move means for their current situation:

Carolina was pegged as one of the last few landing spots for quarterback Baker Mayfield, who is still waiting for an exit strategy from Cleveland. Mayfield may have seen another landing spot disappear with the Corral selection.

Panthers general manager Scott Fitterer said in no uncertain terms that the Corral pick closes the door on acquiring a veteran passer like Mayfield on Thursday.

Panthers GM Scott Fitterer says getting Matt Corral takes him out of the market for a veteran, namely Baker Mayfield.

While Carolina was a viable option for Mayfield entering the weekend, a potential deal between the Panthers and the Browns hit a snag in negotiations.

Multiple reports suggest that the issue was over Mayfield’s paycheck, with the two teams trying to decide how to split his salary, and not coming to a satisfying solution during the draft:

I’m told the Baker Mayfield talks between the #Panthers and #Browns are halted. The two teams have not been able to come to terms on dividing up Mayfield’s $18.8 million in guaranteed money next season.

Mayfield is owed $18.8 million, all guaranteed, for the 2022 season, his last season under contract.

Rapoport originally reported that talks between the Panthers and the Browns have “stalled” — maybe leading to some hope for the Panthers that a potential deal might get done.

What’s next for Sam Darnold?

Darnold might only be traveling to and from the bench and the bank in 2022.

With Corral entering the picture, there’s a good chance that the two will battle it out for QB1 this year, as long as another quarterback doesn’t enter the fray.

If that happens, the Corral will likely be duking it out with whoever else is holding “The Duke” — and that probably won’t be Darnold.

After the Panthers traded for Darnold in 2021, the team picked up his fifth-year option, which is fully guaranteed this upcoming season: Darnold is set to make $18,858,000 in the last year of his deal after an ineffective and injury-riddled 2021 season.

If Darnold is hit with his walking papers, then Carolina will incur that dead cap charge of the full $18.858 million, something that they might want to avoid, even if for one season.

So, expect the 2022 offseason to be Darnold’s last, best shot at starting for an NFL squad, but the odds certainly aren’t in his favor.

Oilers depth chart: Where did they improve and where can they make more moves?