The Real Housewives of Atlanta star Kandi Burruss, 45, has had enough careers for an entire cast of Housewives. From her start as the member of a successful R&B group to her current role as a reality television star and restauranteur, Kandi has truly done it all. And now, her latest show Kandi & The Gang promises viewers a peek inside her family life and entrepreneurial projects.

Of course, all those jobs and side hustles add up over time—not to mention that Kandi is one of the highest-paid Housewives on Bravo. So, what exactly is her net worth?

Here’s absolutely everything to know about how Kandi makes money:

Kandi’s music career began when she was still in high school.

When she was 15, Kandi appeared on Teen Summit, a BET talk show featuring performances from hip-hop and R&B artists, per Celebrity Net Worth. Then, she formed the group Xscape with Tamika and LaTocha Scott and Tameka “Tiny” Cottle.

The four were signed to Jermaine Dupri’s record label, So So Def Recordings, and their first album Hummin’ Comin’ at ‘Cha was released in 1993. The group continued to release singles and albums, while Kandi graduated in 1994. And, as the years went on, many of their songs became gold and platinum certified (which means they sold lots of copies, among other things, per the Recording Industry Association of America).

Kandi and the other Xscape members in 2019.

Then, Kandi switched to songwriting.

Kandi was a co-writer on many of Xscape’s songs, but once the group broke up, she went off on her own. “I went from feeling very secure in my finances to feeling very not secure,” she told Entertainment Weekly. “The push of going hard and writing these songs really came out of necessity to survive because of my group falling apart, not knowing what the future held.”

You’ve probably heard some of the songs Kandi helped write, like TLC’s “No Scrubs” and Destiny Child’s “Bills, Bills, Bills”. And, in 2000, “No Scrubs” won a Grammy for Best R&B Song. “When I tell you that was the most amazing feeling in the freaking world,” Kandi explained. She also won ASCAP Songwriter of the Year for her work.

“Having that success, having the two Grammys, becoming Songwriter of the Year, and all these other things, it really showed me that sometimes things happen in your life to force you to go and take the step that you were supposed to take anyway,” she said.

It’s unclear exactly how much income Kandi makes from songwriting, but with credits on such huge hits, her royalties have likely added up over the years. (She’s also worked with Whitney Houston, Ed Sheeran, Alicia Keys, Ariana Grande, and Mariah Carey, just to name a few.)

In the 2000s, Kandi started releasing her own songs.

“The goal with Kandi Koated was to make an album that people will play all the way through,” Kandi told Reuters. “As a songwriter, I don’t want to hear people say there are only one or two hot songs and everything else is just ‘eh.’ I’ve waited so long to come back that I had to give people an album worth my coming back. Otherwise, what would be the point?”

Kandi’s songs have hit the Billboard charts a few times, so it’s safe to assume she sold plenty of albums.

Kandi has been a recurring cast member of The Real Housewives of Atlanta since the show’s second season in 2009, per Reuters. (ICYMI, there are 14 seasons total.) She’s said in the past that the show helped boost her music career:

“The show definitely helped as far as being in a position to do a solo album; it’s a big infomercial,” she told Reuters. “Having not done an album in so long and wondering who’s going to be interested in what you’re doing can be discouraging. But you never know what’s going to fall into your lap.”

Housewives salaries can vary, but they usually increase for cast members who have been on the show for multiple seasons. Kandi’s current RHOA salary totals $450,000 per season, according to Celebrity Net Worth. At one point, she was the highest-paid Housewife ever—that title has since gone to Lisa Vanderpump from Beverly Hills.

Since her first RHOA season, Kandi has also appeared on Who Wants To Be A Millionaire, Are We There Yet?, Single Ladies, and The Chi, among other shows, per IMDb. She’s also starred in her own Bravo spin-off series called The Kandi Factory, and her latest spin-off Kandi And The Gang premieres March 6, 2022.

While her RHOA salary might be the highest, Kandi probably also makes a decent paycheck from her other television shows and appearances. 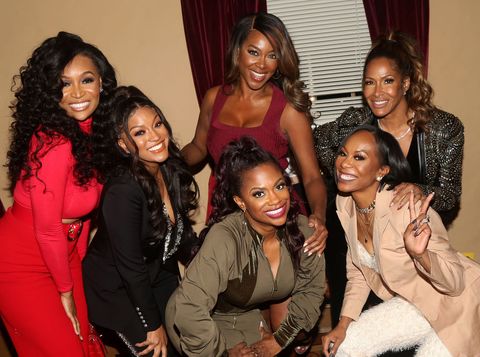 Now, Kandi runs her own business and record label.

Kandi also runs Kandi Koated Entertainment, a record label. She started Bedroom Kandi, a line of sex toys, in 2011, according to the brand’s website: “At the time, the line launched with only five products; now, it features hundreds, from intimate toys to bath & body to cosmetics, with something for everyone!”

And, Kandi went on tour in 2019—Kandi described the show as “a very wild, over-the-top costume party and variety show.” “I wanted to make people’s mouths drop,” she told Variety. All of these side hustles definitely add to Kandi’s already impressive revenue streams.

She’s also let it slip that she might write a book or two in the future. “Everybody wants a book about business, and I’m like, ok, well, is that fun? I mean, I guess everything isn’t supposed to be fun, but then I get to thinking about the business, about writing a book about a business.”

“The question for me is, if I do a book about the business do I want to do the book through a major publishing house so that it can be promoted around the world or do I want to self publish my book so that I can make all the money from it? And it may not have as big of a worldwide spread but I’ll probably make more money,” Kandi said, per Bravo.

See also  The biggest in-season trade for every NFL team

Clearly, she has the skills (and the killer sales)—so a book could very well be in her future.

And, she and her husband own two restaurants.

Kandi and The Gang follows Kandi’s family as they run Old Lady Gang, a restaurant in Atlanta, Georgia. “On Kandi & the Gang you’re gonna get plenty of laughter because my family and the people that work in my restaurant, they are all like walking comedians,” she told E! News.

“Of course, you’re gonna get your share of drama and emotional moments. I think the thing about Kandi & the Gang is, because my family is a part of the restaurant, it can be a bit stressful at times.”

Kandi and her husband Todd Tucker also have a second restaurant called Blaze Steak & Seafood, named after their daughter Blaze, according to Essence. Kandi and Todd actually met on the set of RHOA, where Todd worked as a line producer, Newsweek reported.

The successful eateries no doubt fill tables, helping both Kandi and Todd make plenty of cash.

So, how much is she worth?

Kandi’s net worth totals $30 million, according to Celebrity Net Worth. That makes her wealthier than Shannon Beador from The Real Housewives of Orange County—but neither of their fortunes comes close to Beverly Hills star Kathy Hilton’sgigantic $350 million net worth.

Ruben Randall - March 7, 2022 0
TV/Movies
I was outside of the WOKQ studio in single-degree digits. No coat. Ringing the bell over and over again. Waiting... Waiting for someone...Waiting for anyone...