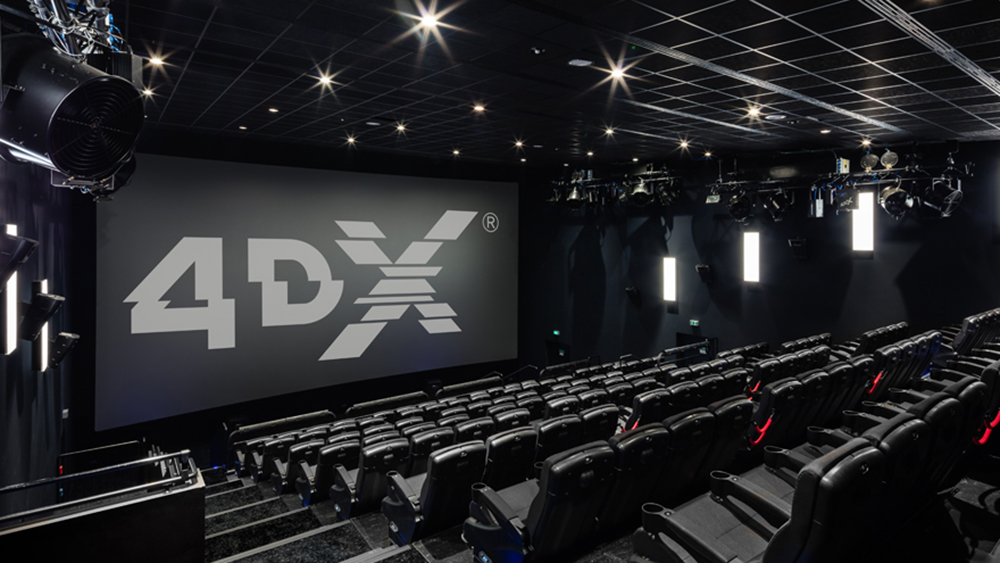 When audience members take their seats to watch “Bullet Train” in a 4DX auditorium this weekend, they will be greeted with a choice. Within the armrest lies a small button that allows viewers to toggle between two options: “Water On” and “Water Off.” The device serves as a harbinger – and, to 4DX novices, perhaps a warning — of the full-tilt sensory experience that is about to unfold as Brad Pitt fights for his life against an army of opposing assassins.

With streaming and other at-home entertainment competing for consumer attention, 4DX employees see the format as an extra incentive to lure audiences to movie theaters. Korean parent company CJ Group first conceived of the technology as an answer to the question of how to innovate the moviegoing experience and make it more essential in the public’s eyes.

Over the course of “Bullet Train,” Pitt will get socked, stabbed, chucked and chased as he untangles a complicated web of conflicting hit jobs. Those who decide to see the film in 4DX will experience each movement onscreen as a motion in their seats, which shake and wobble to the rhythm of the action.

“We have what we officially call the three degrees of freedom — our chairs move with the pitch (a forward-and-backward rolling motion), the yaw (a left-and-right turning motion) and the heave (an up-and-down elevating motion),” explains Paul Kim, SVP of content and production at CJ 4DPlex. “Then there’s the vibrations and then we have 21 different effects across all of our equipment.”

The bells and whistles of a 4DX auditorium include wind machines, strobe lights, snow simulation (it’s foam), smoke scents and a device inside the seats that thrusts into the shoulders of audience members.

“I checked with our artists. They don’t call it a back puncher. They call it ‘the back kicker,’” Kim laughs.

With so many instruments inside each auditorium, it might be easy to simply crank everything up and put the room on full blast. But a 4DX experience isn’t a matter of sensory overload. Instead, each one is meticulously curated through a weeks-long process in Korea to align with and enhance the content on the big screen.

Each year, the group creates 4DX experiences for more than 30 American productions, along with 40 more titles from China, Korea and other local markets. Once a 4DX experience is finalized, the encoded instructions are wirelessly distributed to the company’s auditoriums around the world. They are then run off local servers within each location.

“There are two teams in Korea. Motion team takes the first stab. That takes about two weeks to finish. Then the effects team comes,” says Duncan MacDonald, head of worldwide marketing and theater development in the Americas at CJ 4DPLEX. “They work very closely with one another. This team has been doing it for so long and it’s really fascinating how they take a movie and they add the 4DX to it. It’s a very certain, specific talent.”

“I think a lot of people assume that this is done through an automated process. It’s not,” Kim adds. “They really sometimes go frame-by-frame to make sure that every effect, every motion, every vibration is correctly transmitted according to what you’re seeing on the screen.”

As MacDonald describes, “Bullet Train” is “a great fit” for 4DX. The film’s abundance of rock-em-sock-em fight scenes sends seats jolting back and forth. Heavy blows activate the “back kicker” in each seat. As bullets whizz by, gusts of air fire off near the side of attendees’ heads.

But the use of 4DX extends beyond underlining the violence in “Bullet Train.” Some comedic moments get unexpected emphasis, such as when the image of an erupting bidet triggers a spray of water from the nozzle in front of each seat. Additionally, the film’s setting calls for its own environmental flair, from the occasional blast of wind to a more consistent light seat rocking that aligns with the sway of train cars.

Some filmmakers have become more invested in how 4DX is implemented with their work. CJ Group is happy to invite them into the process. Earlier this year, “Top Gun: Maverick” director Joseph Kosinski, “Lightyear” director Angus MacLane and “Doctor Strange in the Multiverse of Madness” editor Bob Murawski visited the company’s Hollywood screening room, providing notes that were then sent back to teams in Korea to tweak the experience. The office even welcomes writer-director Kevin Smith, who will occasionally swing by the screening room to watch new releases.

“We work with filmmakers or studio representatives to make sure that the quality is there,” Kim shares. “We worked directly with director Joseph Kosinski on ‘Top Gun: Maverick.’ He was in our theaters, in our screening room, testing and making sure everything is to his vision on how the film should play.”

By inviting parties closer to the filmmaking process to collaborate, 4DX teams can better achieve the objective they set out for — immersion.

After new releases leave theaters, 4DX auditorium instructions remain archived within CJ Group, in case films are rereleased down the line. The company also continues to explore opportunities to implement 4DX with older movies; Joe Dante’s “Gremlins” was released in the format over the 2019 holiday season.

The first 4DX auditorium opened to the public in 2009, with a venue in Korea welcoming moviegoers to see James Cameron’s sci-fi epic “Avatar” in motion seats. In the years since, the entertainment branch of CJ Group has dramatically expanded the format’s global footprint, with 57 theaters in North America and 783 worldwide. The company has also focused on another premium format — ScreenX, a panoramic auditorium that projects images around audiences with 270-degree screens.

See also  The 25 greatest records of the year

While the COVID-19 pandemic proved to be a tumultuous period for the theatrical industry at large, CJ Group notes that studios and consumers have shown more intense interest in 4DX as lockdowns have lifted. “Top Gun: Maverick” surpassed $50 million in box office sales across 4DX and ScreenX auditoriums — the highest grossing release yet across the formats.

“People just wanted to come out and experience something different,” MacDonald says. “4DX is something you can’t get at home. It is so different than a regular moviegoing experience. I think people were searching that out after the pandemic. We get our exit polling after every big title and there’s a huge positive sentiment as far as it being a fully immersive experience. Nothing too much. Not too many back punches — just the right amount.”

As popular legend goes, the 1890s audience first viewing the Lumière brothers’ “The Arrival of a Train at La Ciotat” was so alarmed by the image of a locomotive barreling toward them that the room erupted in panic. Now, more than 125 years later, auditoriums are instead immersing viewers inside the on-screen train, as Brad Pitt sends it flying off the rails.

Ruben Randall - May 27, 2022 0
Money
Beverley's logic is simple. LeBron James and Luka Doncic have posted similar numbers, and they got paid. The same treatment should be given to...

Snoop Dogg, Eminem to enter the metaverse for VMAs performance