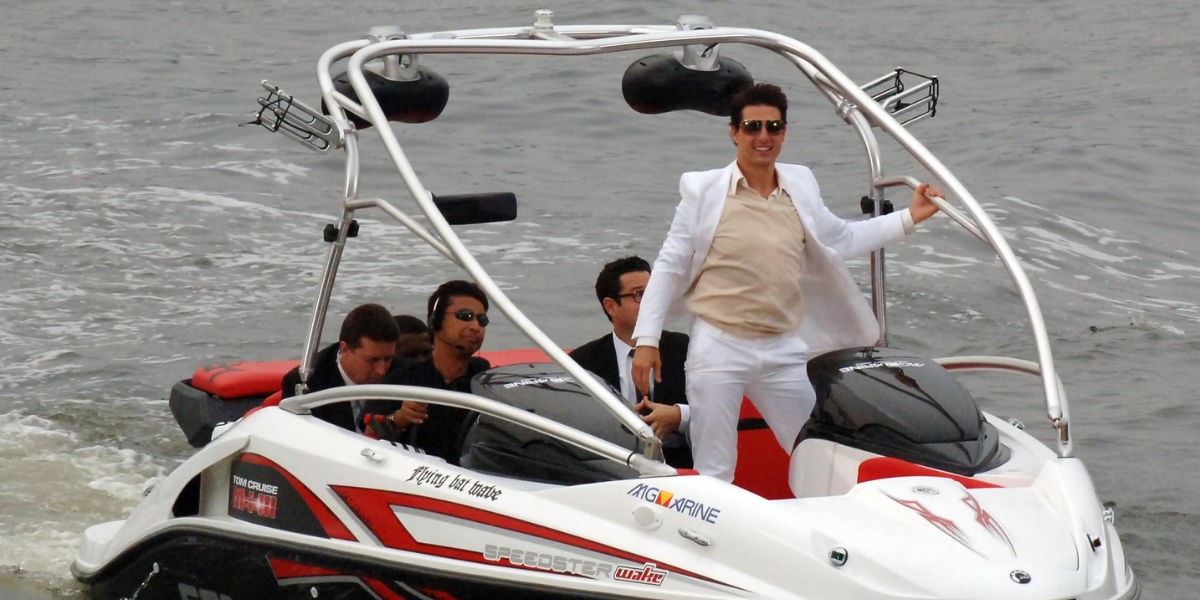 Tom Cruise is one of the most controversial actors in Hollywood. Because of his ties to Scientology and disastrous break-up with Katie Holmes, Cruise has a reputation for being a bit of an oddball, at best. As if his involvement in Scientology did not generate enough bad press, Cruise is also remembered for a humiliating interview on The Oprah Winfrey Show. Very embarrassing! However, at the same time, Cruise has amassed a dedicated fan base by starring in the Mission Impossible film series…and quite the fortune along with it.

Cruise’s fascinating combination of vast financial resources and an eccentric personality has left some fans to wonder how exactly the actor spends his money. Does he live the high life of fast cars and nights out on the town, like other Hollywood actors? Or does he cash out on items that are a bit more unexpected? Here’s what we know.

Updated on September 30, 2022: As of September 2022, Tom Cruise has a reported net worth of $600 million, earning around $50 million per year. He continues to spend a large percentage of his revenue on the Church of Scientology, and a lot of it also goes towards keeping up his millionaire lifestyle.

What’s The Cost Of His Faith?

Cruise definitely stands out from other big movie stars in the sense that he spends a sizeable amount of his earnings on his membership to the Church of Scientology. Business Insider estimates that Cruise has spent upwards of $25 million dollars on maintaining his role in the Church.

Related: 15 Actors Who Do Their Own Stunts (Besides Tom Cruise And Jackie Chan)

According to a separate report by the same outlet, it is typical for Scientologist worshipers to pay a high price for their attendance. Mandatory therapy sessions—known within the organization as “auditing”—can cost up to $800 per hour. Required courses are also very expensive, and reportedly cost upwards of $650 each.

However, church members are encouraged to donate funds to Scientology, beyond the minimum payments needed to remain involved in the religion. The Tampa Bay Times confirmed that multi-millionaire Bob Duggan donated $360 million to the church.

While Cruise has only contributed a percentage of what Duggan has given the organization over the years, it is clear that the actor has not been afraid to spend a large portion of his income on maintaining his membership to the Church of Scientology.

Related: 15 Things Katie Holmes Has Done Since Her Divorce From Tom Cruise

While Cruise’s financial relationship to Scientology makes him stand out from other actors, he does have one thing in common with other Hollywood stars: he likes living in a big house.

A special episode of The Altman Brothers gives fans an insiders’ view of life from within Cruise’s private compound in Los Angeles via an in-depth tour of the real estate. The brothers film the space and occasionally point out some unique aspects of the actor’s home. With extensive grounds and two separate houses, the property is completely over-the-top.

As the Altman brothers point out in the episode, each of the two homes on Cruise’s property has a unique vibe and a unique purpose. The first house is the larger of the two, and it is also what most people think of when they imagine a typical celebrity pad. With a huge martial arts gym and a balcony with an expansive view, the larger house seems to embody everything that is Hollywood living.

Related: 15 Facts About Nicole Kidman And Tom Cruise’s Marriage That Have Recently Surfaced

Cruise’s second home, on the other hand, is much more simple. With a fireplace and cozy living room area, the smaller of the two houses is intended as an escape from all the craziness of Los Angeles. As the Altman brothers point out, “this [residence] is just like It want to get away. I want to clear my head. I want to write a novel.’”

It sure seems like Cruise enjoyed jumping between two facets of life: the glitzier side of California glam and that special, homey feel that we so often experience in a more secluded space.

Boats, Boats, And Even More Boats

Even if Cruise’s Los Angeles estate shows that he makes classic Hollywood purchases, the actor continues to spend his money on totally outlandish ideas. What was his most recent splurge? Boats. The only catch is that the actor’s fleet has nothing to do with yachting or sport sailing.

According to Sky News, Cruise did not want to halt the filming of his most recent Mission Impossible movie. Because of COVID-19, however, the actor’s “let the show go on” attitude was just unrealistic…under most circumstances.

As the outlet reports, Cruise resolved to spend just under $650,000 to rent cruise ships to house members of film production. That’s a lot of cash!

So, does that mean that the newest Mission Impossible movie will come out in 2021 as originally scheduled? Perhaps not, but we are definitely excited to see what other huge purchases Cruise makes in order to try to make it happen.

Next: Idris Elba Became Stacker In ‘Pacific Rim’ Over Tom Cruise, Thanks To Scheduling Conflicts

Ruben Randall - May 20, 2022 0
Actress
The CW is taking on another western in Walker: Independence. A prequel to Jared Padalecki‘s Walker, this new series stars Katherine McNamara as...

How the Barbie Movie Could Set the Record Straight