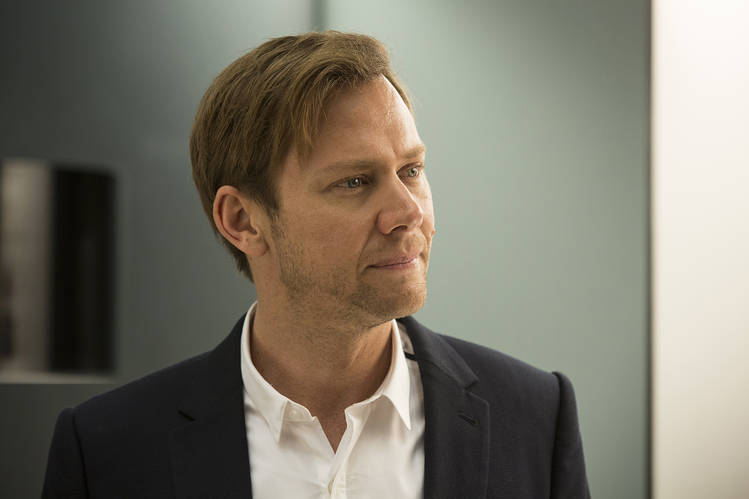 Warning: This article contains spoilers from “Westworld” through episode 3. Read at your own risk.

HBO‘s “Westworld” is full of familiar faces, from Anthony Hopkins to Thandie Newton to James Marsden. While he doesn’t have the name recognition of some of his fellow cast members, Jimmi Simpson is certainly someone viewers should recognize thanks to his prolific work in TV series such as “House of Cards” and “It’s Always Sunny in Philadelphia,” as well movies such as “Zodiac” and “White House Down.”

In “Westworld,” Simpson plays the pivotal role of William, an introverted guest at the top-dollar theme park dragged there by his randy, morally dubious colleague and brother-in-law Logan (Ben Barnes). William is reluctant to take in all of the robot-inhabited resort’s perks at first, but then a host named Dolores (Evan Rachel Wood) catches his eye and kickstarts his adventurous spirit.

Simpson talked to Speakeasy about how he would react to a place like Westworld, while weighing in on some of the biggest fan theories about the show — particularly one that suggests his story takes place in the past and that the friendly William will become the nefarious Man in Black (Ed Harris). Edited from an interview.

How did you capture William’s sense of intrigue and wonder?

That was my job. The things that helped me get there were, first of all, Jonah and Lisa casting me in this role. They understood I’m a hard worker. It’s not the kind of role I’m normally thought of for. I generally play crazy a–holes, and this was an opportunity to play a three-dimensional human man with feelings. And so it’s new for me and my craft. I don’t really have a trick to articulate that. So everything was absolute exploration for me. I don’t know how much [showrunners Jonathan Nolan and Lisa Joy] were aware that that would be my process, but it seems like they kind of knew what they were doing the whole way. That was my main goal, for William to be there, present, and have his eyes wide open, and to be observing. They wrote that into the narrative because he’s not there on his own volition. He’s brought there, unlike most guests there — they want to tear stuff up — and William is begrudgingly taken there almost as vetting from his co-worker and family member.

How would your response to that place be different from William’s? Would you want to go?

The star-bellied Sneetches resonated with me more than any other Dr. Seuss book as a child. Quite frankly, I have a hard time taking part in something that’s super exclusive, if most people aren’t allowed to do it for no good reason, like money or access. I probably wouldn’t … if I had the funds, I probably would not partake in it. If I were to go, if I were brought there, I would have a very similar response to William’s. Rather than letting me do what I want, I’d be interested in testing this fantasy, testing how deeply it went. For instance, on a lot of those “Grand Theft Auto” games, instead of just destroying things, I’ll try to find out how much stuff I can touch and manipulate, and how deeply they programmed this experience. … I’d be interested in checking out how real is the storefront. How real are the bathrooms in the restaurant, stuff like that.

That’s the ultimate catch for the place, though. Regardless of how intense the experiences are, there’s always going to be that feeling at the end of it, that none of this is real to begin with, even if I can touch it. Do you think William is more prone to being disillusioned like that?

That William is more prone to the fleeting nature of his experience?

I would say so. But I don’t think anyone, even the biggest gamer nerd, drops into the experience in a way where they can’t disassociate. … If you’re going to go in and take things apart, and destroy things, you’re getting that spike, that chemical high off of doing that. You’re getting the same kind of chemical high of dropping into the fantasy in a more passive way. I think everyone knows their experience is over when they stop playing.

Without spoiling anything, does William have a darker side? He doesn’t seem to, at least not yet. Do you think he’s capable of being evil or cruel?

I guess everyone’s a little capable of that. For William, I think it’s about exposing a guy who’s somewhat ill-content with his life, and because he’s always had to ask and work hard for everything he’s gotten, that when he gets something, he’s got to hold onto it. It’s good. His introduction to this lifeform that is Dolores seems to spark an interest in an actually brigher side to him.

“Westworld” is one of those shows that automatically prompts fans to start theorizing. Have you seen any of them yet?

I’m sure I’ve seen most of them. A lot of them remind me of the cast and I, when we were getting each script, because we would only get it script by script, sometimes scene by scene. And we would all have these conjectures and speculations as to what’s coming next. A lot of these ones were exactly the ones where we were like, wait, this happened and this happened, so it’s got to mean this. We were generally wrong. There’s a lot of those. Then there are other ones that are like, oh, they’re halfway there. They’re talking about this thing, and that’s kind of right, but this thing they’ve gotten wrong. I’m impressed at how creative people are because we were doing the same thing. I encourage people to keep on trying.

How do you feel about the one that says William is actually the Man in Black, that we’re seeing him in the past?

I love that one. I think that’s so flattering. (laughs)

It’s not every day you get compared to Ed Harris.

I know, dude, because he’s the friggin’ coolest character on the show.