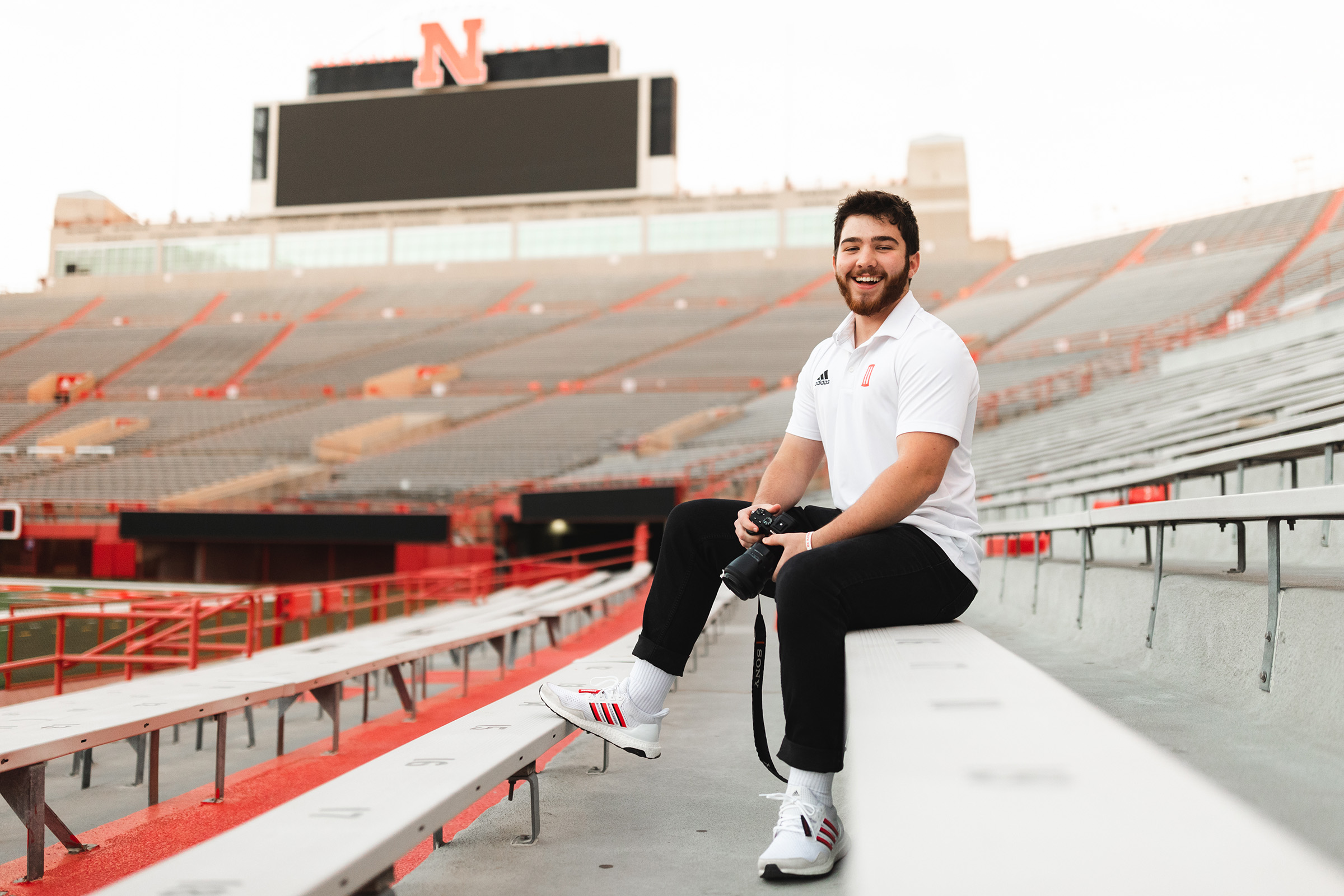 Ethan Weldon, an advertising and public relations major from McKinney, Texas, has immersed himself in hands-on opportunities while at Nebraska, from working in Husker Athletics’ creative media Corn Crib to seeking out internships to grow his skills. Over the course of a month, Weldon took one-second video snapshots of his days as a Husker, and answered some questions about his experiences.

Talk about why you applied to Nebraska. Was there a specific moment, or someone/something that pushed you to apply and enroll?

I remember sitting in my living room at home in Texas and seeing a hype video that Cam Taylor-Britt (former Nebraska cornerback) had posted recapping his best plays from the season, displayed in such a cinematic and captivating way that the videographers and editor had curated. In that moment after having rewatched it about a dozen times, I just thought to myself, “this is what I want to do.” And as I thought more about it, there wasn’t a better place to do it than Nebraska. The fanbase, the Athletic Department, the university, along with family ties I have to the state. It all made sense. I knew that this was a place where I could actualize the potential I knew I had.

Where does your passion for videography come from?

I wasn’t always into sports, as I never really understood the appeal throughout my teen years. I really liked watching movies, music videos and all kinds of TV shows in general, mostly because of the emotion they evoked in me. I actually began video editing for the first time by posting movie and music edits on Vine that seamlessly looped, hence my username, Loopz. So when I signed up for a video production class at my high school and got to learn from one of the greatest teachers I’ve known, Mrs. Steinhauser, I found that I had a real passion for visual storytelling and the freedom of creativity it allowed.

To be quite honest, I had never really fully applied myself to anything else in my early years of school before. I took every assignment as an opportunity to try something new, and to actually try. I really took pride in the projects I was making, even though they had no stakes attached to them. Once my teacher saw the passion and drive I had, and how well I connected with my classmates, she set me up to be a co-director for the next-level broadcast class that she also taught. That highlighted a big part of what makes me so passionate about what I do, being not just the things I’m making, but who I’m making them with. Being put in that position gave me the opportunity to understand the true importance of leadership and giving respect for others. Ever since then, I’ve been doing internships and working freelance gigs as much as I can.

How have hands-on opportunities like working for Husker Athletics shaped your college experience?

Hands-on opportunities like the one I have now with what we call the Corn Crib, the hub for Husker Athletics’ social media, have been the defining experiences of my time at Nebraska. The moments I’ve been able to capture, the places I’ve gotten to travel, and the content we’ve been able to produce has made it a truly invaluable experience. One of my favorite experiences was capturing JoJo Domann’s interception against Ohio State just a few feet away from me and hearing the stadium absolutely explode — or getting the opportunity to visit New York to see the NBA Players Association office with Nebraska Basketball.

Why was taking advantage of hands-on learning opportunities (including an internship with the College World Series) important for you and what have they taught you?

I’ve always seen myself as a go-getter and I feel like I put a lot of pressure on myself to seek out and succeed with opportunities like the College World Series, so they’re very important to me. Working the College World Series as a freelance contractor was very, very challenging, but it has given me so much more confidence in my skills and ability to work well with others. The most special moment that I took away was when I got to run on the field to film the celebrating Ole’ Miss players. Seeing their reactions to winning the championship and getting to capture that moment was something I will never forget.

Who or what inspires you?

I’m inspired by telling meaningful stories in hopes to evoke the same emotions in others that I feel when I watch great videos. A big person that inspires me is my dad. He has a work ethic like no one you’ve ever seen, and always makes it a point to treat people with respect and have fun while he’s doing it. Love him to death and am proud to be his son.

What’s something you love about being a Husker that can’t be captured on camera?

Something I love about being a Husker that can’t be caught on camera is the feeling that everyone around you cares. All the fans, the staff, the players. Everyone wants to see everyone succeed, and it’s just something you can feel.

Is there someone who has impacted your time at Nebraska?

There are countless people who have affected my time at Nebraska, but one person who plays a big role in keeping my head on my shoulders when things get crazy is my girlfriend, Bree. Bree lives back home in Texas where we met, but provides no shortage of support from over the phone. I can’t thank her enough for everything!

What is one piece of advice you would give to a Husker looking to gain hands-on experience in their major?

Someone coming into Nebraska hoping to get the most out of their advertising degree should use the resources available outside of their classes to gain experience. Classes are great and help get you prepared for the professional world, but the experiences you have outside of them are what help you find who you are. Nebraska is one of the best places in the country to make a name for yourself with what we do.

What do you hope to accomplish in your lifetime?

In my lifetime, I hope that I will have been able to have a positive impact on everyone around me, and accomplish many, many more unique things in my career. The biggest goal for me is to just enjoy it all, and make some really cool friends as I go.

Celebrity net worth: Celebrities who went from rags to riches including Cardi B, Eminem,...

Ruben Randall - January 10, 2023 0
Actor
Alison Brie and Dave Franco are the definition of a power couple. The two have been together since they first met in...