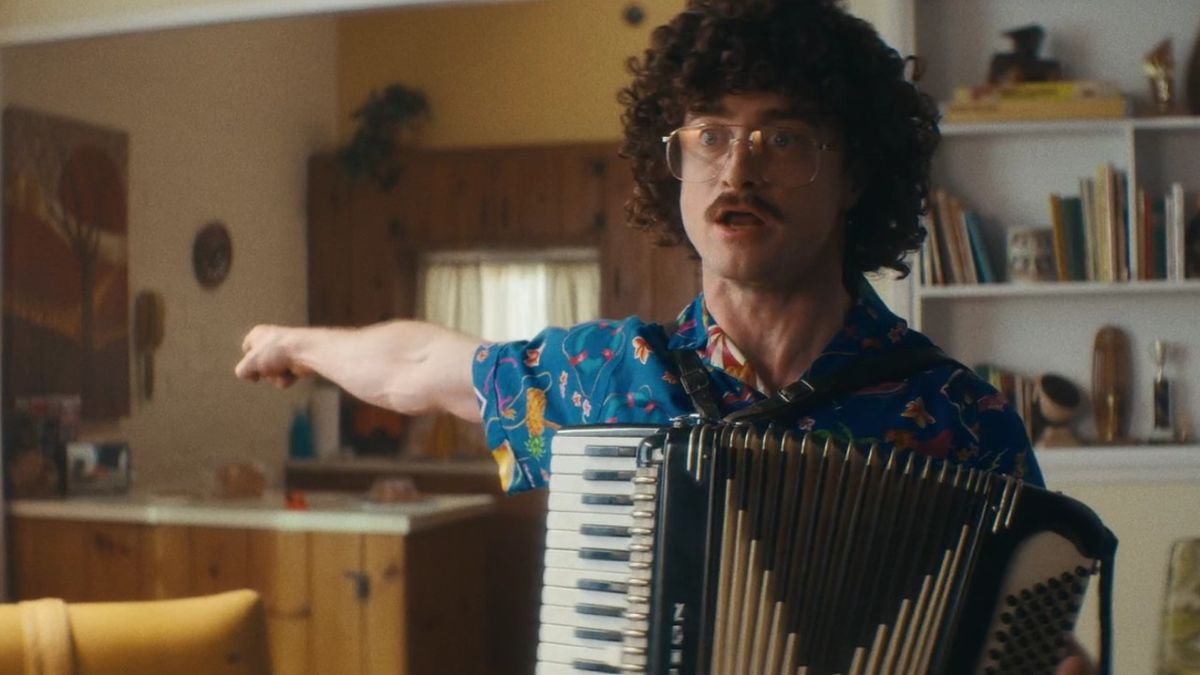 Weird: The Al Yankovic Story is a strange, confusing mess, and that’s what makes it so great. Instead of parodying songs, Weird Al decided to instead parody the entire music biopic genre. With a star-studded cast led by Daniel Radcliffe, this music biopic to end all music biopics is undoubtedly one of the most fun movies of the year.

I enjoyed nearly every moment of Weird Al’s feature-length parody, but here are the things I loved the most.

Daniel Radcliffe Is Funny And Sincere As Weird Al

It’s no secret Radcliffe has done his fair share of “weird” acting roles since the conclusion of Harry Potter. From playing a corpse in Swiss Army Man to a man with guns for hands in Guns Akimbo, Radcliffe has done a lot of films and shows that distinguish him from the Boy Who Lived.

The best part about Daniel Radcliffe’s performance in Weird is the sincerity with which he lip syncs to Weird Al’s music. Somehow it actually becomes believable that we’re looking at the real man, and not a five-foot-five British man in a curly wig. Radcliffe proves yet again in this movie that he’ll give his all to any role, no matter how strange his part may seem.

Instead Of A Parody Song, Weird Feels More Like A Parody Movie

If you’ve heard of “Amish Paradise,” “White and Nerdy,” or “Smells Like Nirvana,” then you know Yankovic’s shtick: he parodies well-known songs by changing the lyrics.

Yankovic applied this same formula to his “biopic” by fabricating an elaborate origin story, a meteoric rise to fame, and a tragic ending. In that sense, Weird is a parody of the entire music biopic genre.

Take a look at the scene where Al first finds the lyrics to “My Bologna,” or the scene where he and his friends record their first song in a public bathroom. The scenes are very reminiscent of scenes from Bohemian Rhapsody, the Oscar winning 2018 Queen biopic. How about the scene where the musician’s on-stage rant turns into a psychedelic counterculture experience? It’s a lot like what happened to Jim Morrison as we saw in The Doors.

Yankovic also seems to have parodied some “fake” biopics as well—it was hard to think of anything other than A Star Is Born when Radcliffe’s Yankovic pees himself onstage.

Weird begins with a little taste of Yankovic’s childhood, where we see his parents forbid him from listening to polka music and beg him to stop being who he is.

After convincing him to sneak out of his house, Al’s friends take him to a “polka party,” where all their classmates are dressed in lederhosen and polka music blasts from the record player. Unfortunately, the party gets busted by the cops, and poor teenage Al has to tell his parents about the debauchery he was wrapped up in.

The “Celebrity” Cameos Are Non-Stop

Throughout Weird, Yankovic finds inspiration for his parodies in some of the most literal ways. For example, this version of the singer/songwriter created “My Bologna” after making a sandwich with his roommate’s labeled deli meat; the inspiration for “Eat It” struck while eating cereal on an acid trip.

I think Yankovic was trying to imply in Weird that viewers don’t really buy it when biopics try to sell us unbelievable origin stories for artists’ songs. Regardless, these overly literal inspirations make for pretty funny scenes.

Evan Rachel Wood Does A Perfect Parody Of 1980s Madonna

The cherry on top of the ice cream sundae that is Weird is Evan Rachel Wood’s performance as Madonna.

In the movie, we learn about the “Yankovic bump,” which is a bump in sales artists would experience after Weird Al parodied one of their songs. Wood’s Madonna is extremely interested in the Yankovic bump, and seduces Al in an effort to boost her own popularity. She gets her “bump” when Al narrowly escapes death in the hospital and awakes ready to turn “Like a Virgin” into “Like a Surgeon.”

Although Yankovic and Madonna only met once in real life, Wood’s Madonna parody and this story perfectly fit into the Weird Al universe.

As Promised, It Gets Weird

One of Weird Al’s biggest fans in the biopic is Pablo Escobar, played by Broad City’s Arturo Castro. Long story short, Weird Al somehow ends up in a Rambo parody instead of a biopic parody.

After a full-blown shootout between Yankovic and Escobar’s men, Yankovic uses one of his platinum records as a throwing star and assassinates Pablo Escobar.

Honestly, I would have been more surprised if this movie didn’t include a twenty minute-long trek into the jungle.

Some Parts Of Weird Are Actually True

Okay, so Weird is not one hundred percent factual. But, according to Yankovic himself, some of the scenes in the movie contained grains of truth.

For example, Yankovic shared in a 2020 interview with The Washington Post that he really did get his first accordion from a traveling salesman as a present for his seventh birthday—although his father didn’t beat the salesman up, and his parents were actually very supportive of his aspirations.

And, Yankovic really did record “My Bologna” in a public restroom. The singer shared an image on Twitter in 2017 of the commemorative plaque his alma mater had, which was hung outside the bathroom where the magic happened.

Weird: The Weird Al Yankovic Story is available to stream on the Roku channel. You can also stream the movie for free on Roku.com (opens in new tab).

45 Yo Mama Jokes That Are Absolutely Savage (Yet So Funny!)

Ruben Randall - August 13, 2022 0
Actor
Patrick Schwarzenegger and his longtime girlfriend Abby Champion are spending some alone time together in New York City.And like most tourists, they headed...