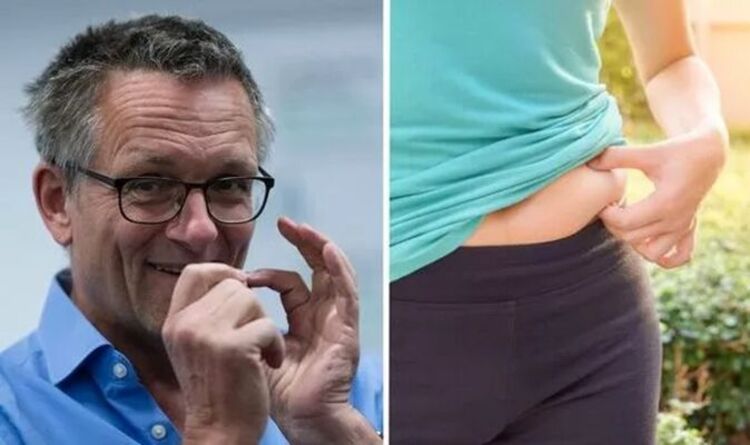 Dr Michael Mosley often shares his weight loss tips with slimmers online as well as on television. He is the creator of The Fast 800 – a diet plan that helps people lose weight quickly.

Even the thinnest people suffer with belly fat and to lose it, it is helpful to understand it, according to the nutrition expert.

He said: “You need to understand the basics of how insulin works. Your body makes insulin after a meal in order to keep blood sugar stable.

“On your cell walls, insulin opens up glucose ports to allow sugar through – for burning in muscle, and for storage in fat. In your fat, insulin also curbs the release of fatty acids into your system.

It is therefore helpful for both women and men over 50 to change their diet.

He said: “To make a serious impact on your belly fat, cutting out sugar-spikes is key. A surprising number of ‘diet’ snacks and drinks are high in sugar, and are marketed as diet foods because they happen to be low in fat.”

Dr Mosley said: “The idea that fasting ‘slows your metabolism’ is a myth. Under conditions of marked energy deficit – 800 calories per day or less – not only do you simply lose weight by eating fewer calories, but your body responds to the stress of fasting by enhancing hormone function to facilitate weight loss and burn fat for energy.

The nutrition expert this is supported by numerous studies, saying: “According to a 2014 review of the scientific literature, intermittent fasting can cause weight loss of three to eight percent over three to 24 weeks.

“Not only this – but people lost four to seven percent of their waist circumference as well – indicating a large loss of the harmful belly fat in the abdominal cavity, strongly linked to chronic disease.

“So, want to shift that weight round your middle? Try intermittent fasting.”

“Research has shown the extraordinary impact that ultra-short bursts of High Intensity Interval Training (HIIT) can have,” he said.

“All in just a few minutes. Not only is it effective, but study after study has shown it is much easier to stick to.”

Dr Mosley added: “So, conventional diet and training regimes don’t help you to lose belly fat. And let’s face it: surrounded by junk food, dosed with snacks, and working in sedentary jobs, we live in an environment that piles it on.

“And yet more and more people are discovering that with the right lifestyle changes, they can burn it off. And most amazing? It’s not as hard as you think.”

Afro Hair Representation On The Rise Across Hollywood

Ruben Randall - July 18, 2022 0
Actor
The bodybuilding legend, Arnold Schwarzenegger, is known to be a fearless guy, both on and off the movies. However, perhaps the same couldn’t...