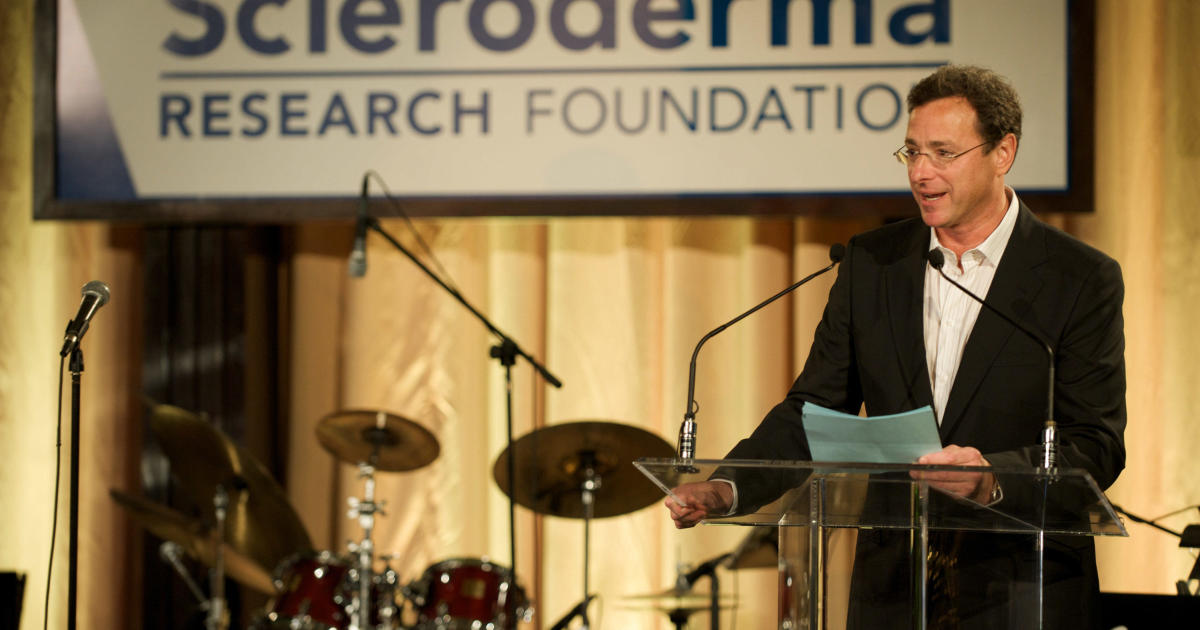 Behind his witty persona in front of the camera, actor and comedian Bob Saget was haunted for years by the death of his older sister. Just weeks before he died, Saget spent a day with CBS News chief medical correspondent Dr. Jon LaPook, speaking about his sister Gay in one of his final interviews.

Gay Saget died from scleroderma, an autoimmune disease where excess collagen causes tissue to lose its elasticity, in 1994. She was 47. The comedian and LaPook discussed the disease and how Saget used humor to cope with his loss.

“It was a three-to-four year process, and she was gone. And I couldn’t bear it,” Saget told LaPook in December. “I can’t get the images of the end of her life out of my head, ever.”

Symptoms of the disease include tightening of the skin, finger and toe pain, arthritis, muscle weakness and trouble swallowing. It can also damage internal organs, especially the lungs.

“She had a lot of fatigue. Her body, she said, it felt like her skin was on fire. She went to regular medical doctors that said that it could be lupus, it could be mental illness, it could be Epstein-Barr,” Saget said. “They named everything except what it was.”

In the United States, an estimated 300,000 people have scleroderma. About 80% are women, most commonly ages 30 to 50. For unclear reasons, the disease is often more severe in people of color.

“It can be a very terrible multi-system disease, but not in every patient,” said Dr. Fred Wigley, a professor of medicine at Johns Hopkins University who has studied scleroderma for 45 years.

See also  Inside Kris Jenner's $190million fortune – from $12.5million per KUWK season to a one-of-a-kind Rolls-Royce

Wigley said the drugs used to treat the disease work better “at the very early onset” than when the disease has already caused irreversible damage to a person’s tissues or skin. But lack of awareness in both patients and clinicians often causes a delay in diagnosis.

“I could hardly lift my legs. They were heavy as I was going up the steps. My fingers were cold. My face started to swell up,” Adams-Williams said. “I couldn’t hold the small dental instruments to do root canals and my hands were swollen. They were inflamed. I couldn’t bend them at all.”

Her symptoms completely resolved after she started taking medication to suppress her immune system.

But when Gay Saget was diagnosed, much less was known about the disease and how to treat it.

“We were all in the room when she let out her last breath,” Saget said. “And it, I don’t know how to explain it, but it felt like, I mean, I’m going to go all ‘woo woo’ here, but it felt like the soul going past us, literally felt it. I felt my hair kind of move. You know, and being an actor, that’s a very important thing if your hair gets out of place.”

Even as he talked about the death of his sister, humor came in.

“Humor is the only way my family survived,” he said. “It’s so healthy to laugh, and I’m out there doing it and I know it’s healing for people.”

Through laughter and star power, Saget raised more than $26 million for the Scleroderma Research Foundation. John Stamos, George Lopez, Ray Romano, Dave Chappelle, John Mayer and Robin Williams were among the friends who helped him.

“Robin Williams did the events seven times, he just, any time I asked him, he said, ‘OK, chief, whatever you need,'” he said.

Saget said he couldn’t sit and watch what happened to his sister, happen to more people.

He said he made it his mission to raise awareness of scleroderma in honor of his sister.

“For me, it’s an homage to her. And somehow telling her that her life had a real purpose,” Saget said. “I have a lot to live up to. I feel like, to really do her justice, is to really make huge strides in the next decade or two and to really help these sweet, innocent victims with this disease.”

With Saget’s sudden death, his words foreshadow a legacy beyond laughter.

“My sister should not be dead,” he said. “And that’s one of the things that’s kept me doing this, will keep me doing this until I’m gone. I’ll do it when I am gone.”

For more information about scleroderma, visit the Scleroderma Research Foundation.