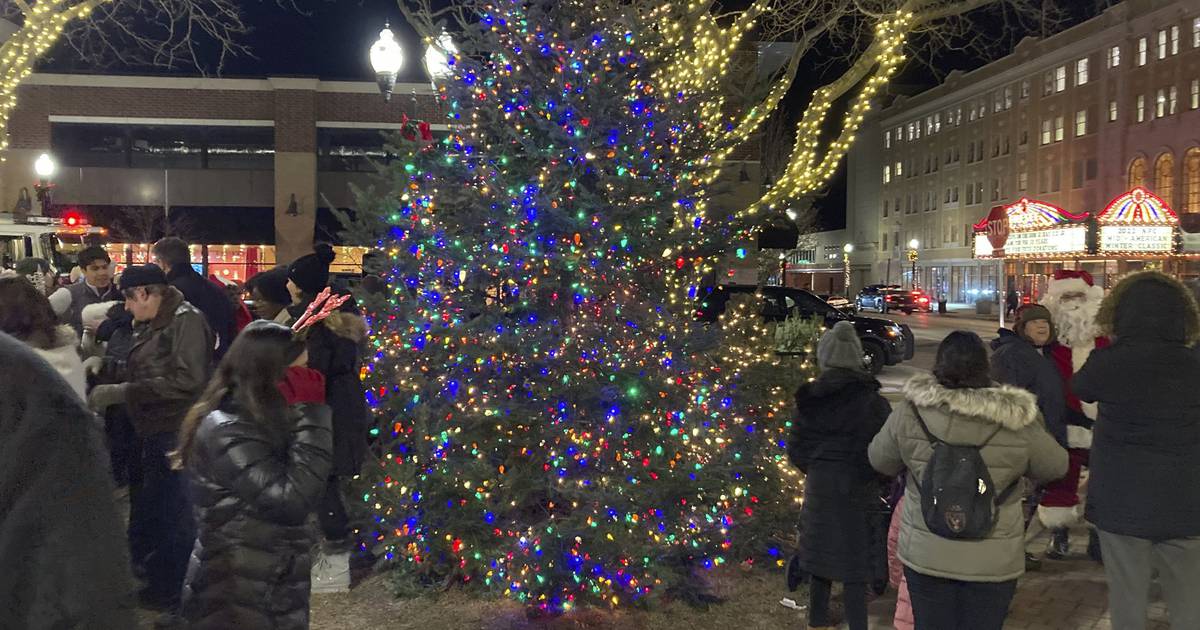 Before Waukegan Mayor Ann Taylor asked people to join her in saying “light the tree” as the city illuminated its official Christmas tree, the crowd of approximately 325 people was chanting “one more song, one more song” from the Cooke Choir.

After the ensemble of fourth and fifth graders from Cooke Magnet Elementary School in Waukegan sang “Jingle Bells,” “Rudolph the Red Nosed Reindeer” and “Feliz Navidad,” the crowd asked for more and the singers obliged as many in the crowd clapped and swayed.

Entertainment from youngsters, messages from community leaders and the arrival of Santa Claus were all part of the annual Christmas tree lighting Saturday afternoon in at Jack Benny Plaza in downtown Waukegan, officially starting the community’s holiday season.

“The holiday spirit is my favorite thing about this time of the year,” Taylor said, as she was getting ready for the official festivities. “It’s an important time for families to be together and celebrate.”

Omar Drobi, a Cooke fourth grader, and his friend, Sebastian Lopez, a Little Fort Elementary School fourth grade student who was also singing, said they felt glad and honored to be asked for another song.

“It was fun,” Omar said. “You could tell they really enjoyed it when they asked for another song.”

“I really liked it because of the joy of all the people,” Sebastian added.

Robin Clevenger, the music teacher at Cooke, said she was pleased when the crowd asked for the encore. Though unanticipated, she was prepared to lead the students for the additional song. They rehearsed for weeks at school.

“That was great,” Clevenger said of the request for more. “It was really special for them. It was great for them to have a chance to perform for everyone.”

While the choir was singing, people in the crowd like state Sen. Adriane Johnson, D-Buffalo Grove, and U.S. Rep. Brad Schneider, D-Highland Park, were clapping and swaying with the songs from the youngsters.

“Their energy was bringing everyone together,” Johnson said. “It’s a time of hope and all this energy is about hope. This is the magic of the holidays. This is why I really enjoyed the music.”

Some Waukegan residents, like Maggie Petre, came to the tree lighting for the first time. She was there with her husband and 3-year-old daughter. She said it is important to expose the child to the joys of Christmas.

“We want her to experience and enjoy everything about Christmas,” Petre said. “This will be a good experience for her,” she added, as her daughter sat on her father’s shoulders eating a candy cane she received from Santa Claus.

Others like Donovan Robin and his daughter Clara arrived early to participate in the GO Waukegan Winter Wonder Walk through downtown before the tree lighting. It was sponsored by the Waukegan Park District and the Lake County health department.

“I like to get out and walk in the sun, and then watch the tree lighting,” Donavan Robin said referring to the chilly weather.

Santa Claus, who arrived aboard a Waukegan Fire Department truck, may have provided the most important news of the day for youngsters. He did not speak publicly. When asked what children needed to do to be on his nice rather than naughty list, he said he would bring them all gifts.

“Everyone has done something nice during the year,” Santa said.

See also  Mother of Two, Arnold Schwarzenegger’s Daughter Katherine Is Open to the “Idea of Having a Lot of Kids Around”

House of the Dragon’s Emily Carey explains how Olivia Cooke and...

Ruben Randall - September 1, 2022 0
Actress
House of the Dragon, the much-anticipated prequel to Game of Thrones released recently and the series will chronicle the history of House...

Rebecca Ferguson Talks Of The Fight Scenes in ‘Dune’ Before The...