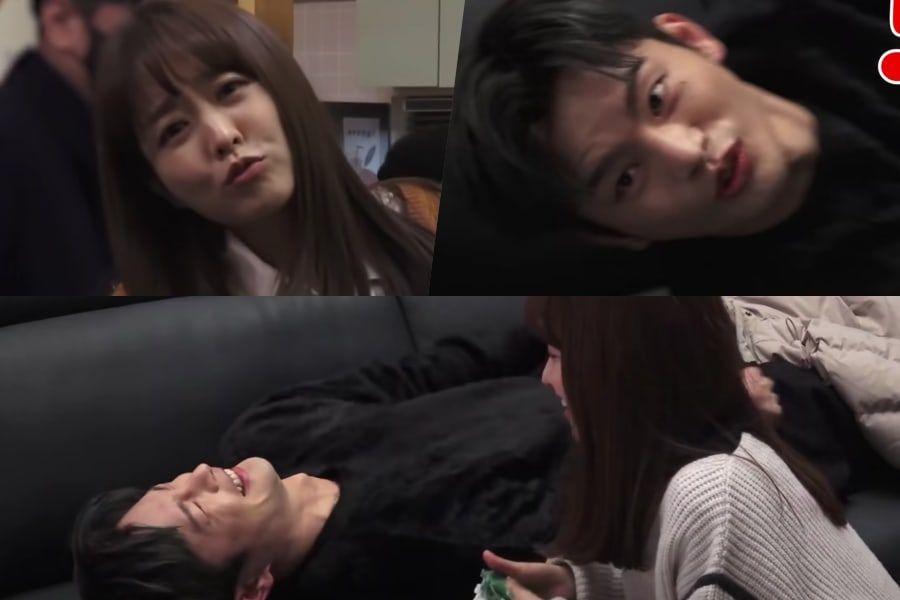 The cast of “Doom at Your Service” continue to show off their close chemistry in new behind-the-scenes clips!

“Doom at Your Service” is a fantasy romance drama about a supernatural being named Myul Mang (Seo In Guk), who causes everything he touches to vanish, and a woman named Tak Dong Kyung (Park Bo Young), who puts her life on the line to avoid her fate. When Tak Dong Kyung finds out that she has only 100 days left to live, she angrily calls for the world to be ruined—which unexpectedly brings to her doorstep the supernatural being Myul Mang, whose name is the literal Korean word for “ruin” or “destruction.”

On May 19, tvN uploaded a making-of video for episodes 3 and 4. The first scene is with Park Bo Young, Seo In Guk, and SF9’s Dawon, who plays Tak Dong Kyung’s younger brother Tak Sun Kyung. They are both shocked to discover Myul Mang lying in Tak Dong Kyung’s bed, and Myul Mang responds brightly to their surprise with aegyo (cute expressions). Once they’re done shooting, Seo In Guk embarrassedly comments, “Please edit it out. Keep it for yourself.”

Ahead of a romantic close-contact scene with Park Bo Young, Seo In Guk explains that everyone has weaknesses, and his is getting cold easily. He hilariously earns a light tap on the forehead from Park Bo Young after forgetting his lines, and when the director proudly yells “Cut!” he shyly asks, “Did my legs come out?” revealing that he had his knees up the whole time.

The pair then films on a rooftop, and Seo In Guk is shocked at the height of the building. The director instructs them to look at each other rather than look down and explains that the scene would be better if Myul Mang could confidently straighten his knees.

Knowing he’s afraid of heights, Park Bo Young tries to let Seo In Guk down first, but he insists she go first. She tries walking away, but he quickly makes sure she helps him down too. Seo In Guk explains, “I also hate that my eyes naturally gravitate towards the ground without me noticing.”

Park Bo Young is filming with Lee Soo Hyuk when the director suggests how aggressively he should approach the scene. Park Bo Young then chimes in to say, “Even if [Lee Soo Hyuk] were to do that, he’d probably still be really handsome.”

To prove to Tak Dong Kyung that Myul Mang cannot die, Seo In Guk prepares a gun for his next scene. As soon as it’s handed to him, he immediately turns into a scaredy cat, making sure it’s not loaded while all the staff members call out, “It’s not going to fire.”

They quickly rehearse for the scene where Tak Dong Kyung gets stabbed after blocking Myul Mang’s body, and Park Bo Young comments while hiding in Seo In Guk’s shirt, “I’ll just have to stay like this because I’m scared. Yes!” After monitoring the scene, Park Bo Young remarks about herself, “What is she trying to accomplish with that tiny body? But the timing was good.”

Start watching the drama below!

The iconic Raffles Grand Hotel d’Angkor reopens to the world