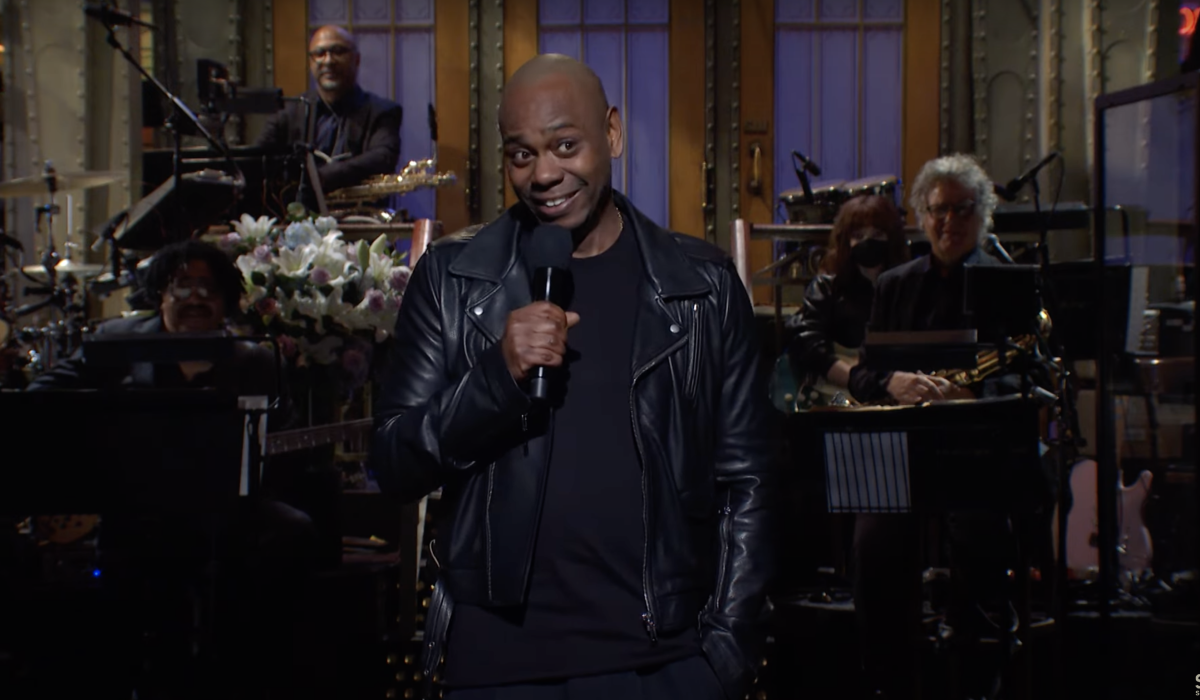 Dave Chappelle’s third opening monologue on Saturday Night Live opened with a disclaimer denouncing antisemitism. “And that, Kanye, is how you buy yourself some time.”

Chappelle began his 15-minute stand-up on Kanye West’s disastrous few weeks, during which anti-semitic comments caused him to lose, among other things, more than a billion dollars in a single day.

“I gotta tell you guys, I’ve probably been doing this for 35 years now and early in my career, I learned that there are two words in the English language that you should never say together in sequence and those words are ‘The’ and ‘Jews.’”

“Kanye’s gotten into some scrapes before and normally when he’s in trouble, I pull up immediately,” Chappelle continued. “This time I was like, you know what? Let me see what’s gonna happen first.”

The audience laughed as Chappelle traced the events back to the strange tweet that appeared to start it all. “It was like, “I’m feeling a little sleepy, I’m gonna get some rest, but when I wake up, I’m gonna go DEFCON 3 on the Jews!’ And then he just went to bed,” Chappelle said, eventually segueing into another antisemitic controversy:  “Kanye got in so much trouble, Kyrie got in trouble.”

The Brooklyn Nets star was recently suspended for at least five games after sharing a link to the antisemitic documentary film Hebrews to Negroes: Wake Up Black America. Chappelle didn’t condone it, but argued that the backlash went too far. “He was slow to apologize and the demands to get back in their good graces got longer and longer, and this is where I draw the line: I know the Jewish people have been through terrible things all over the world, but you can’t blame that on Black Americans. You just can’t.” He added, “Kyrie Irving’s Black ass was nowhere near the Holocaust. In fact, he’s not even certain it existed.”

He went on to discuss the midterm elections and the fate of the Trump era. This portion was more in line with his last two SNL monologues, both of which came after the last two presidential elections, Trump’s in 2016, and Biden’s in 2020. He called Herschel Walker “observably stupid.” And argued that the Democrats are “sore losers.”

Chappelle explained how living in Ohio, among the “poor whites,” gives him insight into Trump’s popularity that people in New York don’t understand. “He’s very loved. And the reason he’s loved is because people in Ohio have never seen somebody like him.”

Before I start tonight, I just wanted to read a brief statement that I prepared. I denounce anti-semitism in all its forms and I stand with my friends in the Jewish community. And that, Kanye, is how you buy yourself some time.

I gotta tell you guys, I’ve probably been doing this for 35 years now and early my career, I learned that there are two words in the English language that you should never say together in sequence and those words are “The” and “Jews.” Never heard someone do good after they say that.

Kanye’s gotten into some scrapes before and normally when he’s in trouble, I pull up immediately. This time I was like you know what? Let me see what’s gonna happen first.

Can’t even remember how it started. I vaguely remember it started with a tweet — a strange tweet. It was like, “I’m feeling a little sleepy, I’m gonna get me some rest, but when I wake up, I’m gonna go DEFCON 3! On the Jews!’ And then he just went to bed. I was up all night worried. What is he going to do to the Jews?

I grew up around Jewish people. I have a lot of Jewish friends so I’m not freaked out by your culture. I know a little bit about it just from hanging around like, yeah let’s get out after school tomorrow and it’s like we can’t go out it’s sha na na tomorrow. Like, what? What is sha na na? I had so many questions, like why do some of your people dress like Run-DMC?

[Unintelligible] A year ago, I’d seen [Kanye West] on a podcast called Drink Champs, great show. And it was an amazing appearance. Rappers that I love, and they all had their gold chains and stuff on and Kanye said “only millionaires wear chains.” They said, “what?” He said, “I’m a billionaire. Billionaires don’t wear their money on their body.” I took my chain and I said “oh, snap!”

It was a good appearance. It was fun and funny. When we woke up we went on Drink Champs again and this time he was all mad about something. He said “I can say anti-semitic things. And Adidas can’t drop me.” Adidas dropped that [expletive] immediately.  Ironically, Adidas was founded by Nazis and they were offended. The student has surpassed the teacher.

It was a big deal. He broke the show business rules. You know, because it’s a rule, the rule of perception. If they’re Black, then it’s a gang, if they’re Italians a mob, but if they’re Jewish, it’s a coincidence and you should never speak about it.

Kanye got in so much trouble Kyrie got in trouble. Kyrie Irving posted a link to a movie that he had seen on Amazon, no caption on the post or nothing like that. But apparently this movie had some, I don’t know anti-semitic tropes or something, and it was a weird title like ‘From He-Bro to Negro” or something … He was slow to apologize and then the list of demands to get back in their good graces got longer and longer and this, this is where, you know, I draw the line I know that Jewish people have been through terrible things all over the world but you can’t blame that on Black Americans, you just can’t. [Unintelligible]. Because Kyrie Irving’s Black ass was nowhere near the Holocaust. In fact he’s not even certain it existed.

I saw one news pundit screaming about Kanye and she said, “Mental health is no excuse for that type of language.” Yes, it is, bitch … Listen, okay, I don’t think Kanye is crazy at all. I think he’s possibly not well.

In Hollywood — don’t want ya’ll to get mad at me. I’m just telling you this is just what I saw. It’s a lot of Jews. Like, a lot. But that doesn’t mean anything. There’s a lot of Black people in Ferguson, Missouri … I can see if you had some kind of issue, I mean, you might go out to Hollywood and you might start connecting some kind of lines and maybe adopt the delusion that the Jews run showbusiness. It’s not a crazy thing to think.

But it’s a crazy thing to say out loud [unintelligible.] Now, the midterms are over and it’s a crazy climate. And I gotta tell you, I feel like this midterm is like all of humanity depends on it. And it’s an ominous sign. But the most ominous sign of the midterms I believe to be Herschel Walker who I don’t want to speak badly of because he’s Black. But I have to admit he’s observably stupid. Even when he’s not talking, his mouth be open like [mimes]. Looks like he thinks before he makes a move on tic-tac-toe.

And watching the news now, they’re declaring the end of the Trump era. And now, okay, I could see how in New York, you might believe this is the end of his era. I’m just being honest with you. I live in Ohio amongst the poor whites. A lot of you don’t understand why Trump was so popular, but I get it, because I hear it every day.

He’s very loved. And the reason he’s lived is because people in Ohio have never seen somebody like him. He’s what I call an honest liar. I’m not joking right now. He’s an honest liar.  That first debate. That first debate. I’ve never seen anything like it. I’ve never seen a white male billionaire screaming at the top of his lungs. “This whole system is rigged.” He said and across the stage was white woman Hillary Clinton and Barack Obama sitting over there looking at him like, ‘No it’s no.” I said, wait a minute, bro. It’s what he [Trump] said…

Trump said, “I know the system is rigged, because I use it,” I said God damn. And then he pulled out an Illuminati membership card and did a line of cocaine … Nobody had ever heard someone say something that true. And then Hillary Clinton tried to punch him with the taxes. “This man doesn’t pay his taxes.” And he shot right back, “That makes me smart.”

And then he said, “If you want me to pay my taxes then change the tax code, but I know you won’t, because your friends and your donors enjoy the same tax breaks that I do.” And with that, my friends, a star was born.

Why were all the documents in his house? What was this? This guy that’s famous for not reading his press briefings now is saying he’s got 10,000 briefings … [Unintelligible.]

I’ve been fired from jobs many times in my life and I will be very honest with you. Sometimes when I was fired, I stole things from the office. Staplers, computer mouse, all kinds of stuff. But you know what I never stole from work? Work.

The war in Ukraine brought it all into focus and lucky for everybody in the western world, the Ukrainians are way better fighters than we thought they’d been. I mean, these guys. They killed 10,000 Russians the first week of the war. Even the Vietnamese were like, “God damn.” This was before they had weapons. This was before we were sending them weapons, they was killing Russians with things you can find around  the house. That whole country, Ukraine, is littered with traps like Home Alone. They was stepping on rakes and [unintelligible.]

How was Russia losing to Ukraine? That would be like America losing a war to Colorado.

Nobody listens to me when I tell these jokes. You ignore me. My first Netflix special. What did I say? I said I don’t want to sneak a deal because the minute I say something that makes those people mad, they’re gonna take my sneakers away. And the whole crowd was like, “ha, ha, ha, ha, ha.”

It shouldn’t be this scary to talk. About anything. It’s made my job incredibly difficult, and to be honest with you, I’m getting incredibly sick of talking to a crowd like this. I love you to death. And I thank you for your support. And I hope they don’t take anything away from me. Whoever they are.

We’ve got a great show tonight. Brooklyn’s finest Black Star is in the building.”

Ruben Randall - May 24, 2022 0
Celebrity
If the 2020s are shaping up to be about any one thing, it's ultimately about how this was the decade in which millions...