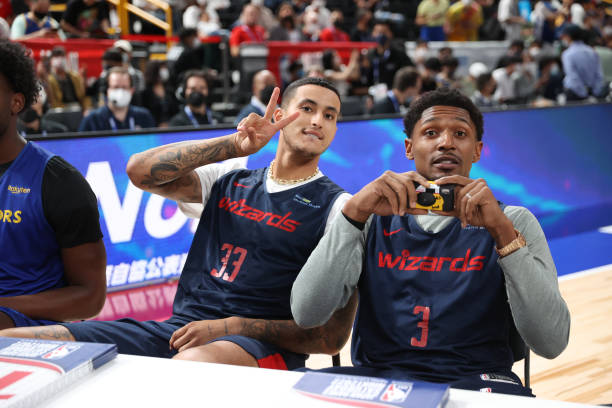 The Washington Wizards have struggled throughout the past 5 seasons, earning at best the 8th seed in the Eastern Conference. After firing Ernie Grunfeld in 2019, things were looking up for the franchise, however, since then, their biggest achievement was making the play-in with Russell Westbrook. Once coach Scott Brooks was fired, and coach Wes Unseld Jr. took over, Wizard’s fans once again believed it might be the start of the rise of the franchise. However, once Bradley Beal, the team’s shooting guard superstar, had season-ending surgery done on his left wrist, Wizards fans would have to wait until this season to see what this new coach could really bring to the table. Now with new recruits, offseason action, and supermax deals, Wizards fans are in for a roller coaster that shouldn’t be as bumpy as previous years.

This Wizards team, coming into the 2022-23 season, looks completely different from what it was only two seasons ago. The Wizards in 2021, traded Westbrook and a second-round 2024 pick for Kyle Kuzma, Kentavious Caldwell-Pope, and Montrezl Harrel. Only one of those three players remains on the current team. In last year’s season, the Wizards acquired big man Kristaps Porzingis in exchange for Davis Bertans and Spencer Dinwiddie. Despite not having Beal by his side, Porzingis still contributed a solid 22 points per game in the 17 games he played for the Wizards.

The Wizards had a pretty busy offseason, to say the least. To start off, on June 23, 2022, the Wizards selected Wisconsin Guard Johnny Davis as the 10th overall pick in the NBA draft. Davis averaged nearly 20 points in his sophomore year at Wisconsin, which is not an easy thing to accomplish.

He will add depth to the Wizard’s roster, while at the same time contributing to the team with his skills and abilities to play the guard position. Davis is specifically an exciting player to look out for due to the fact that he will be playing under Bradley Beal. Beal will likely take him under his wing and not only will Davis be able to play and develop when Beal sits, but he will also be able to learn from one of the top players in the league, making him an extremely exciting rookie to keep an eye on.

Next during the offseason, the Wizards made a very significant trade with the Denver Nuggets. The Wizards acquired guard Will Barton and point guard Monte Morris in exchange for Caldwell-Pope and Ish Smith. Although this trade did not turn many heads in the NBA, this was a very big trade for the Wizards. Before this trade, the team was in desperate need for a point guard. After Jamal Murray of the Denver Nuggets got injured, Morris stepped up to the point guard role and showed up big time. It seems as though the Wizards’ front office took notice, and now Morris is expected to be the starting point guard for the team this year.

Now for the big one. This offseason was huge for one player in particular. The star of the team. Bradley Beal. Rumors all over the NBA have been speculating for years about Beal. Some said he’d go to Miami, others said he’d go to Golden State. However, all the gossip and rumors had one thing in common. Everyone thought he needed to get out of Washington. Then during this offseason, Beal declined a 36-million-dollar player option.

See also  Mainstreaming Extremism: The Legacy of Far-Right Violence from the Past to the Present

After this, most fans and analysts thought that was it, and Beal was finally about to leave the team that he had been drafted to in 2012. However, one day later, Beal got the max contract- 5 years, $251 Million. Beal had always shown his devotion and loyalty to the team. However, this was on another level. With everyone, absolutely everyone telling him he needed to get out of there, Beal followed his heart and stayed loyal to the city that took care of him for over a decade, and the city he loves so much.

The new best duo in the league

Two players. Bradley Emmanuel Beal Sr. and Kristaps Talisovich Porzingis. These two, with a solid surrounding cast in Kuzma, Rui Hachimura, Morris, and many more, will be a scary sight to see in the league. With a heavily contended Eastern Conference this season, the Wizards will need to bring out their A-game every night, however with these two, I fail to see a reason why they shouldn’t make at least the play-in. With both of these players healthy, Porzingis will be throwing lobs to Beal left and right. We saw the same thing with Beal and Thomas Bryant a few years back. Now with another star by his side, Beal, Porzingis, and the Wizards team as a whole are sure to at least bring hope or even good results to the Washington fans who have deserved it for a long time.

Box-Office Flops That Ended Up Being Cult Classics