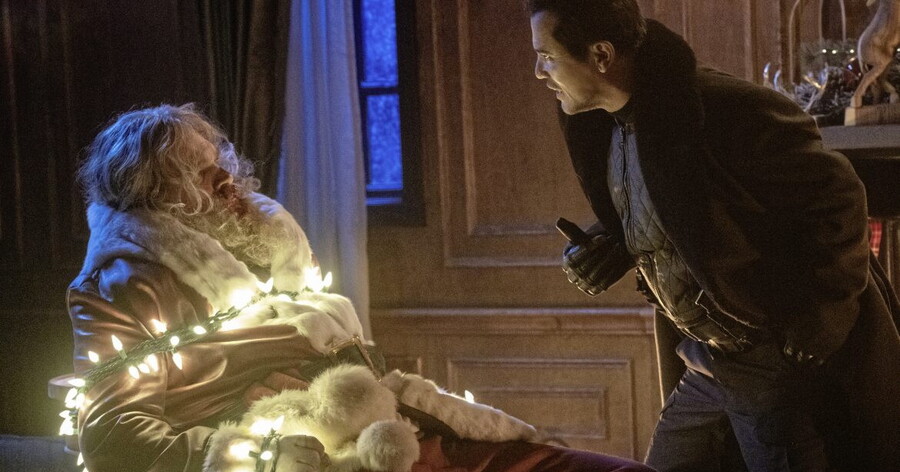 ACCORDING to the lyrics of Santa Claus Is Comin’ To Town, “He knows if you’ve been bad or good/So be good for goodness sake”.

The ample-bellied man in the red suit is drunk and disorderly in charge of reindeer, unapologetically profane and deeply disrespectful of homeowners and their property (especially liquor cabinets).

He is also the hammer-wielding hero of Violent Night, the illegitimate love child of Bad Santa and Die Hard, which compels a hungover and disillusioned Saint Nick to dole out season’s beatings when he should be delivering presents to sweetly slumbering children.

The naughty list is extensive in Wirkola’s gratuitously gory picture, which boasts John Wick director David Leitch as a producer.

His influence is pronounced in two, stunt-heavy fight sequences: a young girl replicating Home Alone-style booby traps to fend off thugs and a showdown between Santa and gun-toting assailants, which choreographs jaw-dropping carnage while Bryan Adams croons “Christmas Time”.

Screenwriters Pat Casey and Josh Miller, who turbo-charged the recent Sonic The Hedgehog films, pay tongue-in-cheek homage to seasonal favourites including Miracle On 34th Street for a subversive Christmas caper that salves a deeply sadistic streak (a wooden nutcracker is abused as an instrument of torture) with heart-warming sentimentality.

It’s a potent and heady brew like homemade egg nog with overly generous sloshes of bourbon, rum and brandy.

Santa Claus (David Harbour) enjoys a couple of beers at a pub in Bristol on Christmas Eve before he takes flight in his reindeer-pulled sleigh.

The intruders are targeting 300 million US dollars in the Lightstone family vault.

“When he was small, I begged you to beat him,” despairs grandmother Gertrude.

Santa discovers innocent believer Trudy is in peril and he reluctantly takes matters into his white-gloved hands.

Harbour embraces his character’s Viking past to perform physically demanding brawls without losing sight of the touching emotional connection to Brady’s moppet.

On-screen bloodletting is copious including a close encounter with a wood chipper but the tone is stylised and predominantly comical.