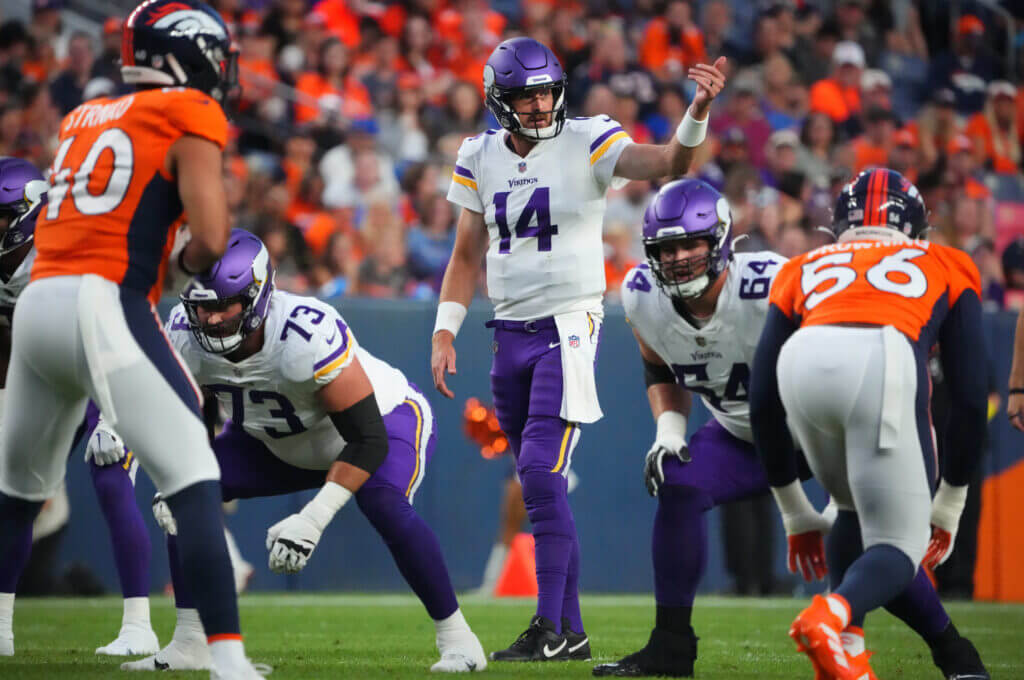 The Minnesota Vikings’ 23-13 loss Saturday to the Denver Broncos saw the team finish 0-3 in the preseason — just like the 2021 Rams did before they embarked on a Super Bowl run.

A winless preseason is no guarantee of poor regular-season results, but it also doesn’t tell us if a team is any good. The Vikings’ preseason matchups may have been difficult to watch, but they have influenced who will make the 53-man roster.

Using player performance and usage in those games, it’s time to project the Vikings roster — a much more meaningful exercise than caring about the results of the games.

The trade for Nick Mullens doesn’t ensure that he’ll make the roster; the Vikings pay nothing if Mullens isn’t active. But they wouldn’t have made such an attention-grabbing move if they didn’t see Mullens as an upgrade over the other backups on the roster. That rings even more true now knowing that Mullens wasn’t in the plan to play Saturday — they didn’t feel the need to try him out. Kellen Mond and Sean Mannion have gone back and forth throughout training camp and the preseason, and that should be enough to break the tie in favor of the younger player. It helps that Mond flashed more in the final preseason game, but ultimately the preseason likely points to Mond becoming the third quarterback, either on the roster outright or the practice squad. I have him making the roster because it seems unlikely he’d survive waivers and make it to the practice squad.

“We’ll continue to kind of talk through how that depth chart is going to look behind Kirk.” – Kevin O’Connell on the #Vikings backup QB battle pic.twitter.com/imXI8VPdJ4

The Vikings have a deep and diverse running back group but will still be led by a primary back, Dalvin Cook. The challenge for the Vikings here might not be about which backs to keep on the roster — they seem committed to a five-running back setup that’s fairly rare across the league — but instead how to use some of their more exciting players. Kene Nwangwu and Ty Chandler impressed in the preseason, and we’ve seen the Vikings use Nwangwu with the first team from time to time.

See also  Who are the Joneses in the Toyota commercial?

Players can now return from injured reserve after four games, and that’s the projection right now for Bisi Johnson, who injured his knee against the Broncos. After the game, head coach Kevin O’Connell said that Johnson would have solidly made the team had it not been for his injury. Outside of that, wide receiver is one of the deeper positions on the team. Not only is their starting three one of the best in the NFL, but the development they’ve seen in camp from Ihmir Smith-Marsette and the return of Johnson have set them up to have a great five-man rotation. Trishton Jackson makes the roster here because of his heavy special teams usage but may lose his spot once Johnson returns. Smith-Marsette has been up-and-down in the punt return role, but the potential for big plays is tantalizing, and his team-leading 121 receiving yards in the preseason speaks well to his ability to contribute on offense, too.

The Vikings have been intent on finding a way to keep Zach Davidson and used him on several special teams units in the three preseason games. While his performance there hasn’t been stellar, it hasn’t been a significant liability either. His upside is tremendous, and we have seen flashes of it on occasion. Still, he’ll be behind blocking tight end Ben Ellefson and do-everything player Johnny Mundt while Irv Smith takes on most of the load at tight end as the starter.

With Jesse Davis and Blake Brandel, the Vikings have some flexible tackle depth while also rostering three players who can play on the inside. In an emergency, they might also be able to flip Cleveland outside like he did in college. The Vikings acknowledged that Ed Ingram was ahead in the race for the starting right guard spot, but Davis may have gained ground against the Broncos. It shouldn’t be enough to unseat Ingram, though, who has had a very good preseason after a rough first week of camp. Oli Udoh had a good chance of earning a spot as the 10th offensive lineman, but poor performances throughout the preseason made keeping him difficult to justify. Instead, he’ll have to vie for a spot on the practice squad.

The Vikings could keep six defensive linemen, and Jalen Twyman and James Lynch are good candidates for that extra spot. In this projection, however, there’s a focus on special teams, and neither was an active participant there. Twyman flashed a bit in the preseason and camp, while Lynch has consistently played on the second team. Rookie Esezi Otomewo had a decent showing against Denver, but it likely will not be enough to counter a disappointing offseason. Instead, he’ll have to hope for a spot on the practice squad. This could change if the ankle injury T.Y. McGill sustained Saturday night is serious, but for now, the preseason superstar makes the team.

Though Janarius Robinson was inactive Saturday night, that doesn’t mean he’s made the roster. Robinson missed practices due to an injury in the week leading up to the game. That means Zach McCloud, who has played more special teams snaps than any other Vikings player this preseason, grabs a roster spot. Not only has McCloud played on every special teams unit with good results, but he’s had his moments on defense as well. That fifth spot seems to be the only one up for grabs, as both Patrick Jones and D.J. Wonnum seem to have made the team outright. The snap counts suggest that Wonnum will be the third edge rusher, but Jones has looked like the better player.

I am admittedly taking a shot in the dark here. It’s more a reflection that NFL teams don’t always do what analysts think is best. Chazz Surratt has, by far, taken more special teams snaps in the preseason than any other inside linebacker. He has played poorly in those snaps, but they keep trotting him out there. Blake Lynch is a frequent special teams contributor, has made fewer mistakes and has performed better at linebacker, so he might be next in line to take this role. Troy Dye has been disappointing thus far but has gotten a number of second-team snaps, and the Vikings could see him as the best overall option. We don’t know much about the foot injury Dye sustained Saturday, but that could play a role as well. Kwenkeu is worth keeping an eye on for the practice squad as he seems to get downfield faster than any other linebacker when given opportunities in kickoff and punt coverage.

There’s little nickel depth on the roster in this setup, and this might be an area where the Vikings stash additional players on the practice squad to create that depth. The best candidate might be Nate Hairston, who has played as a gunner and jammer on both sides of the punt team, but he has not been impressive on defense against the Vikings’ second- and third-team slot receivers. As for starters, it seems like Cameron Dantzler has won the outside starting job opposite Patrick Peterson over rookie Andrew Booth after a stellar camp.

Myles Dorn and Josh Metellus are the most likely sacrifices if the Vikings want to make room for an additional defensive lineman or nickel corner, but Dorn is a frequent contributor on every special teams unit and Metellus has been deployed in interesting ways throughout camp. With a special teams-focused roster, there’s room for both fringe safety candidates. Camryn Bynum has seemingly won the starting job over rookie Lewis Cine, but we should see Cine on the field fairly frequently as a third safety.

In: Ryan Wright, Andrew DePaola, Greg Joseph
Out: None

There are no surprises here, but it’s worth noting Wright’s incredible punting performance against Denver: a 56.3 net average and three punts dropped inside the Broncos’ 20-yard line. Greg Joseph has made every kick in the preseason, and that probably speaks just as well to long snapper Andrew DePaola as it does to Joseph.

Howard Dean optimistic about democracy, but sees work still to be...

Ruben Randall - November 11, 2022 0
Celebrity
“I think we have an obligation here (to vote). You don’t get to be a citizen and be a freeloader. The minimum you...

We provide you with the latest breaking news and videos straight from the entertainment industry.
Contact us: conta[email protected]