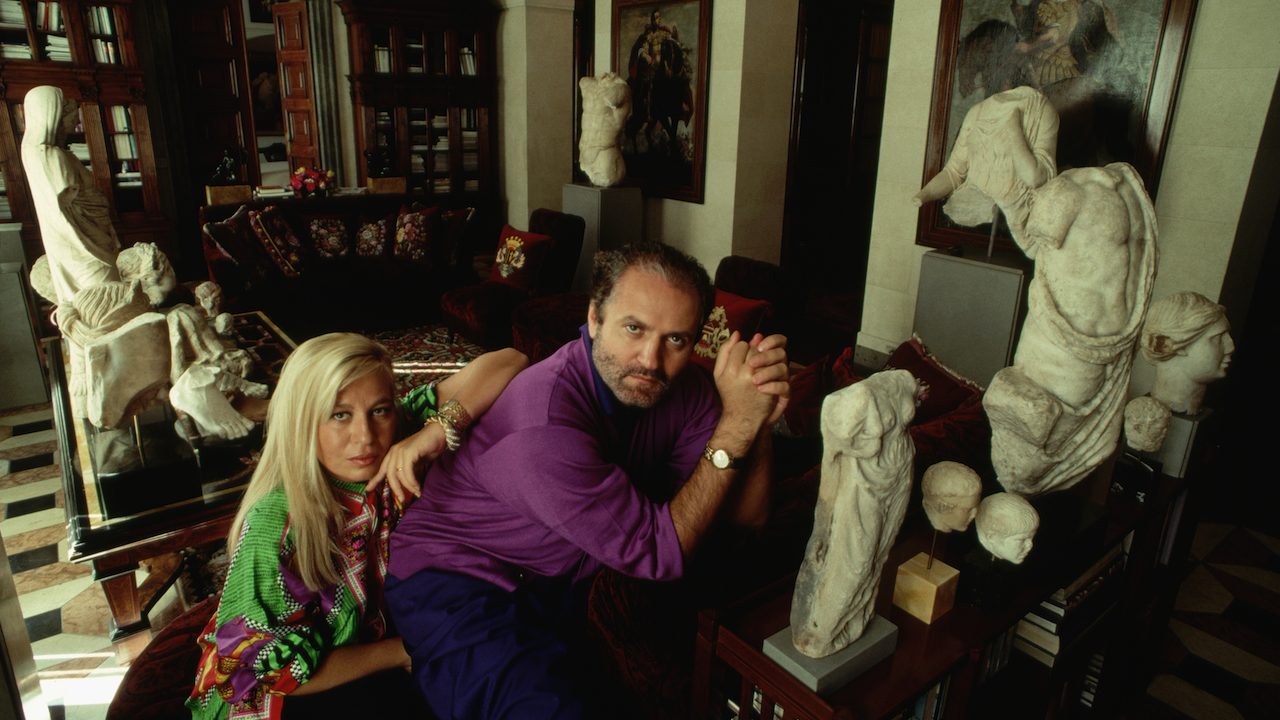 When one thinks of Versace, one might think of the supermodel-filled runways during founder Gianni Versace’s heyday in the ‘90s. One might think of its current face and creative director of the brand, Gianni’s sister Donatella Versace. Or, sadly, one might picture the caution tape outside Gianni’s Miami mansion when he was murdered in 1997 at 50 years old by a “spree killer” that rattled the world. 25 years after that tragic day, his legacy still lives on, thanks to the thread that has weaved the house of Versace together since the beginning — family.

Gianni and Donatella were born in Reggio Calabria in southern Italy. They have an older brother, Santo (who would go on to be president of the Versace company) and a sister, Tina, who died at age 12 from a tetanus infection. Fashion bonded the family early on. Their mother, Francesca, was a dressmaker, and it’s reported that Gianni would often work in her shop. Despite their nine-year age gap, Gianni and Donatella would party together, and Gianni would give his sister fashion advice. He even inspired her to dye her now-signature blonde hair when she was 11 to look like the Italian singer, Patty Pravo.

When Gianni began working under esteemed designers in Milan, Donatella, who studied languages at the University of Florence and earned a degree in Literary Studies, would visit her brother in the country’s fashion capital. He eventually opened his own brand in 1978, and Donatella began honing her eye for design and spearheaded projects for the company. In 1993, Donatella oversaw the children’s line Young Versace and was named head designer of the diffusion label Versus the following year.

Just at the height of his career, dressing supermodels in his now-iconic Medusa print and sexy silhouettes, Gianni was tragically shot on July 15, 1997 outside of his Miami mansion in broad daylight by a fame-crazed killer. With his passing, Donatella inherited a 20 percent stake in the business and became chief designer, while her eldest brother Santo, who was already serving as president of the company, received 30 percent. Donatella’s daughter, Allegra Versace Beck, was granted a majority stake of 50 percent at just 11 years old. Due to her young age, Donatella was placed in charge of her daughter’s shares until she turned 18.

See also  Get-rich-quick schemes drained my town’s wealth. At a Christian conference, their legacy lives on | US news

“By giving half of Versace to my daughter, [Gianni] forced me to take responsibility for the company until she came of age. Without this trick in the will, I might have left the company after his death,” Donatella said in an interview in 2017.

While many attempted to woo Donatella to sell the company, she refused. “Every week, men in suits came to me and said, ‘Sell us the business. None of your family will ever have to work again,’” she said. “What these people were saying scared me, because my brother would not have wanted me to sell a single office chair. To him, the company was family, and you don’t sell family.”

Her designs were not immediately received well when she began. The company also was working through financial difficulties and, as Donatella later revealed to the world, she was dealing with drug issues and entered rehab in 2005.

“I felt for a long time that I had this job because of a tragedy, not because I deserved it,” she said in 2008. “I wanted to succeed for Gianni, because he cared so much for the company and I knew he would have wanted it to carry on. But I was frightened, and I had no confidence. What I knew was Gianni’s style, because I had worked with him for 20 years, and I thought that was what people wanted from me, so I tried to follow in his footsteps. But it was not exactly my style.”

She explained that she toned down some of the things that were part of the “Versace identity” during her brother’s reign including “bright colors, very revealing clothes and a lot of decoration.”

See also  Thomas Middleditch Shares His Past as a 'Theatre Dropout'

“It took a lot of courage to get rid of those things, because I was not sure I could do Versace without them, but I found the confidence and I am very pleased I did. My revolution was successful,” Donatella said.

Allegra took her place on Versace’s board in 2011 and accepted her 50 percent stake in the company at 24 years old. In 2018, Michael Kors Holding Group, now known as Capri Holdings, purchased the Versace brand for over $2 billion. Following the acquisition, the company announced that Donatella would remain on board as design director.

She may have removed or toned down some of Gianni’s signature elements from the line, but she has often paid homage to her late brother with sentimental connections. For her Spring/Summer 2018 show, Donatella created a tribute collection in honor of the 20th anniversary of Gianni’s death. Donatella closed out the catwalk with Versace’s most beloved supermodels from the 1990s including Naomi Campbell, Cindy Crawford, Carla Bruni, Claudia Schiffer and Helena Christensen, who were all wearing gold chainmail reminiscent of the Fall/ Winter 1994 collection.

Since then, the designer has reimagined the brand’s Fall/ Winter 1992 “Miss S and M” collection, with a new iteration of the bondage dress in her Fall/Winter 2019 collection. Donatella catapulted the brand as a red carpet mainstay with celebs from Beyoncé to Doja Cat sporting her designs and helped make history when Google Images was created after Jennifer Lopez wore her plunging jungle-print dress to the 2000 Grammys.

Donatella told the New York Times in 2017, “Over the years, I’ve seen so many homages to Gianni Versace and direct reference to Gianni Versace. But I didn’t have the courage to do it myself. I was always afraid to touch the work of Gianni. I thought I would be criticized: ‘She isn’t Gianni.’ I thought I was going to fail.”

Over the years people tried to honor the designer through other mediums, like Ryan Murphy, who created The Assassination of Gianni Versace in 2018 as part of his American Crime Story FX anthology series. The Versace family, however, wasn’t supportive of the project and said it “should only be considered as a work of fiction.” (The series was based on Maureen Orth’s 1999 nonfiction novel Vulgar Favors, which the family said was “full of gossip and speculation.”)

“I still get as angry as I did on the first day when people want to make money with lies about Gianni,” Dontella said. “My lawyers tried to file a lawsuit against this television series, but they lost because my brother is a person of contemporary history and therefore has limited personal rights. Why does this TV series about my brother have to come now? The murder was 20 years ago. Can’t people leave Gianni alone?”

The limited series was filmed in Gianni’s former Miami Beach mansion, which the family sold in 2000 to telecom entrepreneur Peter Loftin for $19 million. Loftin transformed the space into a boutique hotel, restaurant and luxury event hotspot. It’s now owned by the Nakash family, the owners of Jordache, which still runs it as a premiere hospitality establishment.

An icon in her own right, Donatella’s trajectory from Gianni’s muse to fashion’s resident leading lady is even more remarkable when you consider the enormity of her inheritance after the tragedy that placed her at the helm. A clear labor of love, Donatella emerged from her mournful chapter like a phoenix from the ashes.

Great Names That Were Ruined by Television Series

Murph Training Plan: PR Your Murph Time for a Good Cause