By Katie Hind For The Mail On Sunday

Vanity Fair star Olivia Cooke has told how a television director told her to lose weight for a role when she was a slim teenager.

The actress, who is about to play the lead role in the Game Of Thrones prequel House Of The Dragon, said that her fellow cast members were forced to sneak food on to the set when she was 18 – and ten years on says she is still traumatised over his comments.

At the time, Ms Cooke, now 28, was appearing in two TV dramas – Blackout, alongside Christopher Eccleston, and The Secret Of Crickley Hall, with Suranne Jones.

While both shows appeared on the BBC, they were made by independent production companies.

She said: ‘I realised quite early on that the aesthetic and how people perceive your body is quite important. For one of my earliest jobs, the director asked me to lose weight for the role. I was already really slim, but I was young. I was 18, so I had a chubby face because I was a child. I was like, “Oh my God, I’m in the movie business, someone’s asked me to lose weight. It’s happening.”

HOW SHE’S CHANGED: Olivia at the House Of The Dragon premiere

‘I remember the cast finding out that he’d asked me to lose weight, because I did limit what I ate, so they started sneaking me food. I’m still traumatised to this day.’

Ms Cooke, who played Becky Sharp in ITV’s dramatisation of Vanity Fair, also said that the man teased her with a plate of sweet snacks.

She added: ‘He went to give me a note and had a big plate of biscuits in front of him.

‘I think it has changed a bit now, but maybe they’re more sly, they know how to word it now.’

The star – about to be unveiled as the face of Garrard jewellery, a favourite of the Queen – says she noticed she had cellulite at the age of nine but tries not to get upset about her body. 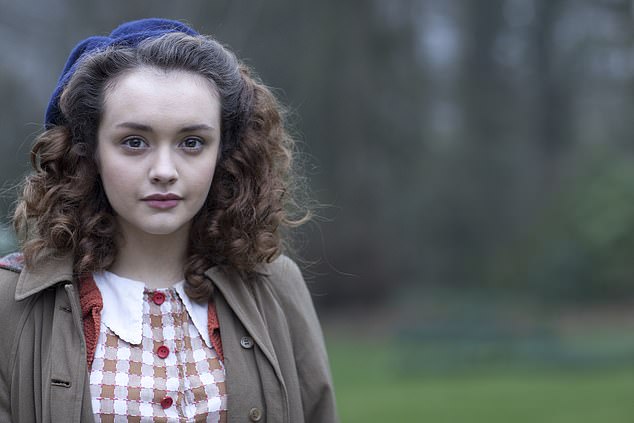 Teenage Olivia in The Secret Of Crinkley Hall

She said: ‘I remember staring at myself in the mirror, and being like, “I’ve actually got cellulite.”

‘Maybe it was a good thing to know women do have cellulite, they do have wobbly bits and people are wobbly because they’ve got fat, they’ve got skin, they’ve got texture. It’s just bodies.

‘So I have never really tried to fight that because I know that’s not what my body should look like.

‘Don’t get me wrong, I do sometimes fall down the rabbit hole of Instagram and looking at people’s artificial, photoshopped bodies and stuff like that.’