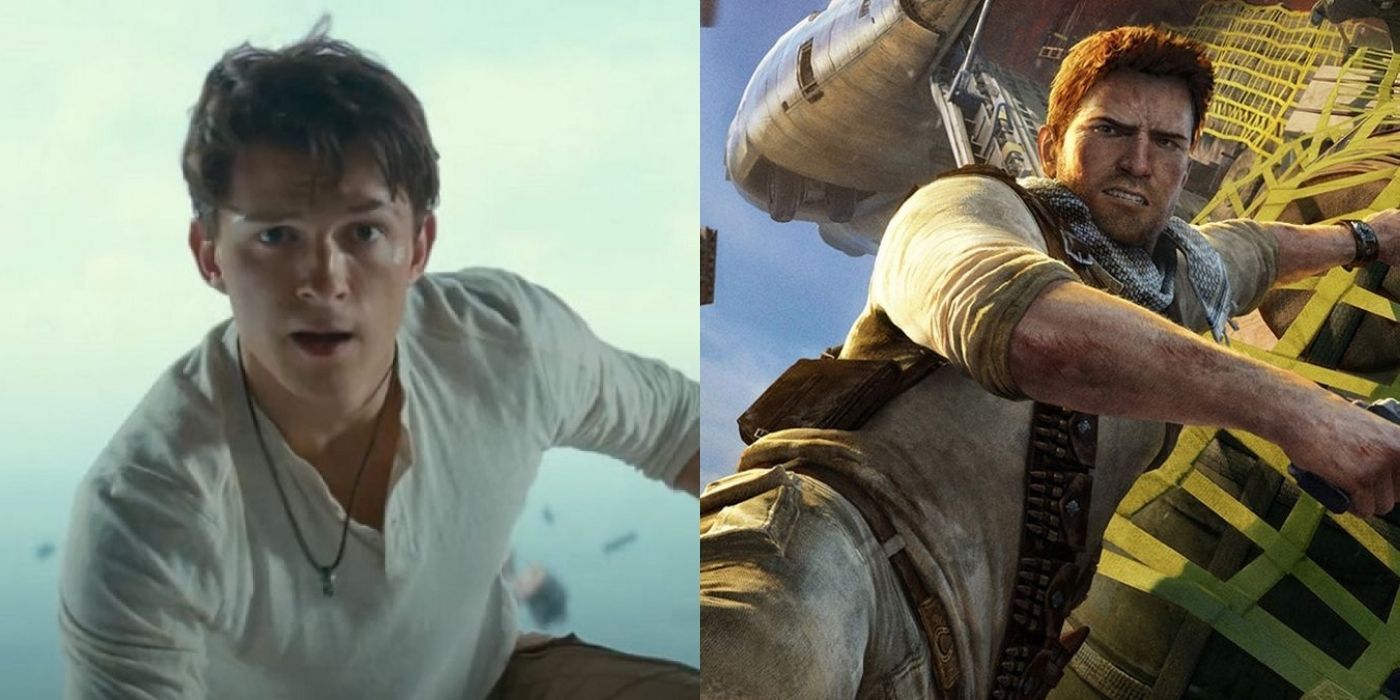 The long-awaited Uncharted movie has finally arrived, featuring Tom Holland as an adventurous young Nathan Drake and Mark Wahlberg as the shady Victor Sullivan. Like most videogame movies, tons of awesome references are scattered throughout the film for eagle-eyed fans to spot and appreciate, linking it with Easter eggs and references to the incredible franchise it’s based on.

RELATED: The 10 Best Quotes In The Uncharted Movie

Naughty Dog’s Uncharted franchise boasts a humble yet massive five mainline games across different generations of PlayStation consoles, so the movie had no shortage of neat nods to take from the games onto the big screen. From huge story plot points to Nate’s iconic ring, these allusions are sure to be discussed amongst excited fans and will be remembered for years to come.

Nate is one of the most likable Uncharted series’ characters, so it’s great to see his whole look perfected on screen, complete with his iconic Sic Parvis Magna ring around his neck. Later on in the movie, Nate picks up his classic gun holsters and immediately starts shooting like a mad man, just like in the Uncharted games. Perfection.

Left to be revealed within Uncharted’s post-credit scene, Sully’s mustache finally arrives on the big screen, alongside many other Uncharted icons. Although this may seem silly, Sully’s mustache is a genuinely exciting thing for many long-time fans, as it teases the beginning of Nate and Sully’s long friendship of treasure-hunting and adventuring.

Fans are hoping to see this relationship further explored throughout potential Uncharted sequels, as the post-credit scene teases that the story of Uncharted: Drake’s Fortune, the original Uncharted game, could be explored next, which is important as this was when most fans of the series first experienced Nate and Sully’s shenanigans. Furthermore, when Sully was cast, Mark Wahlberg was seen as a bad choice by most fans, but now Uncharted is ranked as one of Wahlberg’s best movies on IMDb, so the mustache truly has built up anticipation for his return.

After the movie came to a close and the credits began to roll, Greg Edmonson’s incredible and iconic Uncharted theme finally played in all its glory – signifying that the story of Uncharted on the big screen has truly started.

The epic theme played during a few significant moments throughout the movie, however, this was the first time it played in full. The Uncharted theme has featured in every Uncharted game without changing, so to hear the classic tune is both reassuring and exciting for long-time fans – teasing that this is just the beginning for Nate, especially now that he has become the Nathan Drake fans know and love from the games.

Any long-time fan will know that there is a lot more to Nathan Drake’s family name than meets the eye, as the games tease that the ‘Drake’ surname is a result of real-life explorer Sir Francis Drake being Nate and Sam’s ancestor.

Although Nate’s direct lineage from Francis Drake hasn’t actually been proved, it still acts as a huge driving force behind Nate and Sam’s explorer ambitions – and this is shown to be the case in the movie too. Sam tells Nate early on in the film that he was told by their parents that they were Francis Drake’s descendants. Although viewers may never have the definitive answer to this mystery, it’s still great to hear that the movie is following closely in the game’s footsteps.

Hiding Ships In A Cave

Near the end of the movie, after Nate purposefully directs Chloe in the wrong direction, he finally discovers the location of the Magellan ships and billions of dollars worth of gold. Nate is directed to the ship’s coordinates after decoding a message from Sam hidden within the postcards he sent, and he finds them beached in an ancient cavern.

This scene will feel familiar to fans of the series, as the treasure’s location is remarkably similar to where Nate finds Henry Avery’s hidden treasure in Uncharted 4: A Thief’s End – inside a pirate ship beached in a hidden cavern. In the game, it is here that Nate faces off against one of the best Uncharted villains, Rafe, whereas in the movie Nate argues with Sully. It’s amazing to see game-inspired scenes represented in the movie with its own twist, providing reassurance that future Uncharted movies could do their own thing but would never stray from what makes Uncharted great at its core.

The Search For El Dorado

As one last surprise, fans were treated with a post-credits scene that teased one of the Uncharted series’ most infamous (and first) adventures – the search for El Dorado.

The scene introduced viewers to an eye-patch-wearing character working for a certain Roman, who many fans believe to be the iconic Uncharted villain Gabriel Roman. Nate and Sully are after a map that gamers use in Uncharted: Drake’s Fortune, building up even more excitement for the teased (yet unconfirmed) sequel.

Nate’s most prized possession is Francis Drake’s ring, with the words “Sic Parvis Magna” engraved onto it, meaning “Greatness From Small Beginnings” – which essentially sums up Nate’s character as a whole.

Nate’s ring is the Uncharted series’ most iconic item and represents what makes his character so admirable and inspirational. The ring is actually the first thing fans see in the movie, highlighting how important it really is, and proving that the movie’s creative team understood Uncharted at its heart and stayed true to the series.

Another huge plot point the movie adapted from the game was Sam’s supposed death. In the games, Nate believed he watched Sam die during a prison break. However, in the movie, Nate believes that antagonist Jo Braddock was responsible.

Interestingly, the Uncharted movie franchise has already revealed that Sam is still alive, currently locked away in a prison, similar to Uncharted 4. This reference honors the overarching story of the games and the Drake brothers’ complex relationship, and it hints towards an exciting reunion between Nate and Sam in an Uncharted sequel.

One of Uncharted’s most mindblowing scenes occurs quite late into the movie, where Sully and Nate sneak onto a plane just to fall from it moments later, in classic, dramatic, Uncharted fashion.

This scene featured tons of stunts and jaw-dropping moments, leaving fans on the edge of their seats with the intense situation Nate found himself in. Nate’s leap to each crate and the fight sequences were taken directly from one of the best Uncharted game scenes ever, Uncharted 3: Drake’s Deception. It was incredible to witness this exciting moment on the big screen, and it was a great chance for fans to relive the game in a brand new way, with modern-day technology, state-of-the-art CGI, breathtaking acting, and incredible stunts.

In a special moment for long-time fans, Nolan North, Nathan Drake’s voice actor in the games, briefly cameos on a tropical beach after Nate and Chloe arrive onshore.

This was a wholesome moment for fans, as Nate and Nolan briefly made remarks about falling out of a plane – a scene hugely inspired by Uncharted 3. During his short cameo, the epic Uncharted theme tune played in the background, honoring Nolan North’s incredible portrayal of Nathan Drake throughout the Uncharted game series.

NEXT: 10 Things Only Die-Hard Fans Know About Uncharted

Why Michael Keaton Is Back As Batman

Ruben Randall - January 2, 2022 0
Money
The price of bitcoin hit record highs in 2021 thanks to support from traditional finance, but cryptocurrency specialists are struggling to predict next year’s...