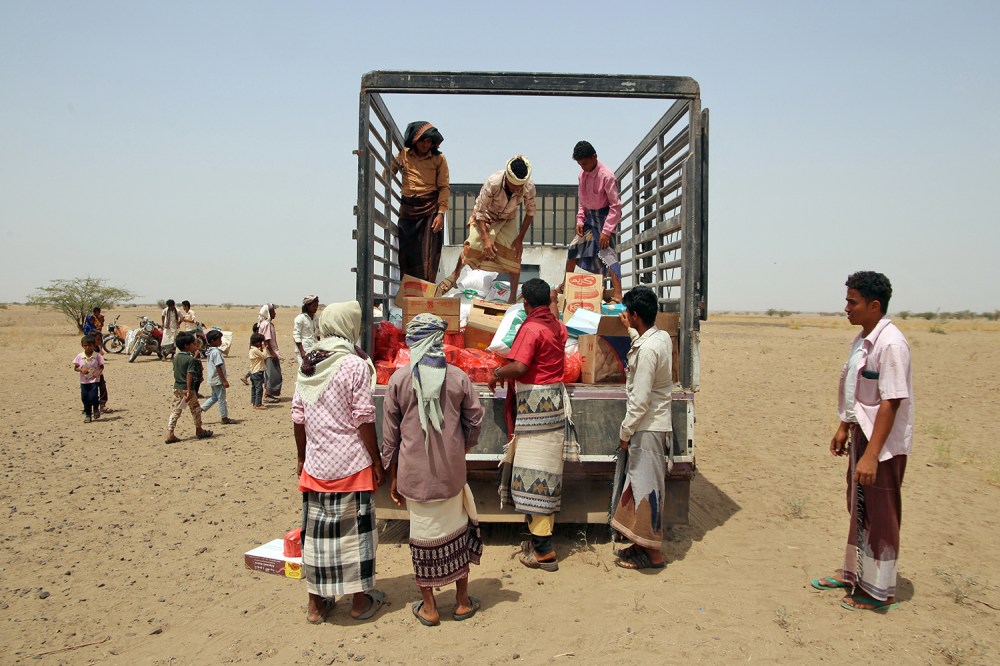 To listen to Qu Dongyu, the director-general of the United Nations’ Food and Agriculture Organization (FAO), you would never know that Russia has been bombing Ukrainian farms and granaries, imposing a sea blockade on Ukrainian grain exports, and generally accelerating a global food emergency that risks sending tens of millions of additional people into an acute hunger crisis.

Ever since Russia launched its invasion of Ukraine on Feb. 24, Qu, a former senior Chinese government agricultural official, has studiously skirted matters of Russian culpability, speaking vaguely about the impact of the war in Ukraine on food supplies, while remaining silent about Russian Black Sea blockade that has prevented Ukraine from exporting millions of tons of grains onto the world market. At the same time, Qu has repeatedly echoed Russian concerns that international restrictions on its exports are responsible for growing food scarcity.

“Sanctions are a double-edged sword,” he warned in a March 25 statement. “To prevent the world from a global food security crisis, we must ensure that global trading continues to function smoothly and openly. Exports should not be restricted or taxed, and markets should be kept open.”

The war in Ukraine has provided a critical test of Chinese leadership at the FAO in a crisis that has global political, economic, and humanitarian repercussions that could help shape the balance of power in Europe and beyond. Both Republican and Democratic administrations in Washington have raised concerns in the past that Chinese leaders of international organizations would be unable to serve as impartial civil servants, instead working to serve the interests of Beijing and its allies. In recent weeks, the Biden administration has been seeking to drive a wedge between Russia and China, and has been applying pressure on Beijing not to take steps to shield Moscow from the sting of sanctions. That effort has extended to the FAO.

It is not unusual for international civil servants to hold their tongues on sensitive matters of war and geopolitics, preferring to deliver services under the radar. Still, the FAO chief’s cautious public statements have rankled U.S. and European policymakers, who have pressed him to follow the example of U.N. Secretary-General António Guterres, who has bluntly and repeatedly denounced Russia’s invasion as a flagrant violation of the U.N. Charter. For the West, Qu’s response to the Ukraine crisis provides a critical test of whether a new generation of Chinese leaders of international organizations can act impartially.

“Russia’s actions are affecting the entire global food supply chain, as the world still grapples with the pandemic and devastating climate change events,” Cindy McCain, the U.S. ambassador to the U.N. food agencies, said in April 8 remarks before the FAO Council, the member state body that oversees the food agencies’ work. “FAO must align itself with the U.N. secretary general and the overwhelming majority of U.N. members in condemning Russia’s actions, demanding its immediate withdrawal, and explicitly linking Russia’s actions to exacerbating global hunger,” she added.

The dispute at the Rome-based food agency is playing out against a backdrop of competing Western and Russian narratives over the causes of global hunger crisis, part of an East-West power propaganda battle aimed at apportioning responsibility to what many policymakers fear is mounting international food calamity. The United States, which will hold the rotating presidency of the Security Council next month, plans to host a high-level meeting on food security hosted by Secretary of State Antony Blinken.

The U.N. estimates that if the war in Ukraine continues some 47 million people in 81 countries will be added to the already swelling ranks of those enduring acute hunger, according to a recent report by the World Food Program. Even before the Russian invasion, the world was facing growing hunger, with some 276 million people facing acute hunger.

The United States and its Western allies contend that blame for the latest surge rests squarely on Russia’s shoulders, because its military intervention has deprived the world of desperately needed wheat and grains. Its Black Sea blockade of one of the world’s largest exporters of wheat and other staples, combined with attacks on Ukrainian farms, is driving up the cost of global food prices at a time when supplies were already perilously tight.

The FAO declined to respond to questions about Qu’s stance, but it directed Foreign Policy to the agency’s website describing the impact of the war on Ukraine and a link to the director-general’s address to the finance ministers of the G-20 nations. During the briefing, Qu noted the U.N. secretary-general’s call for the conflict in Ukraine to stop, saying it was threatening global food security. But he declined to criticize Russia.

The FAO’s public response has largely fallen in line with China’s and Russia’s public pronouncements on the global food crisis, but experts remain divided over whether Qu is putting his thumb on the scales.

Qu’s public statements are “basically anti-sanctions and largely reflect the position of the Chinese government,” said one FAO consultant, who spoke on condition of anonymity because he was not authorized to speak publicly about the agency’s response to the Ukraine crisis. “With that said, there are some good arguments for exceptions from sanctions for fertilizers and other agricultural inputs, and making those arguments fits in with past FAO policies opposing trade restrictions. I actually think FAO would have come out in the same place if the director-general were not Chinese.”

But the lack of public attention from the FAO on Russian actions is jarring, said Joe Kraus, policy director for transparency and accountability for the ONE Campaign, an anti-poverty advocacy group.

“I would imagine sanctions on Russia haven’t helped the food security situation, but I don’t see it as the central issue,” he said. “There is also pretty concrete evidence that Russia is intentionally targeting farmers.”

“I would hope people in official positions of power would look at the evidence, and if there is clear evidence one side is targeting food supplies that could cause tens of millions to starve they should speak the truth,” Kraus said.

For Courtney Fung, an associate professor at Macquarie University in Australia who studies the role of China in international organizations, the U.S. pressure campaign is part of a test.

“In pushing for the FAO [chief] to issue a public condemnation of the Russian invasion, the Biden administration is probing how China operates in multilateral institutions, another arena of strategic competition,” she said. “Do [Chinese] officials heading U.N. agencies adhere to China’s line of a Ukraine ‘situation’ or do they join the international community deploring the Ukraine war and the fall-out of the Russian invasion?”

“China emphasizes technocratic, depoliticized global governance leadership,” she said. From the perspective of the Chinese government, she added, “the FAO successfully addressing the emerging food crisis is best done by Qu avoiding high politics and focusing on his institution’s mission of defeating hunger.”

The dispute comes at a time when Guterres has been sounding the alarm about the war’s global impact, saying the conflict is “supercharging” a food, energy, and finance crisis that is already “pummeling some of the world’s most vulnerable people, countries, and economies.”

The combination of the war in Ukraine, the COVID-19 pandemic, climate change, and a shortage of international funds to help poor countries weather these crises is creating a “perfect storm that threatens to devastate the economies of many developing countries,” Guterres said. “Thirty-six countries count on Russia and Ukraine for more than half of their wheat imports—including some of the poorest and most vulnerable countries of the world,” he added.

Russia has sought to minimize the role of its Ukraine invasion, contending that the global hunger crisis has been precipitated by U.S. sanctions and conflicts in Afghanistan, Syria, Iraq, Yemen, and Libya.

“The conflict in Ukraine has become just another drop in the conflicts’ bucket, a bucket which has been filling up for 20 years now,” Russia’s envoy to the U.N. food agencies, Victor Vasiliev, wrote in an April 8 letter to the FAO director-general.

“The special military operation by Russia in Ukraine has little impact on global agricultural production,” he said in a statement to FAO’s executive council. “The main problem is the rupture in industrial haulage and financial chains due to the introduction of illegal unilateral sanctions against our country by the West. In fact, large-scale economic war has been declared on Russia.”

But Russia, the world’s largest exporter of wheat, has warned that it would use food as a weapon of war, restricting exports to friendly countries. “We will supply food and crops only to our friends,” Dmitry Medvedev, Russia’s former president and current national security advisor, wrote recently on Telegram.

A State Department spokesperson dismissed Russia’s contention that Western sanctions are contributing to the global food crisis, noting that all trade in food, humanitarian supplies, and vital products such as fertilizer are exempt from U.S. sanctions.

“It is Putin’s unjustified, unprovoked war against Ukraine that has put millions around the globe at risk of food insecurity,” the spokesperson, who spoke on condition of anonymity, told Foreign Policy. “Putin started a war between two of the world’s most significant exporters of agricultural commodities and fertilizer. In doing so, Putin has guaranteed that the cost of his reckless campaign will be felt by the world’s most vulnerable citizens.”

Ukraine and Russia supply around 30 percent of the world’s wheat and barley, one-fifth of its corn, and over half of its sunflower oil, according to U.N. figures. In March, global food prices were 34 percent higher than the previous year, while gas and fertilizer prices had more than doubled, according to the FAO. Exports of food, fertilizer, and other basic commodities are largely exempt from sanctions, providing Russia with an opportunity to sell on the open market. But Russia has imposed its own restrictions on fertilizer exports, further squeezing an already tight global market on fertilizers.

But Western financial sanctions and other measures imposed on Russia and its key ally Belarus have limited food exports. For instance, Belarus, which produces some 20 percent of the world’s potash used in fertilizer, can’t ship through the Baltic Sea because of export restrictions imposed on the government last year. Those restrictions were imposed after Belarus forced a Ryanair flight to land in Minsk, where the government seized an opposition activist. Western financial sanctions have exacerbated humanitarian crises in other countries, particularly in Yemen, deterring international traders from importing food, fuel, and medicines into the conflict-wracked country for fear of being sanctioned.

Even before the war, Russia had imposed export taxes on its wheat, and the insecurity brought about by trading in a war zone has driven up shipping and insurance costs. “Exports are moving,” but at a slower pace, Joseph Glauber, an economist and senior fellow at the International Food Policy Research Institute, told Foreign Policy.

Glauber said he believes there are workarounds to minimize the impact of sanctions, though some financial measures, including the exclusion of several Russian banks from the SWIFT system, a financial platform for financial exchanges, are likely to hamper trade with relatively small outfits.

“If you are shipping to a big importing country in North Africa, and you’re dealing with the government ministry, they are big enough to make the transactions,” he said. “But if you are a small flour producer in Turkey you may be facing issues in terms of how to pay for that wheat.”

Glauber said that while the FAO and other international agencies may seek to avoid finger pointing given the political sensitivity surrounding the conflict, he has seen no evidence that the food agency is taking sides: “As far as the analytical stuff I have seen from FAO it looks very, very solid.”

Jordan Peele Invades the Western With ‘Nope,’ a Thrilling Salute to Spectacle