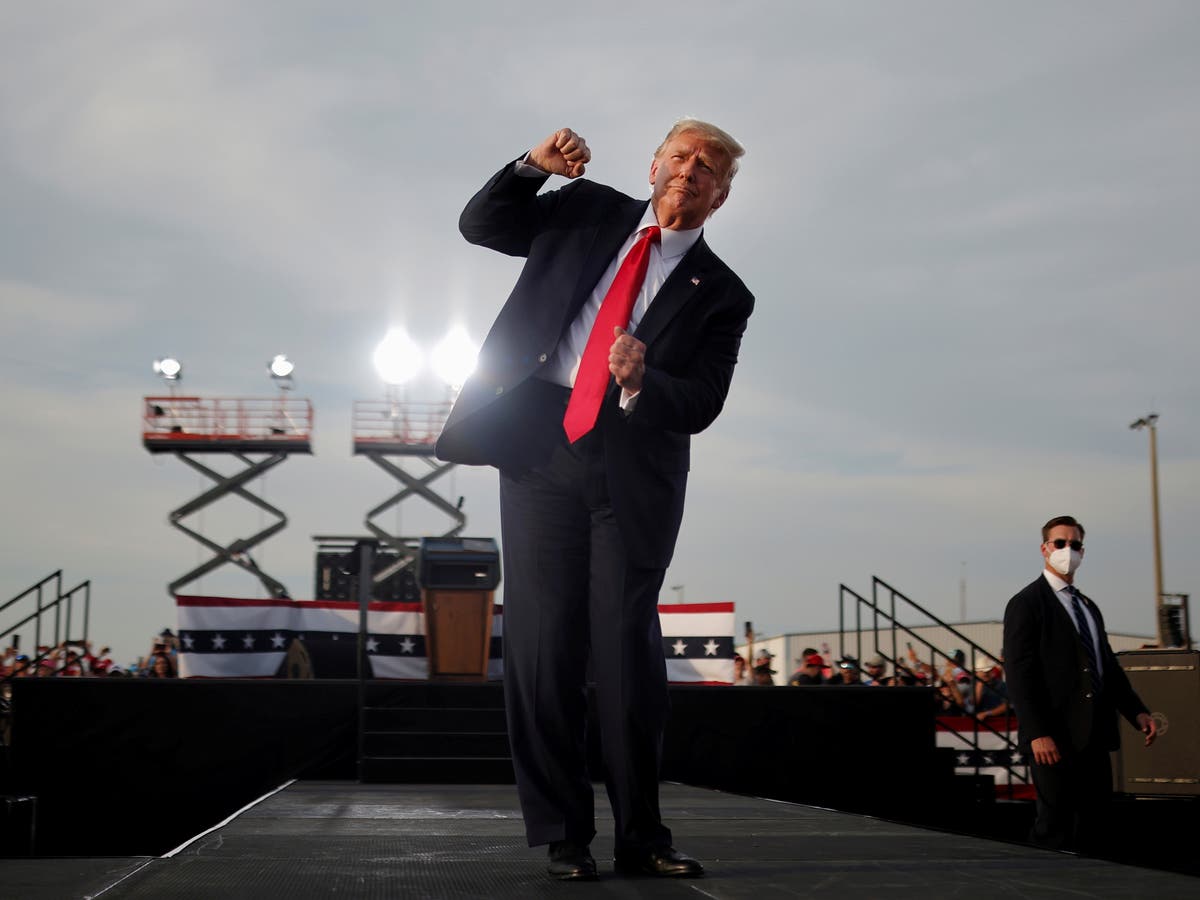 Donald Trump has withdrawn his endorsement from Alabama congressman and Senate candidate Mo Brooks, citing his longtime ally’s “horrible mistake” of suggesting that Republicans need to move on from the claim that the 2020 election was stolen.

Mr Trump accused the congressman of “going woke” in a lengthy statement this morning. He raised the possibility of retracting his endorsement in a recent interview, after which Mr Brooks released an ad boasting of his appearance at the rally outside the White House before the 6 January Capitol riot.

In a statement, Mr Brooks revealed that from September 2021 onwards, Mr Trump repeatedly asked him to rescind the 2020 elections, immediately remove Joe Biden from the White House, reinstall him as president, and hold a new special election for the presidency. The Alabama lawmaker says he knew it was legally impossible.

On another front, Mr Trump and his children Donald Jr and Ivanka have filed an appeal in their fight against the New York attorney general’s attempt to depose them as part of a civil investigation into the Trump Organization.

Ms Trump has stepped up in the effort to support Ukrainian refugees by sending 1 million meals to Poland for distribution through charitable partners and aid workers on the ground there and in Ukraine.

Finally, in an unexpected development over the weekend, disgraced ex-Trump campaign manager Paul Manafort, who has links to Russia, was stopped from taking a flight from Miami to Dubai because of an invalid passport.

An innocent-seeming Twitter account made its way to Tucker Carlson’s Fox News programme this week. However, seemingly unbeknownst to the conservative cable news host, the account actually has gone after Mr Carlson in the past – and whose username was inspired by a pornography site.

Marjorie Taylor Green said she agrees that Ukraine president Volodymyr Zelensky is a “thug” and that his government is “corrupt”.

She made the comments during a town hall meeting where an audience member asked if she agreed with Republican colleague Madison Cawthorn.

“Yes and yes. That’s an easy one,” she said, according to Politico.

Ivanka Trump has purchased 1 million meals to deliver to people in Ukraine and Ukrainian refugees on the Poland-Ukraine border, Fox News has learned.

Former President Trump’s eldest daughter personally contributed hundreds of thousands of dollars for the 1 million meals, which amounted to 158,400 pounds of food to Europe, a source familiar told Fox News.

Trump worked to connect several nonprofit organizations, including CityServe, City of Destiny and Mercy Chefs to help package shelf-stable meals of oatmeal and goulash. The choices of meals came from advised food preferences of aid workers in Ukraine.

Trump had been coordinating with the UPS Foundation, and her partners – City Serve, City of Destiny, the Pentecostal European Fellowship and several local church organizations – to deliver the food to Warsaw, Poland.

From there, local partners, including hundreds of volunteers from the local community and faith-based organizations, are set to deliver the meals to Ukrainians seeking refuge in Poland, as well as to families still inside Ukraine.

Far-right conspiracy theorist Alex Jones has breached a court order by failing to show up for a deposition in a lawsuit over his false claims about the Sandy Hook massacre, after a judge rebuffed claims that he was too sick to appear.

The Infowars host was scheduled to appear in person at 9am local time in Austin, Texas, on Wednesday to be questioned under oath as part of settlement proceedings in defamation cases he lost against the families of victims killed in the 2012 mass shooting.

Rachel Sharp has the story.

ICYMI: Paul Manafort prevented from leaving the US

It has emerged Paul Manafort, the disgraced former Trump campaign manager whose dealings in Russia landed him in severe legal trouble and became the centre of the FBI investigation into Donald Trump’s Russian connections, has been prevented from boarding a plane to the Middle East and had his US passport revoked.

The group of conservative activists were reportedly working with the “US Election Integrity Plan,” a group that organises canvassers. According to the lawsuit, the group and three of its leaders allegedly violated the Voting Rights Act by using “intimidating, threatening and coercive conduct” in the course of its actions.

The canvassers in question visited homes, allegedly in neighbourhoods where many people of colour lived, and went door to door interrogating people over what they claimed was a fraudulent presidential election.

Alyssa Farah Griffin, the former aide to Mike Pence and Trump White House staffer, bemoans some in the Republican Party’s focus on the 2020 election.

She tweets in response to the Mo Brooks revelations regarding Donald Trump wanting to “rescind” the 2020 election: “I’ve said countless times: election denialism will continue to create issues for the GOP if they don’t disavow & move on.”

See also  “The platform has to solve not just the problem of jobs, but also improve quality of life”, Hospitality News, ET HospitalityWorld

“If Trump runs in 2024 – a major focus will be relitigating the 2020 election that he lost. Why would the GOP humor this? We have credible alternatives.”

Former Alaska Governor Sarah Palin has requested the judge who presided over her unsuccessful defamation trial against The New York Times to disqualify himself from the case, arguing that he “contaminated” jurors who delivered the verdict.

Attorneys for Ms Palin – who accused the newspaper of defaming her in a 2017 editorial – pointed to the rare announcement from US District Judge Jed Rakoff to dismiss the case while jurors were still deliberating, according to federal court filings in New York City on 22 March.

Alex Woodward has the story.

NBC News’ Vaughn Hillyard spoke with Alabama Senate candidate Mo Brooks about the conversations he revealed he had with former President Donald Trump, now that he has lost his endorsement.