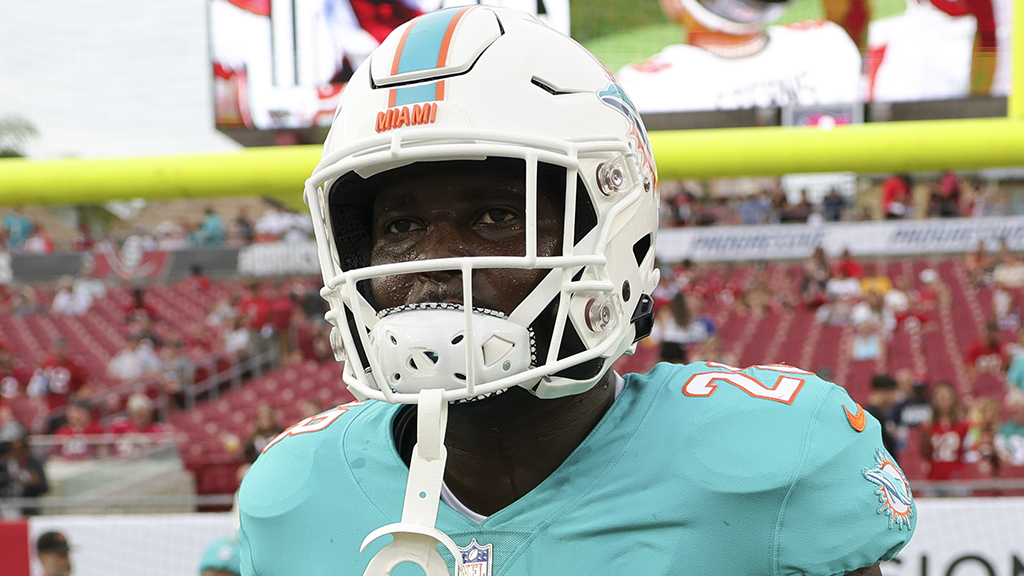 The Miami Dolphins parted ways with running back Sony Michel last night, but this is probably not the end of the road for the former first-round pick. While he’s no superstar, Michel is a competent runner and an above-average pass blocker that should be able to land a new job in the injury-riddled landscape of the NFL.

The #Dolphins have released former #Patriots and #Rams RB Sony Michel, among others.

First, let’s talk about Sony Michel as a player. While he never managed to live up to his hype coming out of Georgia, the running back can play ball at an NFL level. Last year, Michel spent the year backing up Cam Akers and Darrell Henderson but managed to make the most of his opportunities when injuries struck.

Over the final six games of the regular season, Sony Michel served as the Rams de-facto three-down back. Given his time in the spotlight, Michel finished his stretch as the starter with 540 rushing yards and three touchdowns on 129 carries (4.19 yards per carry) to go along with 10 receptions for 66 yards. Additionally, even if he’s not a threat as a receiver, Michel can justify a third down playing time thanks to his phenomenal pass blocking.

Once again, nobody is claiming that Michel is going to win the rushing title this year. After all, there is a reason that he didn’t make Miami’s final roster, as he lacks the breakaway speed that Mike McDaniel covets in his backfield. However, he knows how to follow a block and can easily be a valuable part of a running back by committee.

The 2o21 Baltimore Ravens had their backfield decimated by injuries, and they’re not fully recovered heading into 2022. Gus Edwards is on the Physically Unable to Perform list, meaning that he’ll miss the first four games of the season, at the very least. Third-year running back J.K. Dobbins, meanwhile, is currently questionable for Week 1. However, even if he is ready, it’s safe to say that he won’t look like his old self right out of the gate.

If the season began today, journeyman veteran Mike Davis would be leading Baltimore’s backfield. Needless to say, that is not an ideal situation for the Ravens. Michel would be an immediate upgrade and could easily serve as a spot starter until Dobbins returned to form. Once Dobbins is back to his old self, Michel could be an ideal backup for this run-heavy scheme.

All training camp reports indicated that Washington Commanders running back Brian Robinson was going to see a big workload right out of the gate. However, that changed after the Alabama product suffered non-life threatening injuries during a carjacking. Needless to say, Robinson’s long-term health is far more important than his football future, but somebody will need to take those carries while he recovers.

Antonio Gibson is an exciting player, but there is a reason that Washington’s coaching staff refuses to give him a major workload. Robinson was projected as an early-down runner that could thrive in short-yardage situations, and Michel has been used in a similar manner throughout his career. Gibson would be the unquestioned starter, but Michel would be able to mitigate some of the on-field impact of Robinson’s absence.

According to just about every report out there, free agent signee Ronald Jones isn’t exactly living up to the hype in Kansas City. Signed as a pure downhill runner, Jones has reportedly fallen behind 30-year-old Jerrick McKinnon and seventh-round rookie Isiah Pacheco on the depth chart and could very well lose his job in the coming days.

Jones’ fit in Kansas City was always a strange one. While the former Tampa Bay Buccaneer was always a good one-cut runner, he could very well be the worst receiving back in the league. Tom Brady loves targeting running backs in the passing game, and his two years in Tampa Bay is all anyone needed to know that every pass intended for Ronald Jones was a bad idea. In addition to his poor hands, he is also a terrible blocker and an active liability to the quarterback whenever there’s a blitzer.

The Chiefs clearly signed Jones hoping to improve their run game, but their pass-heavy nature was always a bad fit for Jones’ abilities. If Kansas City is still looking for a decent early-down runner that can justify a spot on the field on passing downs, then Michel could be exactly what the doctor ordered.