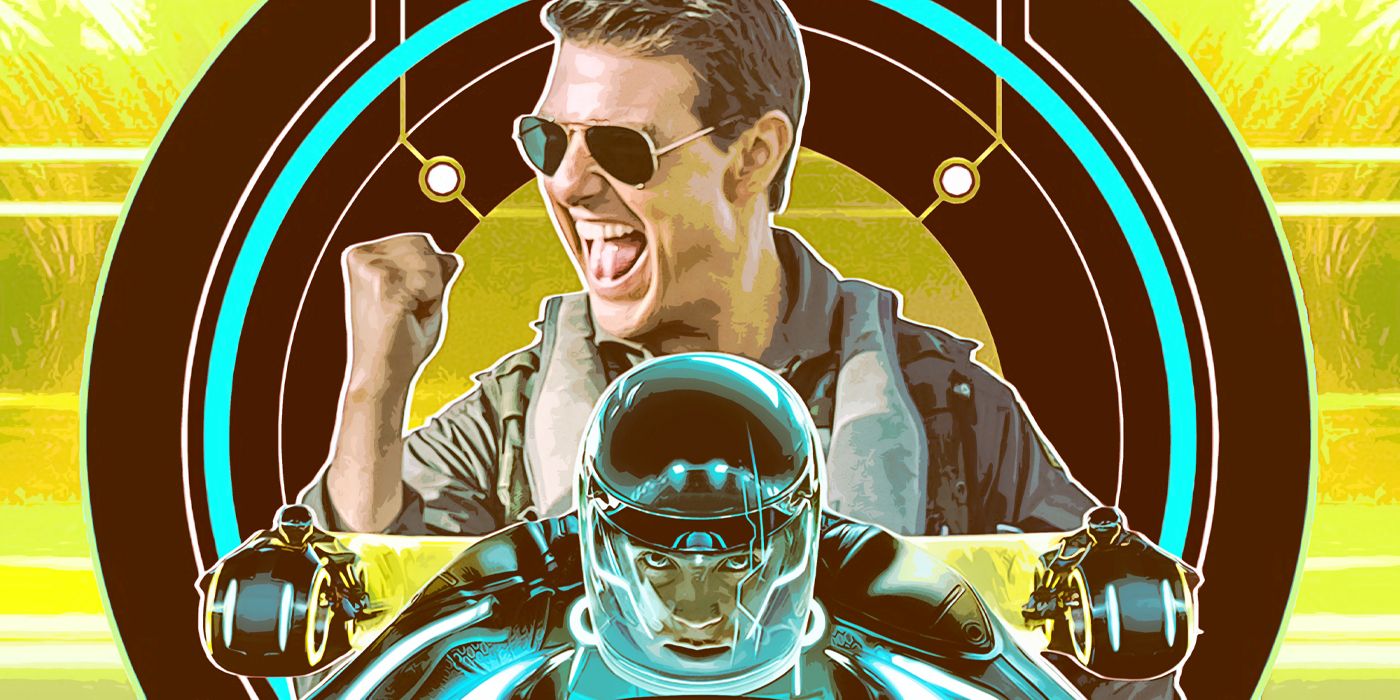 There’s this tiny film out there that a lot of you might not have heard of called Top Gun: Maverick that’s been doing fairly well for itself. It seems like every week there is news of the blockbuster breaking another record, pulling in unprecedented revenue even as it migrates from theaters into homes. Its immense success is a breath of fresh air in cinema, showing that fantasy and superhero films don’t have the type of movie theater monopoly that pessimists might have claimed. Tom Cruise is one of the few true movie superstars left, his name alone powerful enough to lift people off their couches and into seats, and his magnetism will likely be credited for much of the movie’s success.

But while Cruise has enjoyed this sort of prosperity ever since he first went by the codename Maverick, director Joseph Kosinski hasn’t experienced the same sort of widespread acclaim. His relatively short career has produced nothing but ambitious efforts, but none of them have experienced both commercial and critical success until he brought the iconic pilot back to the silver screen. In the same vein of re-interpreting ’80s hits in the 21st century, Kosinski’s first feature was the critical dud Tron: Legacy, which hit theaters in 2010. And while it understandably never reached the heights of Top Gun: Maverick, the now cult classic showcased Kosinski’s immense talent in the realms of action and atmosphere.

Tron: Legacy occupies a unique spot in Disney’s catalog. It was no doubt a cash grab from the studio, trying to profit from the growing cult status of the original. But the outcome is far removed from the formula that you see countless reboots sculpted from. It embodies certain mannerisms of a run-of-the-mill Disney blockbuster, investigates familiar family dynamics and inner turmoil in a recognizable manner. But it also exhibits loads of ambition, spending $170 million on what at times feels like a genre film meant to be watched no earlier than midnight. It’s cyber-punk at its most commercial rather than a commercial feature at its most cyber-punk, seeking to craft an accessible tale from a techno-expressionistic realm more evocative than most sci-fi worlds are allowed to become. The movie was marketed heavily and made $400 million at the box office, but seemed like its destiny would be that of one of the most expensive cult classics ever made, and that’s exactly what it’s become. It won’t go down as one of Walt’s most crowning achievements, but instead rests comfortably in its position as one of the most interesting “bad” blockbusters ever made, with a handful of diehards who adamantly preach its potency and importance.

Tron: Legacy follows Sam Flynn (Garrett Hedlund), your typical bad boy with a tender heart, his James Dean persona spurred on by the disappearance of his technocrat father, Kevin (Jeff Bridges), the man who invented the most popular video game in the world — called Tron, of course — before vanishing. There’s a mumbling jumbling expository period where Flynn showcases how far he’s strayed off his path, trying to keep his father’s company alive despite it falling into greedy corporate hands. But eventually Flynn stumbles his way into his father’s old arcade and teleports into the actual video game of Tron, a realm called The Grid. And while a story guides the Flynn through trials and tribulations, Tron: Legacy‘s world is what grasps and holds attention.

Its atmosphere is engulfing, and the look of The Grid is groundbreaking. Films from just a decade ago are often described as “holding up well,” but that would be an insult to Tron: Legacy because its world is much more engrossing than 99% of what gets released today. Its visuals (other than an absolutely horrifying CGI de-aged Jeff Bridges) are on the same level as The Matrix in the way they both find ways to craft a singular realm with its own distinct visual language. The Grid feels like if the German expressionism movement was birthed from Daft Punk, who produced the film’s immaculate score. The pitch black architecture is meticulously accentuated with neon lines and walls of glass, brush strokes of vibrancy interrupting an otherwise obsidian universe. The world Kosinski constructed is what makes the film worth watching.

Strength in Sentimentality and Nostalgia

Although the two atmospheres couldn’t be more different, Top Gun: Maverick‘s unabashedly ;80s environment is largely what makes the film feel so galvanized. So many shots are soaked in sweat, caked in tan, set against the backdrop of sun-kissed skylines, reveling in a world so entrenched with brazen sentimentalism that the audience can’t help but be swept away in its undertow. Although it’s set in reality (a reality in which every 50-something looks like Tom Cruise and Jennifer Connelly), its world is as fabricated as Tron: Legacy‘s, constructed around the sentiment that the original Top Gun evoked rather than a realistic recreation of anything that it’s depicting. Orchestral swells replace Daft Punk’s surging synths, but everything in each film is designed to pique emotional involvement, eliciting sentiment from its atmosphere rather than the characters. Kosinski’s ability to extract heaps of emotion from his own meticulously crafted worlds is what makes both of these features so entrancing.

If one image is synonymous with the world of Tron, it’s the lightcycle. Like the lightsabers of Star Wars or Charlie Bucket’s golden ticket, the lightcyle is the type of iconography to transcend the film and become known even by those who have never stepped foot on The Grid. And although we only get one lightcycle race in the 2010 film, boy is it a doozy. Kosinski shows a knack for large scale action, a feel for how to make the massive feel truly stimulating. The lightcycle scene is extremely smooth as it relies upon the visual effects team rather than the editor to concoct the excitement. It’s an incredibly crisp and coherent sequence as we watch the blue and orange techno-bikes glide across The Grid, the thrill stemming from lucid imagery rather than Kosinski trying to implant his own excitement with an abundance of cutting and hectic camerawork.

Kosinski shows an understanding of how to capture the excitement of vehicles in action, which of course is replicated with the fighter jets in Top Gun: Maverick. He relies upon the pure physicality of the planes, the storied refusal of CGI helping the flying feel more visceral. Each gear shift and barrel roll not only maximizes the thrill but coincides with the timeline of the action, never sacrificing cohesion in its pursuit of excitement. Both the lightcycles and fighter jets are masterclasses in their ability to feel gripping while remaining coherent as Kosinski shows he knows how to make vehicular spectacle feel hair-raising.

The Leading Man Makes All the Difference

But Tron: Legacy raises a finger to ask if Kosinski knows how to work with his actors, as their performances never reach the heights that the director’s technical prowess demands. It would be harsh to label Garrett Hedlund as a bad actor, more of a character actor trapped in a leading man’s body. But the external star appeal led Kosinski to make the mistake of trying fashion a star out of someone who was never meant to shine that bright. Hedlund’s performance is a dud, it’s difficult to spin it any other way. His feet are too small for the shoes he was asked to fill. His lines are delivered with faux-confidence, his presence pales in comparison to that of his supporting cast. The character was clearly envisioned to be the face of a franchise, Sam Flynn action figures sitting on the bedroom shelves of countless children. But Hedlund, simply put, wasn’t that guy, and Kosinski couldn’t cast the safety net to halt Hedlund’s tumble.

Tom Cruise, however, isn’t Garrett Hedlund. But, to be fair to Hedlund, there really is only one Tom Cruise. Few true superstar actors defy typecast as well as our last action hero. Not many with such a recognizable name can go from Mission: Impossible to Tropic Thunder to Eyes Wide Shut so seamlessly. There may be no actor who knows how to play the character he’s been assigned better than Cruise, no actor who needs such little guidance from their director. So the pressure put on Kosinski to turn his lead into a star was no longer there. With Cruise’s ability to coach himself, as well as the rest of the cast, the potential of a leading-man let-down was off the table. The promise of Cruise instead Hedlund meant that not only would the seats fill up faster, but Kosinski wouldn’t have to worry about the side of production he wasn’t as comfortable directing.

Tron: Legacy showed that Kosinski always had the talent. His ability to build a world and craft an atmosphere was evident in his debut. There were certainly flaws in his first feature that prevented Tron: Legacy from being the groundbreaker it so nearly became, but most of them could be chalked up to inexperience.

Top Gun: Maverick embodies so much of what worked well in Kosniski’s debut, making Tron: Legacy a fascinating stylistic precursor to a film that will surely earn its place as one of the defining features of the decade.

“Ben Simmons Isn’t Afraid of Missing Shots, as Much as of Being Fouled”: Brian...