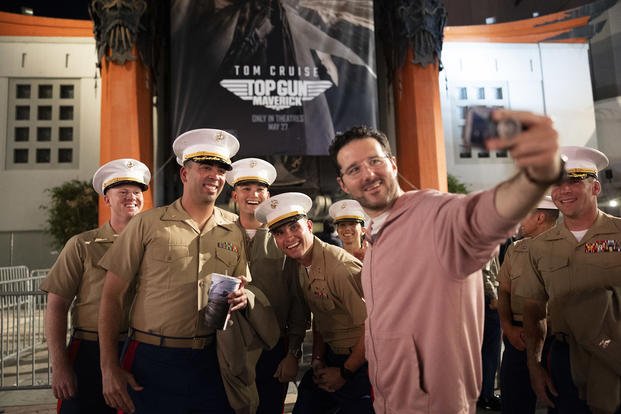 When “Top Gun: Maverick” premiered earlier this summer, it quickly rode on massive waves of nostalgia and patriotism to historic box-office ticket sales surpassing those of its 1986 predecessor.

While many in the military credited the original 1986 “Top Gun” with giving a much-needed boost to the Navy’s recruiting and culture, it wasn’t the surge that has become part of the movie’s lore.

And just a few years later, the service would be embroiled in the Tailhook Scandal — in which Navy and Marine Corps officers were accused of sexually assaulting 83 women and seven men during a Las Vegas conference. Investigators and officers pointed toward themes in “Top Gun” as part of the problem.

Read Next: A String of Mishaps Shows How Tricky It Can Be to Keep the Aircraft on Aircraft Carriers

Investigators said “the movie fueled misconceptions on the part of junior officers as to what was expected of them and also served to increase the general awareness of naval aviation and glorify naval pilots in the eyes of many young women.”

Nearly 40 years later, “Top Gun: Maverick” was released to an American public far different from the one sitting in theaters in the 1980s.

The Navy currently faces a crisis getting people to enlist and is offering a wide range of financial incentives to make its end-of-year recruiting goals, the sort of environment in which any kind of helpful public attention could be a boon.

The broader military also continues to grapple with the issue of sexual assault, with reports reaching new highs in 2020 — 6,290 incidents across the services, according to a Pentagon report.

It will be years before the impact of the latest “Top Gun” movie is clear, if there is one, but few film franchises if any have a legacy as deeply rooted in military culture, the sort of hold that can shape a generation of those in uniform.

Selling the Need for Speed

A statistic often repeated without attribution is that the 1986 “Top Gun” film led to a 500% increase in naval recruiting. But that figure has been debunked numerous times; instead, the film brought a large amount of public awareness to the Navy.

Following the original “Top Gun,” there was a bump in recruiting, but it was a much more modest 8%, according to a recent fact check from the Australian Associated Press.

Capt. Michael Brown, a senior recruiting officer in Washington, told The New York Times in 1986 that, while ”Top Gun” had caused recruiters ”to hear a lot fewer ‘noes,’ they still have to make the phone calls and wear out the shoe leather.”

Additionally, the Navy doesn’t conduct a survey that asks service members directly if they were influenced by any certain movie or television show.

Many of the examples of how the original “Top Gun” influenced recruiting are anecdotal like Capt. Brian Ferguson, a pilot who served as a technical adviser for the latest film.

The 28-year veteran of the Navy told The New York Post the film had a major influence on his career path and life.

“I don’t know if that figure is accurate, but I will tell you that it definitely had an effect on recruiting — if only one guy, which is me,” Ferguson told The New York Post. “I saw the movie, thought it looked like the most exciting job in the world. And it is.”

But in 2022, the Navy’s recruiting efforts are in dire straits.

The Navy began offering $25,000 enlistment bonuses to those willing to ship out in a matter of weeks and attributed the financial incentives to an “unprecedentedly competitive job market” brought on, in part, by the pandemic.

In an effort to make sure the ranks don’t drain, the Navy also made a series of policy changes aimed at decreasing the speed at which sailors leave the service, such as canceling early discharges and offering extensions.

Katherine L. Kuzminski, a senior fellow at the Center for a New American Security think tank who researches military culture and family issues, pointed out that recruiting may have seen a slight bump in the weeks following “Top Gun: Maverick.”

For many young Americans, the thinking has changed from what they can do for their country to what benefits can their country provide them.

“Even though we were kind of in the Cold War era in the ’80s, there was a clear view of who the enemy was,” Kuzminski said. “There was a combination of the kind of patriotism that the movie elicited, plus a clear threat. … Now, a lot of the recruiting messaging is targeted at, ‘You can get a VA loan and you can get the GI Bill and go to college.’ That this is a method of personal improvement.”

Recent public incidents, such as a string of suicides and a lack of basic amenities on the aircraft carrier USS George Washington, have also harmed retention and recruitment in 2022, similar to the Tailhook Scandal of the ’90s.

Experts say that the images of buff fighter pilots in the new film are being shown to an American public that is more mindful of the lack of attention and respect given toward women in the ranks.

Investigators into the 1991 Tailhook Scandal said the younger officers were heavily influenced by “Top Gun” and that it led to a party-like atmosphere among them.

Mentality,” an excerpt from the 1991 Tailhook Scandal investigation reads. “They expressed their belief that many young officers had been influenced by the image of naval aviators portrayed in the movie ‘Top Gun.'”

Kuzminski said the public backlash from the Tailhook Scandal ultimately set a course correction for the Navy, and those cultural changes can be seen in the new “Top Gun” film.

“I think that there have been quite a few changes in Navy culture since Tailhook that actually are indications of progress,” Kuzminski said. “And I do think this is where the film did a good service by including a female aviator with her role in the mission as opposed to her role as a love interest for one of the junior aviators.”

The Tailhook Scandal encouraged more women to speak up about sexual harassment and assault within the ranks.

The Navy officials did not respond when asked by Military.com how the service has worked to curb the “Top Gun” mentality in the ranks cited by Tailhook investigators and whether they are concerned that the new film could trigger the same culture again.

Instead, Cmdr. Dave Benham, a public affairs officer with Naval Recruiting Command, said that movies like “Top Gun” can play a helpful role in growing the service’s profile.

“We recognize the value of movies like ‘Top Gun: Maverick’ in raising awareness and interest in the U.S. Navy and Naval Aviation, and to recruiting and retention,” Benham told Military.com. “We continue to support such films at no cost to the taxpayer in an effort to lend realism and offer insight into the life of U.S. Navy Sailors.”

© Copyright 2022 Military.com. All rights reserved. This material may not be published, broadcast, rewritten or redistributed.

Ruben Randall - July 11, 2022 0
Money
Khloe Kardashian’s dating life has been making headlines ever since she ended her relationship with Tristan Thompson. Amid this, it looks like she...