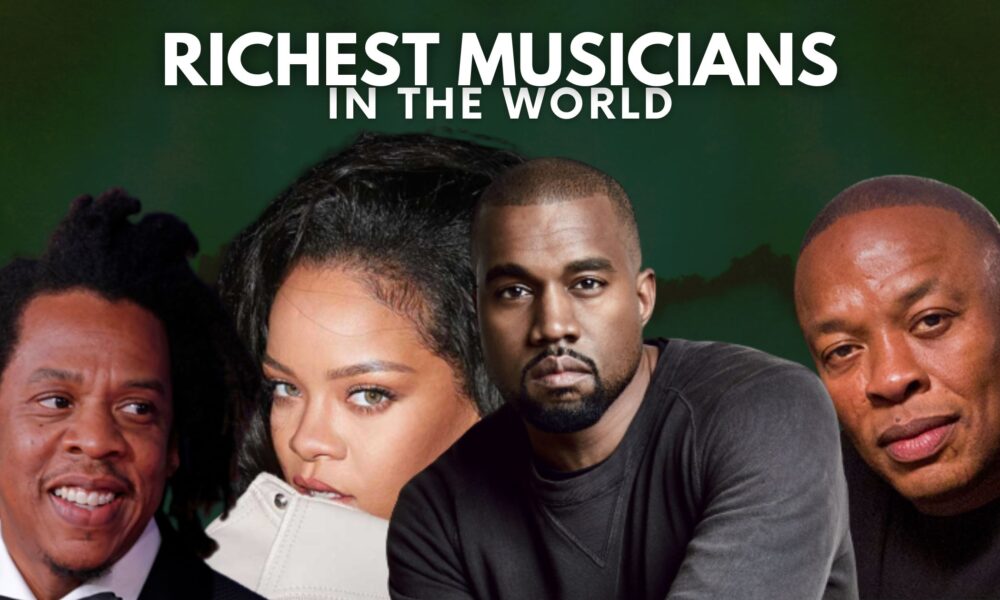 Now that the data for this year is in. Just keep in mind that these figures and fluctuations are estimates based on a variety of variables and publicly available records, but they have to be close!

No doubt, the world is blessed with a plethora of talented musicians; from hip hop music to RnB, to Afro-pop many artists in the music industry are selling records, getting endorsed by large organizations, selling show tickets, and making benjamin from their music.

The not-so-interesting thing is that many artists pay their dues but never break through to the public because of the hardship that is present. As a new artist reading this, you must be ready to learn essential marketing skills in addition to songwriting and playing an instrument if you want to make the top, just like the following what the top 10 richest musicians in the world have done.

Top 10 Richest Musicians in the World

The table below contains the names, net worth, age, and nationality of the top 10 richest musicians in the World.

In the beautiful world of music, especially hip hop, Kanye West is at the forefront. He is not just a music artist and rapper, Kanye West has a stronghold in fashion, screenwriting, and politics as well.

With over two dozen Grammy Awards won, Kanye West’s net worth is $1.8 billion. His lifestyle is worth reading about. Recently, he and his beautiful wife, Kim Kardashian separated and have been at loggerheads.

Rihanna is another sensation and occupies second place on the list of the top 10 richest musicians in the World. Recall that Forbes ranked her among the top ten highest-paid celebrities in 2012 and 2014.

As of now, Rihanna is the richest female musician in the world. However, a large chunk of her wealth does not come from her music from her cosmetics brand Fenty Beauty (an estimated $1.4 billion) and her lingerie brand Savage x Fenty (an estimated $270 million).

Over the 32 years, an old Barbarian singer has made a whole lot of money out of her makeup line, Fenty Beauty. It was said that in 2018 the line generated $570 million in sales, which had a tremendous impact on her net worth. 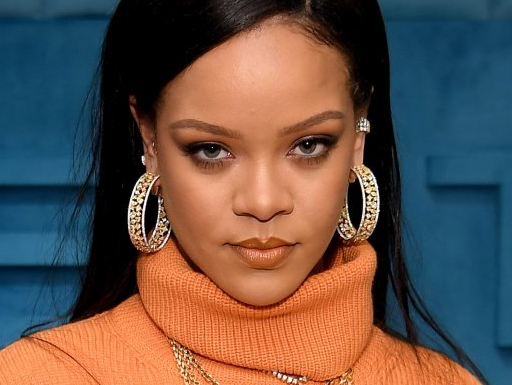 Rihanna is the Richest Female Singer in the World

Jay-Z remains a colossus in the world of music. He was born Shawn Corey Carter on December 4, 1969, in Brooklyn, New York. Jay-Z married a pop star like himself, Beyonce Knowles. His reputation and skillfulness as a rapper cannot be quantified.

He holds 19 Grammy awards to his name. And has sold over a hundred million records, and launched a flourishing record label Roc-A-Fella Records. Just in case you didn’t know, Jay-Z was once a Def Jam Recordings President; he is also a licensed agent for sports, working with his own sports company, Roc Nation Sports.

Although he holds more appraisal for being a global rapper, Jay Z is also known for being very good at investing and businesses generally. He has invested in various businesses over the past years, ranging from liquor, art, and even real estate. He is also among the top 10 richest musicians in the world. 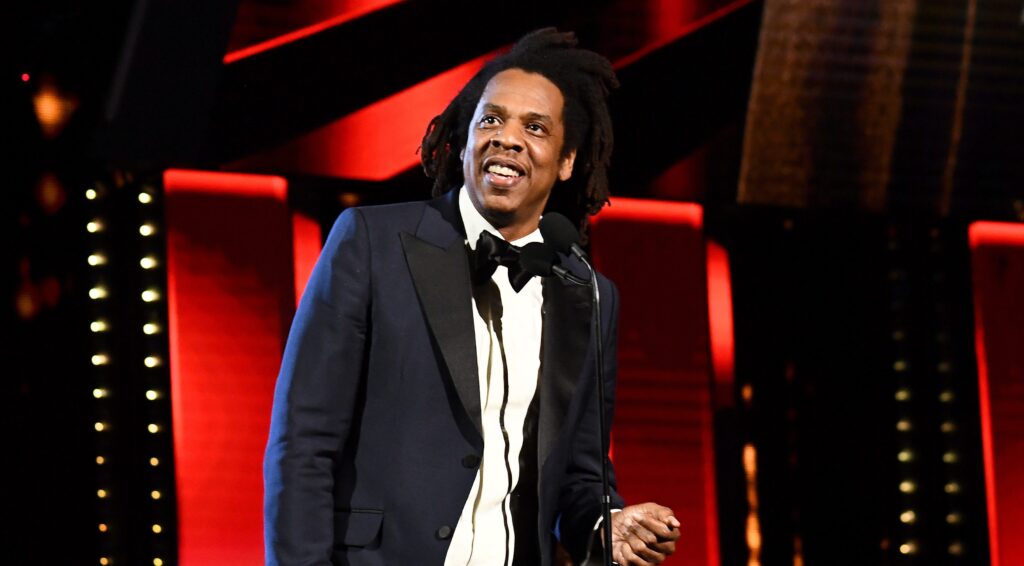 At the age of 6, Andrew Lloyd Webber started playing the piano, the violin, and the French horn. All of these showed that Andrew Lloyd Webber is no child in the music industry. Through diligence and commitment, he has remained on top and highly sought after amongst musicians. 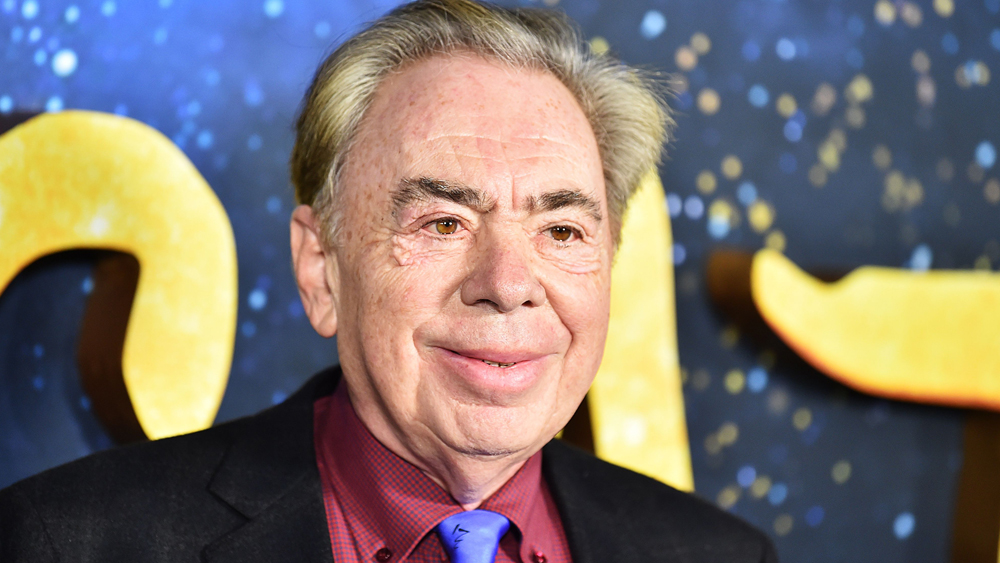 Sir Paul is a talented multi-instrumentalist, who has written or co-written a total of 32 songs which got to the number 1 peak on the Billboard Hot 100. And has earned him recognition twice in the Guinness book of records.

James Paul McCartney was born on the 18th of June, 1942 in Liverpool, England. In 1957, he worked with John Lennon’s group, known as the Quarrymen, as a co-writer in some of their songs. More so, he has also worked with other artists such as Michael Jackson, and Kanye West.

Paul is a talented multi-instrumentalist, he has written or co-written a total of 32 songs which got to the number 1 peak on the Billboard Hot 100, which has earned him recognition twice in the Guinness book of records. According to Wikipedia, as of 2020, he was one of the wealthiest musicians in the world, with an estimated fortune of £800 million. he is the fifth of the top 10 richest musicians in the world in 2022. 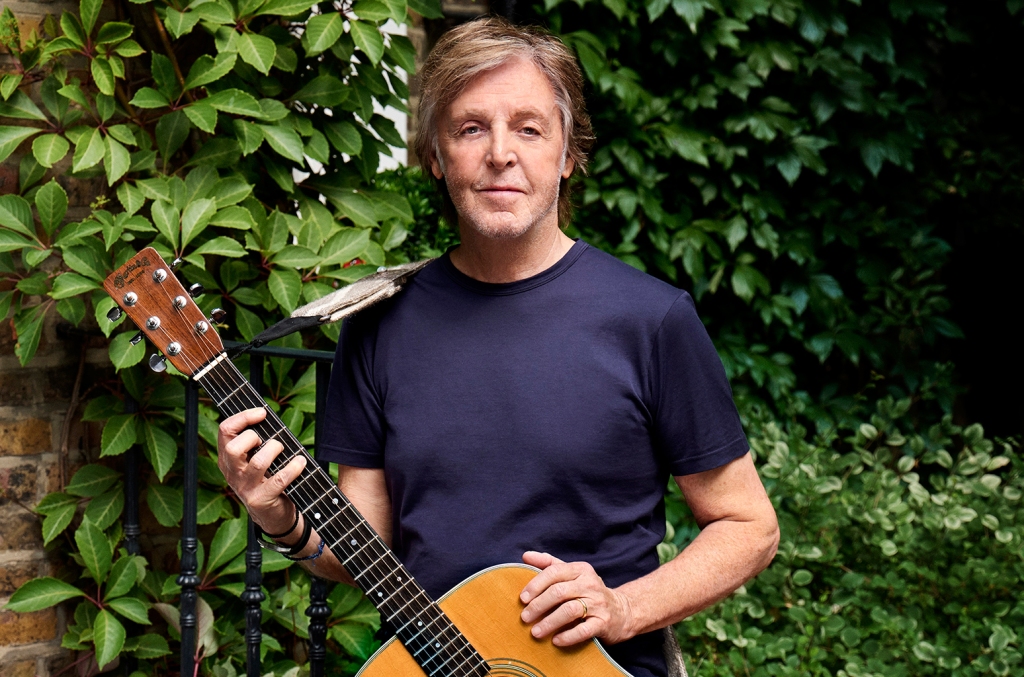 Another figure on the list of the top 10 richest musicians in the world is Puff Daddy. Born Sean John Combs on November 4, 1969. He is a New York-born rapper singer-songwriter and producer.

Puff Daddy or P-Diddy owns the record label Bad Boy Entertainment and is responsible for helping artists such as the Mase and the Notorious BIG start off their careers.

He gets a large chunk of his wealth from the music, and also from his Sean John clothing company, perfume company line, and a hit TV show on MTV.

In 2020, Diddy’s net worth is an estimated $855 million to $885 million, Aside from his money-making ventures, Diddy’s additional investments include the Capital Preparatory Harlem Charter School which “provides youth with lessons leadership and success.”

The astute rapper and men’s fashion designer is known for his very lavish lifestyle. From private jets to very expensive cars and lavish vacations, he is typically a symbol of wealth himself. 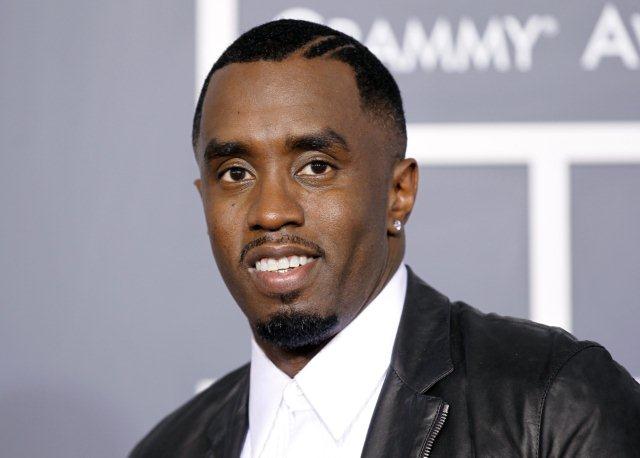 Herb Alpert is another notable figure in the top 10 richest musicians in the world. He is known over the world as the world’s most famous trumpeter. Herb Alpert, who was born on March 31, 1935, is still in high demand to play in shows and concerts, and believe me, he gets paid well for it.

Herb Alpert discovered his love of music at a young age and began studying to play the piano and trumpet. He has won numerous prizes, including the Grammy Lifetime Achievement Award in 2007.

He has nine luxury cars worth $4 million and four residences for $125 million. He has an estimated net wor870 million dollarsollars. He occupies the seventh position on the list of the top 10 richest musicians in the world with a net worth of $800 million. 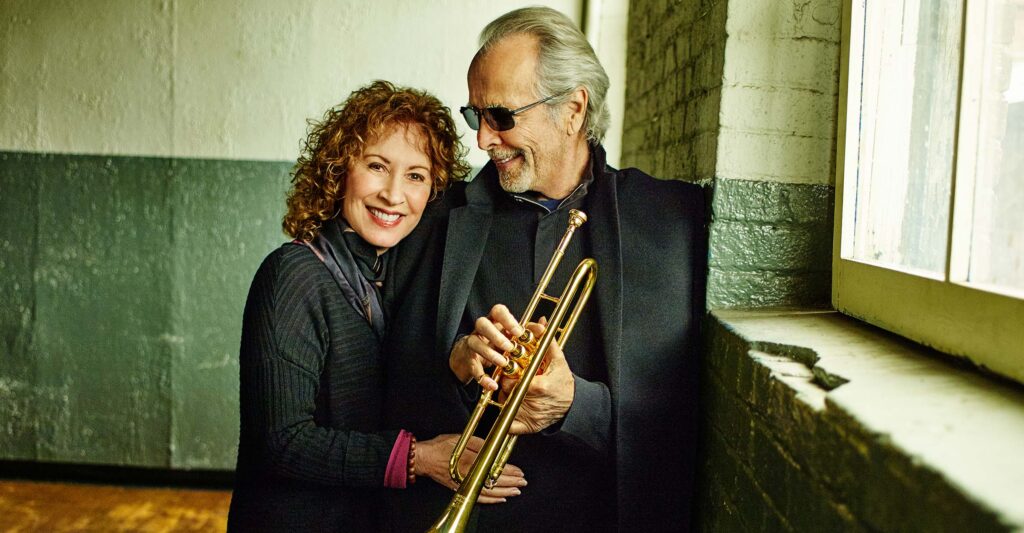 The strange thing is that you may not recognize Madona’s name, but you have undoubtedly heard her music in some form. She is widely known as the Queen of Pop. She was born on August 16, 1958, and she is still considered one of the best vocalists and songwriters in the United States.

Madonna is also a Golden Globe-winning actress, the proprietor of Maverick Records, the creator of a children’s book series, and the ownseveralber of health clubs. Without a doubt, Madonna has left an everlasting mark on the world of music, particularly as a woman. In 2022, she will be the seventh richest musician in the world, according to Forbes.

The talented artist has 11 cars including the BMW 7-Series, Audi A8, Mini Cooper S, Mayback 57, etc. cost about $5 Million. And sit on a net worth of $850 million. Madano is the eighth person on our list of the top 10 richest musicians in the world. 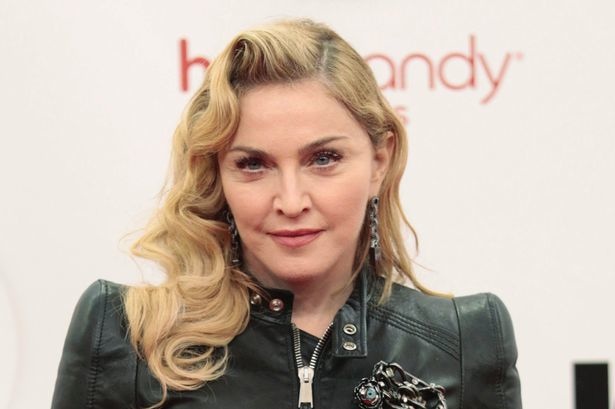 Dr. Dre, believe it or not, is another top-tier American rapper. Ander Romelle Young, better known as Dr. Dre, was born on February 18, 1965. He is an accomplished musician who can play a synthesizer, drum machine, sampler, and keyboard.

Dr. Dre is the founder and CEO of Beats Electronics and Aftermath Entertainment. He is also regarded as one of the most significant figures in hip development. hop’s In addition, in 2022, he was ranked eighth on Forbes’ list of the world’s top ten richest artists.

Furthermore, rumors claimed that he was responsible for establishing the careers of some well-known artists, including Eminem, Kendrick Lamar, Snoop Dogg, and 50 Cent. Dr. Dre, on the other hand, has only recorded two albums under his name. One of them was The Chronic, which sold 6 million copies worldwide.

So much has been said about his personality in the media these days but his legendary status cannot be denied. From being a member of the N.W.A to running his record label, he is a man that you cannot box. He even went as far as selling his headphone company to Apple for a whopping $3 billion. No wonder he is on this list of the top 10 richest musicians in the world. 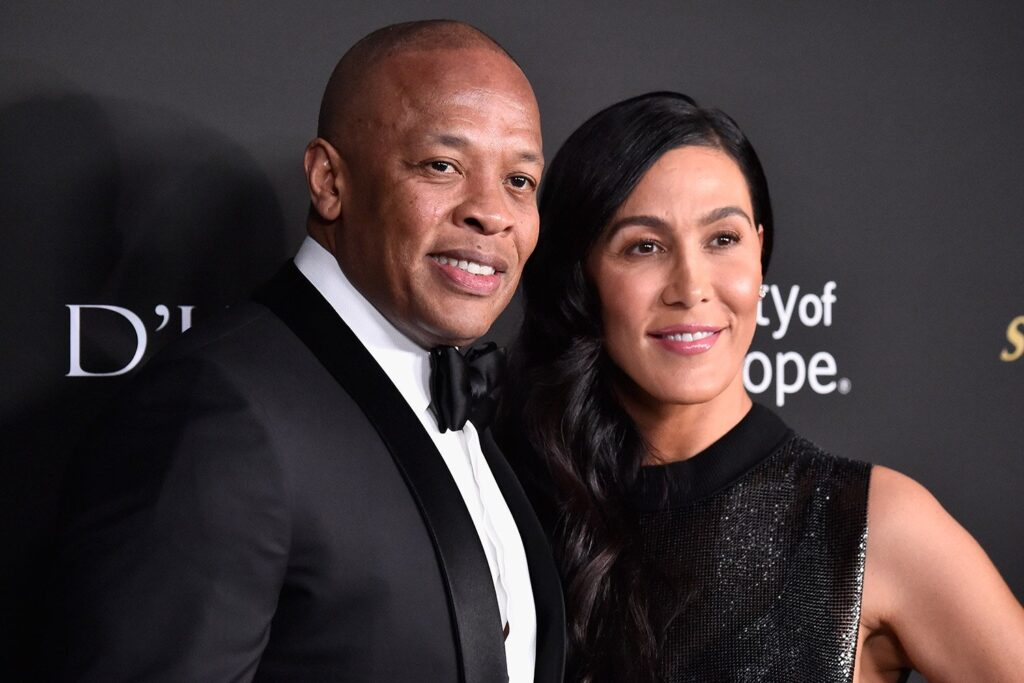 Last on the list of the top 10 richest musicians in the world is Celine Dion. She is a Canadian singer and best-selling artist in the country. Celine Dion was born on 30 March 1968.

She has successfully carved a niche for herself in the music industry and remains a popular household name. Her power and melodious voice have a way of capturing her audience and making them love listening to her over again.

Remember her powerful voice in the Titanic soundtrack? That was the song that took her to the spotlight internationally. She has released albums both in French language and English. She has also won numerous contests and awards. 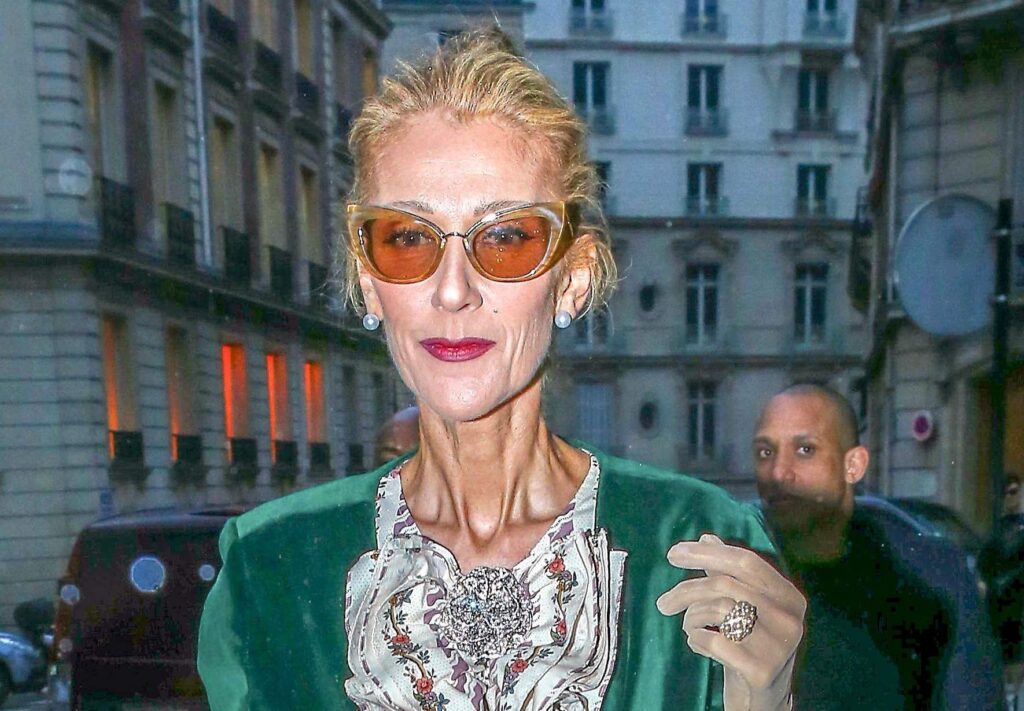 READ ALSO: Forbes Top 10 Richest People In The World In 2022

FAQs About The Top 10 Richest Musicians in the World

Below are some frequently asked questions about the top 10 richest musicians in the world.

Who Is The Number 1 Richest Musician In The World?

While Rihanna is the second richest musician in the whole world and also, the richest female singer in the world with an estimated net worth of  $1.7 billion. Both of them are veteran singers and business persons.

How Do The Top 10 Richest Musicians in the World Make Money?

It is challenging to estimate the average salary of working musicians due to the music industry’s dynamic environment. Of course, some artists receive significant financial payments, expensive automobiles, and opulent homes, but these musicians are independent and their incomes are less secure. Live performances and streaming revenue, plus investment frequently provide these musicians with a respectable life.

Without the aid of a record label, it is now simpler than ever to create, release, and record music. It appears that as streaming services gain popularity, the number of independent musicians who can make money will continue to rise.

A working musician should make an average of $35,300 per year from their music career plus additional income streams like endorsements and tours.

Who Are The Next Top 10 Richest Musicians In The World?

The truth is, there is nothing new under the sun; if Elon Musk can flip Jeff Bezos in a few months in 2020, then we should expect someone too to flip the tycoon on top of the list of the richest musicians in the world.

However, for newcomers to remove someone from the list of the top 10 richest musicians in the world, they’ll need to exert some tremendous force. Each of the business moguls mentioned above has a wide range of interests that go far beyond music. The younger generations need to increase their hustle now!

Top 10 Richest Musicians in the World

The table below contains the names, net worth, age, and nationality of the top 10 richest musicians in the World.

John Legend Net Worth (2022) From The Voice, Music, Concerts