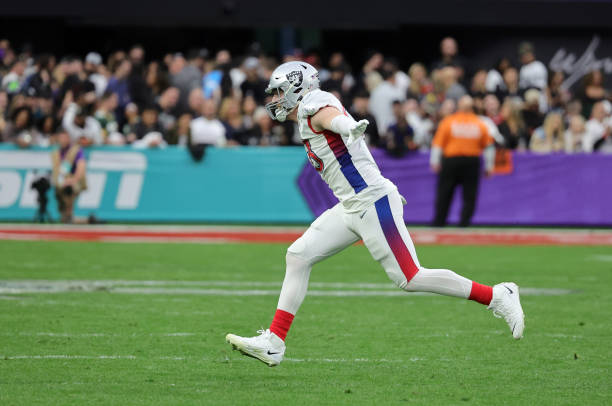 The offseason is long and full of terrors. The draft and free agency have come and gone, and on paper, the Las Vegas Raiders have improved dramatically. Two All-Pro veterans came to town, the front office was overhauled, and a long-sought-after play-caller took up the mantle of head coach.

For the first time since 2017, the Raiders look like bona fide playoff contenders. If they’re going to make a push, these are the 10 men that will play the biggest parts.

Kickers are people too, and the Raiders are fortunate to have two of, if not the, best kickers in the NFL. Daniel Carlson and A.J. Cole were silent but deadly during the 2021 playoff campaign, with Carlson’s leg not only sending Justin Herbert and the Los Angeles Chargers home early, but propelling Las Vegas into the postseason for the first time since 2016. Carlson’s 40 field goals made and 43 attempted kicks led the league in 2021, and he was nearly perfect from inside of 60 yards.

A.J. Cole also had a monster year, leading the NFL with a staggering 50 yards per punt, forcing a fumble and being named first-team All-Pro in the process. During a season when the Raiders had an average, but still upgraded, defensive squad, Cole ensured that opposing offenses never saw a short field.

Trevon Moehrig had a strong rookie campaign for the Raiders in 2021. He only had one interception, and there were certainly times where he let the ball slip through his fingers and it cost the team, but as far as his coverage was concerned, he didn’t let a whole lot happen. He started all 17 games for the Silver and Black and was only targeted 24 times. Of those 24 targets, only 14 were completed, for a grand total of 181 yards and two touchdowns. Getting Moehrig in the second round was highway robbery, and how he fits into a new defensive scheme will play a huge role in how a shaky secondary performs in a crucial season.

Kolton Miller still feels like the redheaded stepchild of the Raiders. He wasn’t the guy that many in Raider Nation wanted back when he was drafted, and some of those feelings have lingered. Despite that, he continues to be one of the rare constants in the franchise.

Miller is rarely beaten badly by pass rushers, hardly ever penalized, and most importantly, he doesn’t take snaps off. The Silver and Black’s left tackle doesn’t miss much action and does his very best to protect Derek Carr at all times. He was the PFWA first-team All-AFC tackle this season and continues to be one of the best players the Raiders have to offer.

Lost in the shuffle between acquiring hall of fame talents at edge rusher and wide receiver was the trade that saw cornerback Rock Ya-Sin arrive from the Indianapolis Colts. The Raiders have had mixed luck at the corner position over the years, missing on players like D.J. Hayden, Gareon Conley, and Damon Arnette in the first round of the draft but experiencing luck in free agency with players like Casey Hayward and fleeting glances at great play from Trayvon Mullen and Nate Hobbs.

Enter Rock Ya-Sin, a fourth-year corner who really started to come into his own last season with Indy. He cut his penalties down and really blossomed into a reliable player for the Colts (just ask their own beat writers). In an absolutely loaded AFC West, Ya-Sin will be asked to slow down the league’s best quarterbacks and, along with Mullen, Hobbs, and Moehrig, will ultimately decide the team’s defensive fate.

There are a few players I’ll absolutely pound the table for, but Hunter Renfrow will always be one of them. Renfrow is five-foot-10, 185 pounds, and basically ran a 4.6 at the combine. “Slot receiver” is not a label you usually slap on an elite player, and yet… No. 13 for the Raiders is someone opposing defensive coordinators need to key in on.

What he lacks in size and speed, he makes up for in football IQ, route running ability, and hands. When Ruggs was released, Waller went down, Bryan Edwards didn’t live up to the hype, and DeSean Jackson was a shadow of his former self, it was up to Renfrow to be “the guy” for the Raiders.

And “the guy” he was. Renfrow caught 103 passes for 1,038 yards and nine touchdowns last season. And it wasn’t just in the slot. Renfrow basically became the best player on the team, always embarrassing top corners like Marlon Humphrey, Kenny Moore II, and even Jalen Ramsey (who had a Twitter meltdown over it).

Renfrow benefits more than just about anyone else with the off-season additions the Raiders have made, especially considering it was head coach Josh McDaniels who turned Wes Welker from a special teamer to a star, basically reinventing the slot receiver as a position.

As content as Raider Nation was with Yannick Ngakoue as a pass rusher, there was no question that he had an effort issue and was a liability against the run. As much as he and Gus Bradley helped the Raiders, they were always due to improve, especially in a division that features Patrick Mahomes, Russell Wilson, and Justin Herbert. Enter Chandler Jones, a probable Hall of Fame edge rusher who has hit double digit sacks in seven of the last nine seasons, and whose 33 forced fumbles are currently the 11th most all-time.

A reliable run stopper in his own right, Jones has never had a pass-rushing partner like the one he has now, and he looks to be part-monster, part-teacher for the young Raiders rush, especially Malcolm Koonce, who will almost certainly see his role on the team develop.

Love him or hate him, Derek Carr is the engine that drives the Raiders. Last season, he proved that he doesn’t “need everything to be perfect” in order to win, as he was a crucial part in getting a makeshift Raiders squad into the post-season. Carr, a fringe top-ten quarterback in his sixth season as a head coach, hopes to extend his streak of 4,000-yard seasons to five in 2022.

Last season, Carr was tested. Early on in the year, his head coach/neighbor was exposed for making several inappropriate and offensive comments in emails, and he ultimately lost his job. Just as those wounds healed, the locker room was rocked again by the tragedy of his most dynamic wide receiver’s horrible mistake. Despite that, Carr faced the microphones every week and did his best to keep the Raiders in the playoff hunt.

Whether it was answering the tough questions or navigating four overtime wins, including one to send the Raiders into the post-season, the man most often compared to Kirk Cousins earned a lot of respect in 2021.

For that, Josh McDaniels and Dave Ziegler rewarded Carr twice, not just with a brand-new contract but with his dream offseason acquisition (still to come on this list). With his supporting cast, Carr is poised for the best season of his career… or else.

When healthy, there isn’t a better tight end in professional football than Darren Waller. The combination of size and speed is enough to make No. 83 one of the league’s most dynamic weapons, but when you pair that with his route running ability and soft hands, it’s no wonder why he’s Carr’s go-to target when he’s healthy. His contract status remains in doubt, but it feels like if he was going to be traded, it would’ve happened during the draft.

Waller had a disappointing 2021. With the tragic Henry Ruggs III situation, he was put in an unenviable situation as the team’s most legitimate big play threat. With some of the moves made this offseason, Waller should return to form. He’ll see more single coverage than he has in his time with the Raiders, which should only mean good things for the Silver and Black.

Maxx Crosby had an unbelievable 2021 season. On paper, he only registered eight sacks and didn’t force any fumbles this season, which might lead you to wonder why he was considered more valuable than Yannick Ngakoue, who, despite registering two more sacks and forcing two fumbles, was traded away during the offseason.

That’s because the stats don’t tell the story that the film does. He didn’t always get a sack, but opposing quarterbacks felt his presence. Crosby registered 42 pressures, 19 quarterback hits, and 13 hurries this season. Crosby shared a reel of some of his highlights, and you can bear witness to just how disruptive he was for the Raider rushers this season. Scarier than his sacks are all the times he completely blew up the play. He should only get better in year four, especially with the addition of Jones.

For the first time in many, many years, the Raiders have someone that is nearly universally agreed to be the best in the league at his position. Over the last two years, Davante Adams has averaged eight catches for 98 yards and a touchdown per game. Even when teams were putting three defenders on him, he was still taking over.

This can only be good news for the Raiders. Because while Adams is sure to get his targets and put up big numbers, it frees up everyone else on the offense. How can you be expected to put multiple defenders on one receiver with the depth of explosive weapons the Raiders field? Focus on Adams and it frees up Waller. If you take care of both of them, Renfrow will only have single-coverage.

The acquisition of Jones was big for the Silver and Black. However, it was the Adams trade that put the Raiders on the map. For the first time since he was at Fresno State, Carr has a bona fide number one wide receiver, and would ya look at that? It just so happens to be the same guy.

Ruben Randall - October 5, 2021 0
Actress
2021 has brought TV viewers a lot of heartbreak. Arrowverse fans suffered a setback earlier this year when The CW announced that it...