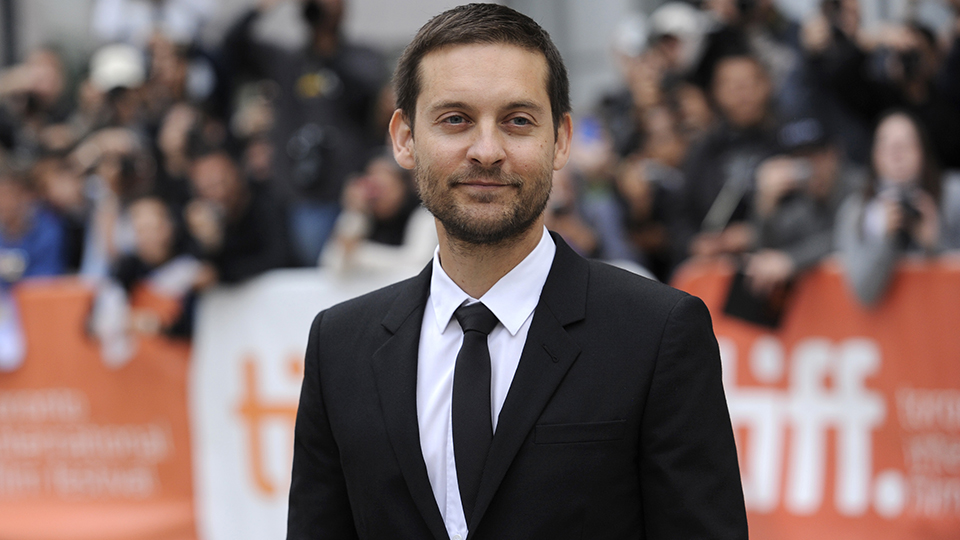 If you’ve watched every Spider-Man movie, you may want to know about Tobey Maguire’s net worth and how much he made as Peter Parker (a.k.a. Spider-Man) in comparison to Andrew Garfield and Tom Holland.

Maguire—whose full name is Tobias Vincent Maguire—was born in Santa Monica, California, on June 27, 1975. When Maguire, who had dreams of becoming a chef, was in the sixth grade, his mother offered him $100 to take a drama class instead of a home economics class he planned to enroll in. Maguire dropped out of high school in order to pursue acting. In 1989, he made his feature film debut in The Wizard. He continued to work as a child actor in projects like Walker, Texas Ranger, Roseanne and Tracey Takes On…

In 2000, Maguire was cast as Peter Parker/Spider-Man after beating out actors like Leonardo DiCaprio, Freddie Prinze Jr., Jude Law, Chris Klein, Wes Bentley and Heath Ledger. The role—for which Maguire starred in three Spider-Man movies—went on to become his breakout role and make Maguire tens of millions of dollars. In an interview with The Hollywood Reporter in 2019, Maguire revealed what he thought about Holland and Garfield as the Spider-Men that followed him. “What I’ve seen, I’ve appreciated. I like both of the actors a ton,” he said. “I think they’re both super talented. I would just say I appreciated them and I like the actors. I like the choices.” He also told THR at the time that he wouldn’t rule out playing another superhero.  “I just don’t really have an ‘I would or wouldn’t do’ mind-set. I’ll just do whatever … whatever it is that comes that I feel called to, that may or may not fit in any kind of box,” he said.

So what is Tobey Maguire’s net worth and how much has he made for the Spider-Man movies? Read on for what Maguire is worth and what his salary has looked like as Peter Parker/Spider-Man in comparison to Holland Garfield.

What did Tobey Maguire make for the Spider-Man movies?

According to Variety, Maguire wasn’t happy that the first Spider-Man’s producer, Laura Ziskin, made more than $30 million from the movie, while he was paid $4 million. He had his agency, The Gersh Agency, negotiate a deal for him to be paid $17.5 million for Spider-Man 2. However, the agency parted ways with Maguire soon after the deal was made. Variety also reported at the time that Maguire was almost fired by Columbia Pictures as Spider-Man due to his ill will toward Ziskin for what she made in the first Spider-Man movie. Variety also reported that Columbia Pictures didn’t think Maguire showed enough gratitude during the pre-production of Spider-Man 2, and that the actor had reported back problems, which he used as a threat as part of his negotiations.

According to Variety, Columbia Pictures told Maguire that they had decided to recast the role of Peter Parker/Spider-Man in Spider-Man 2 due to how much time and money his behavior had cost the film. The magazine reported that Columbia Pictures had made an offer to Jake Gyllenhaal—who was dating Maguire’s ex-girlfriend and Spider-Man co-star, Kirsten Dunst. (All three actors also had managers at Management 360.)

After Maguire was told that negotiations had started with Gyllenhaal, Maguire’s team worked to keep him as Spider-Man. Maguire agreed to take medical tests to prove that he was physically fit enough for Spider-Man, despite his past reports of back problems. In the end, The Gersh Agency was able to secure a deal for Maguire to continue to play Spider-Man for $17.5 million and five percent of five percent of the movie’s box office gross.

What did Tobey Maguire make for Spider-Man: No Way Home? 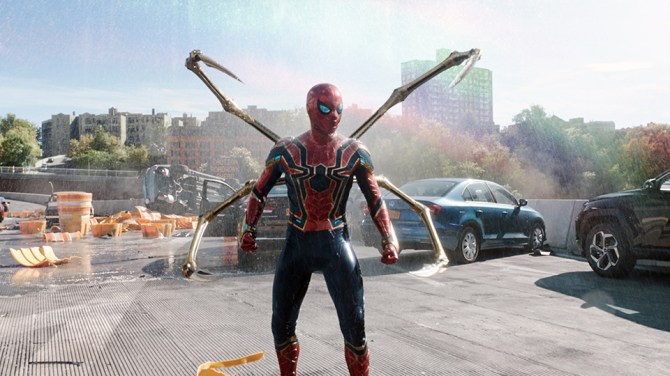 Maguire and Garfield’s versions of Peter Parker (a.k.a. Spider-Man)—who are in Tom Holland’s Spider-Verse after Doctor Strange’s spell to erase his identity misfires—come in the middle of Spider-Man: No Way Home when Ned (Jacob Batalon) uses Doctor Strange’s Sling Ring to find “Peter Parker.” The Sling Ring opens a portal to what looks like Spider-Man, but instead of Holland’s Peter, it’s Garfield’s version of the character. When Ned tries again, he opens a portal for Maguire’s Peter to arrive. Ned and MJ then take Maguire and Garfield’s Peters to meet Holland’s Peter, who is mourning the death of Aunt May after she was killed by the Green Goblin. Both Garfield and Maguire’s Peters tell Holland’s Peter about the loved ones they lost in their universe. Garfield tells Holland’s Peter about how he couldn’t save his girlfriend, Gwen Stacy (Emma Stone), while Maguire’s Peter tells him about the death of his Uncle Ben.

Motivated by his conversation with Maguire and Garfield’s Peters, Holland’s Peter concocts a plan to bait the villains from the other Spider-Verses—Electro (Jamie Foxx), Sandman (Thomas Haden Church), Green Goblin (Willem Dafoe), Lizard (Rhys Ifans) and Doctor Octopus (Alfred Molina)—to the Statue of Liberty, so he can cure them of their powers and what makes them evil before sending them back to their universes.

What is Tobey Maguire’s net worth? 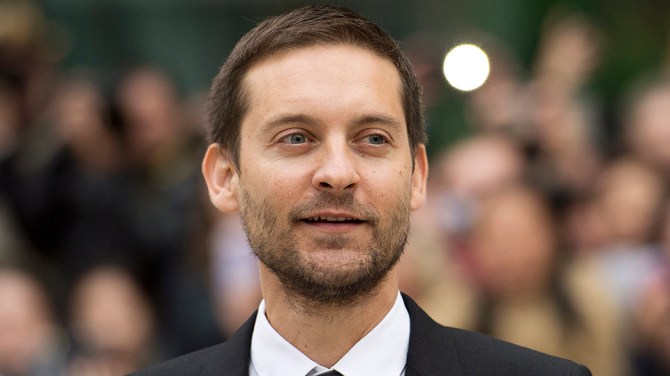 What is Tobey Maguire’s net worth? Maguire is worth $75 Million, which includes the money he made from the Spider-Man movies, as well as films like 2003’s Seabiscuit, for which he made $12.5 million, according to Celebrity Net Worth. Maguire also owns his own production company, Material Pictures. The site also reported that Maguire paid $6.9 million in 2019 for a 3,526-square-foot mansion in the Los Angeles neighborhood of Brentwood. He also sold a home in Santa Monica, California, for $3.25 million in 2017. The site also reports that he bought another Brentwood home for $13 million in 2016.

In an interview with The Independent in 2021, Kirsten Dunst, Maguire’s Spider-Man co-star, slammed the pay disparity on the set of the movies. “The pay disparity between me and Spider-Man was very extreme,” she said.. “I didn’t even think about it. I was just like, ‘Oh yeah, Tobey is playing Spider-Man.’ But you know who was on the cover of the second Spider-Man poster? Spider-Man and me.”

Maguire told The Guardian in 2016 that he always knew he’d be successful. “It’s so funny; I was in a meeting with a couple of people who’d experienced some unlikely success, like myself, and we were talking about how the odds weren’t great,” he said. “And that doesn’t faze me at all. It’s like Kennedy talking about us getting on the moon. Right? We actually didn’t know how to do that yet, but he just goes, ‘All right, before this decade is out, let’s get there. We’re going to do it.’ That’s sort of how I see things. Your imagination is not tethered to reality, or infrastructure, or statistics. What is any of that, anyway? I think our lives are a product of our imaginations.”

The Marvel Cinematic Universe movies are available to stream on Disney Plus. Here’s how to watch them for free.

For more about Spider-Man, check out Marvel’s special edition book, Spider-Man: From Amazing to Spectacular: The Definitive Comic Art Collection, which takes readers through 50 years of Spider-Man. The deluxe art book—which includes exclusive interviews and content from the writers and illustrators that brought the Marvel superhero to life half a century ago—follows Spider-Man’s history, from his first appearance in Amazing Fantasy #15 in 1962 to how he went from being Marvel’s chronic underdog to the amazing and spectacular superhero fans know today. The book—which also includes a deep dive into Spider-Man’s superpowers, including his spider-like strength, genius mind and webslingers (not to mention his “fully loaded arsenal of quips—Spider-Man: From Amazing to Spectacular also features never-before-seen art of the friendly neighborhood superhero, and behind-the-scene details from creators like Brian Michael Bendis, Gerry Conway and Tom DeFalco, as well as others who helped bring Peter Parker to life. Spider-Man: From Amazing to Spectacular is a must-read for any Marvel superfan.