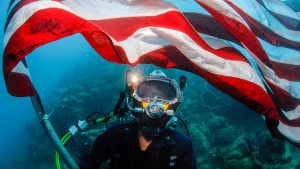 Currently available in theatres from director Chris
Woods and Abramorama is the story of lost and found with TO WHAT
REMAINS.

Project Recover is a small group of scientists,
oceanographers, archaeologists, historians, researchers, and military veterans
who are looking through our vast oceans to recover the remains of more than 80,000
military pilots missing since World War II.

Using underwater drones and scuba dives, this team
travels to beautiful waters to find the sadness of war. Keeping their job in
mind, they want to give closure to families and find answers to questions about
their missions. The project took many years and TO WHAT REMAINS is a look at
the new mission, their findings and bringing the boys home to waiting families.

Beginning with Dr. Pat Scannon, Founder, BentProp
Project and Co-Founder of Project Recover describing a plane found in the ocean
and how it looked and what they found. Lt. Col. Casey Doyle of the United
States Marine Corps. talks about his grandfather being shot down in September
of 1944. Then, in 2004, Dr. Scannon and the Prop crew found his grandfather’s,
Ssgt. Jimmie Doyle, plane and his remains were finally home.

Flip Colmer, Project Recover talks about how Dr.
Scannon is determined. US Navy SEAL, Ret. Marcus Luttrell speaks of Dr. Scannon’s
intensity going about the work he now finds so important. Knowing that failure
is something that may happen, Dr. Scannon says you learn to live with it, move
on and keep searching.

Lt. Doyle tells how his family never talked about his
grandfather and how his father grew up with the questions of ‘where is Ssgt.
Jimmie Doyle?’. Now, Lt. Doyle knew what he had to do to thank these men – be a
part of what they are doing.

Dr. Scannon became obsessed when finding a wing of a
plane knowing that if he could find this, he could find so much more. The
technology was not what we have today, and it was using eyes and machetes to
find these planes in remote locations. MIA (Missing in Action) pilot Lt.
Richard Houle is the projects next search and recover. Maps, details, data help
these men put their gear on and dive looking for the last known area. Lt. Houle
served on the same ship as former President George H.W. Bush.

After doing his research, Dr. Scannon looked to the
reunion of the combat pilots and discovers they have very sharp memories. Lt.
Cantrell of the Corsairs Squad is a man who shared that sharp memory. Twenty-year-old
young men in the most advanced planes on a landing field 100 yards from the
Japanese shooting at them. Taking Cantrell back to Palau, the former pilot
admits that he really only saw it all from the air.

That is when they put together the pieces of what
happened from not only the pilots but also of the people living in Palau. There
were many witnesses still alive to remember what they saw all those years ago.
On the dive they did not find a plane, but they did find a ship. It is all a
matter of checking off where to go next.

Marcus Luttrell knows what it is like to have men left
behind and wanting to go back and get them. He also had the opportunity to talk
a man named R.V. Burgin and with those who have served and got to know and
become friends with prior Marines. Telling their story about the battle on the Island
of Peleliu losing 6,000 men. After the battle, only 85 men survived a thirty-day
battle. Yet, these two men talk only of simple things and joys of life.

On another dive for Dr. Scannon, they again did not
find Lt. Houle’s plane, but they did find the plane of Lt. William Q. Punnell.
Nephew Dennis Kelvie could not believe it when he received a call about his
uncle’s remains. That is when the team experiences how MIA families finally
have the opportunity to grieve and celebrate the life of someone who had always
been a family’s mystery.

Dr. Scannon is looking for three UDT Navy Seals that
have been unaccounted for, and this search is on land. Luttrell is with them in
Palau in an area they believe through information given to them by village elders
who called the missing Seals ‘frogmen’. The painstaking work begins of going
through every inch of soil to find any remains.

The search for Lt. Houle is still on and the divers
continue to go down into the mirky waters. Instead, Walter Mintus, gone for
seven decades comes home and a community embraces their own.

Abramorama is the preeminent global theatrical distributions
and rights partner for many documentary and music films and is recognized for
the consistent high quality of its work on award winning features. Over the
course of 20 years, Abramorama has successfully distributed and marketed
hundreds of films including Ron Howard’s Grammy Award Winning THE BEATLES:
EIGHT DAYS A WEEK, Stanley Nelson’s MILES DAVIS: BIRTH OF THE COOL, as well as
Academy Award Nominee and IDA Best Documentary Winner THE LOOK OF SILENCE. For
more of what they have to offer please visit www.abramorama.com.

TO WHAT REMAINS is not only the story of Dr. Scannon’s
obsession with finding those who were lost in the war. It is also a documentary
of the families, friends and loved ones that were left behind. When a person is
laid to rest, there is a finality that becomes a part of life but when it is an
MIA, there is a constant nagging that accepting a loss is almost impossible.

The men and women who work with Dr. Scannon also know
how these families feel as a few of the volunteers have had their family
members found by Dr. Scannon. Taking many of the military men back to Palau and
Orange Beach, they re-live moments of their youth but also, like those servicemen
are found, they can close a chapter long lived in their lives.

That is amazing, heartbreaking, heartwarming and a
look at the life these men lived, the things they have seen, and the
friendships made from soldiers then and now.

In the end – their work is not done!