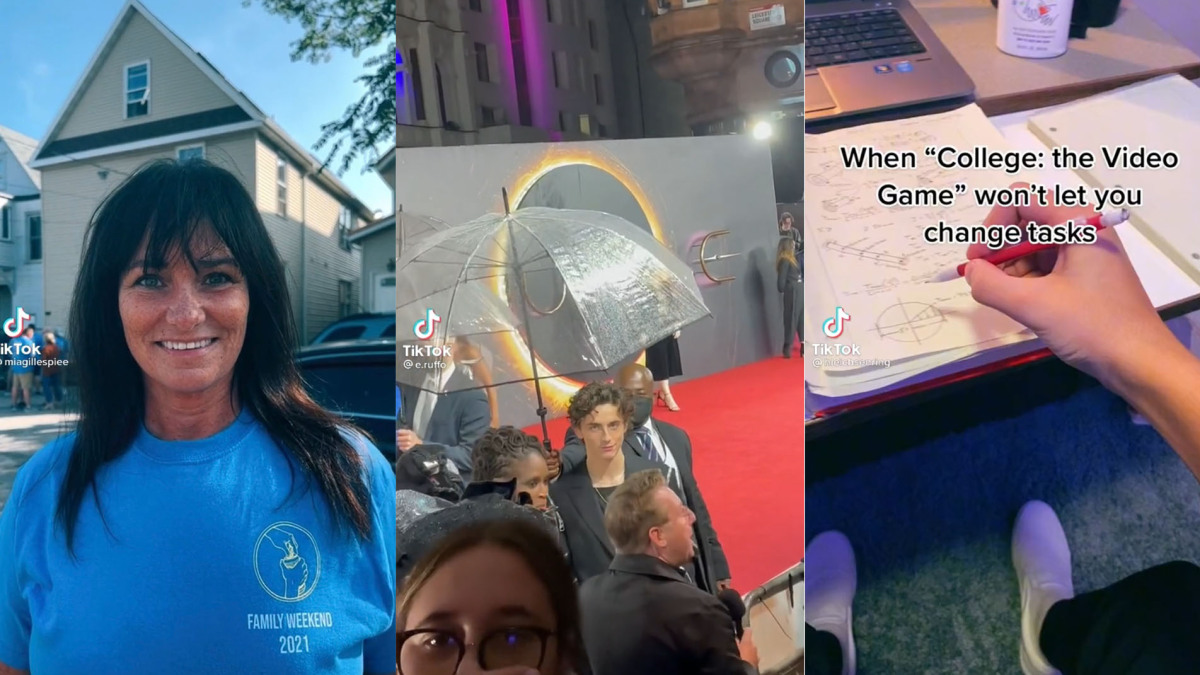 It’s been a week full of TikTok trend revivals and evolutions, but first we need to talk about that Timothée Chalamet video.

The Timothée Chalamet video in question

Dune has finally hit theaters, and with the sci-fi film’s release came an onslaught of Timothée Chalamet content. Now, Chalamet is typically all over my FYP, but between various press junkets and the star-studded London premiere, this was an unprecedented week for TimmyTok.

No video was as popular as the one TikTok user Emma Ruffo posted on Oct. 19. You’ve probably seen it. As of publish time, it has garnered over 11 million likes and over 40 million views. If you haven’t, do yourself a favor and watch it.

The video shows Chalamet waiting to be interviewed on the red carpet at Dune’s London premiere. He looks up, directly into the camera, in all his sharp-jawed, tousled-haired glory not once, but twice. It’s quite possibly the hottest video ever recorded. The clip is elevated by the audio choice: a mash-up of Adele’s “Rumour Has It” and Nelly Furtado’s “Maneater.” The “Maneater” needle drop is timed perfectly with Chalamet making sultry eye contact with the camera. Comments like “not me blushing over the phone” have over 165,000 likes.

I got Ruffo, the 20-year-old student who captured the sizzling video, on the phone to see what it was like to be on the receiving end of that smirk. “Honestly, I didn’t realize that he looked into my camera until later when I rewatched my videos. I saw that moment and was like, ‘What the hell is happening!’ It was a bit shocking for me,” said Ruffo.

“There were so many people and everyone was screaming and it was pouring rain. I was drenched and so focused on trying to film a video of him that I wasn’t that focused on the moment,” Ruffo continued.

Ruffo has been a fan of Chalamet since 2017’s Lady Bird and found the song used for the video by looking through the Timothée Chalamet hashtag on TikTok, which has more than 6 billion views. “It was the one I liked the most, and it happened to match the moment when he looks up perfectly,” said Ruffo.

Two videos I was hoping to never see again

Weirdly, two types of videos reappeared on my For You Page this week: the lip-synching moms and the Dutch politicians.

The matriarchs first went viral Oct. 10, 2020, with a video of them in a bar singing along to “Potential Breakup Song” by Aly & AJ. The clip has received over 12.5 million likes and 96 million views, and it gave thousands of TikTok users the opportunity to duet the moms and add their own colorful commentary about the five women. Users tried to guess everything about them, from what kind of gay son they would have to what masks they would wear.

They have since done a daughter reveal and a husband reveal. On the one year anniversary of the original video, the moms recreated it at what appears to be a frat house. The recreation currently has 11.4 million likes and nearly 60 million views. Like the original, it has spurred countless duets from other users, and the content is getting a little repetitive. The original videos were funny amid our collective struggle era in 2020, but now they just don’t hold up.

But the moms aren’t the only unlikely TikTok stars who resurfaced this week. An edit shipping two Dutch politicians is back on our FYPs. Yes, shipping politicians. Shipping, for the uninitiated, is when you want two people to be in a romantic relationship. Usually, people ship celebrities or fictional characters… not politicians.

So, where did the shipping start? Six months ago edits of two members of the Dutch House of Representatives, Rob Jetten and Jesse Klaver, went viral on TikTok. Users began to ship the two politicians under the couple name “Reese.” The account @ressepesants reposted an edit of Reese with the text “6 months ago this happened…” The video has since been heavily dueted on the app. One duet by @mapa.bird has accumulated over 1 million likes and almost 5 million views. In their video, @mapa.bird says, “Two Dutch politicians are in love, you can’t convince me otherwise.”

SEE ALSO: Mega commenters are the best part of TikTok

And their appeal has now transcended TikTok; on Archive of Our Own, a popular fan fiction site, there are currently 22 original fan works under the “Rob Jetten/Jesse Klaver” tag.

The whole thing is so absurd, and perhaps a necessary reminder that we should treat politicians as elected officials and not celebrities.

Life is still a video game

Not exactly a revival, but this new trend further explores the idea that life is a video game.

The first iteration of this trend debuted weeks ago. It was paired with the audio “I love this game,” pulled from an early 2000s Bratz ad. Essentially, people act out moments of their lives as if they are playing a video game. For example, one video posted by @autumn.brea53 uses the text “me clocking in to play smoothie shop simulator for 6 hours” and shows clips of her working in a smoothie shop.

On one level, it is somewhat uncomfortable to see people pretending their lives are a video game, but on another, it reminds me that so many of the internet games I played as a child were centered around capitalism. It freaks me out that I would sit around making pretend pizzas for pretend customers for hours on end. I am unnerved.

The new trend, however, is set to a sound called “Mud Flow ‘the Sense of me’ (Soundtrack Life is Strange).” The sound has nearly 70,000 videos. Users make videos of themselves walking around like video game characters and add commentary over the sound. Take this video posted by @hleichsenring that proclaims, “When ‘College: the Video Game’ won’t let you change tasks.” The video shows the user trying to stop working on a problem set but being stopped by the video game. They make additional commentary like “I think you should at least try the problem first” and “I don’t think that will help you study,” the same way a video game advises you while playing.

So instead of imagining life as a video game, we are now acting like video game characters living in a simulation. Cool. The commentary says “I think you should at least try the problem first.” Chegg is a website where you can find the solutions to math problems.

I’m also following along on @lamebaby47’s journey of doing healthy habits ironically. So I need you to know that I’m writing this week’s roundup ironically.

This Black-Owned Brand Is Behind An Official ‘SpongeBob’ Cap Collection