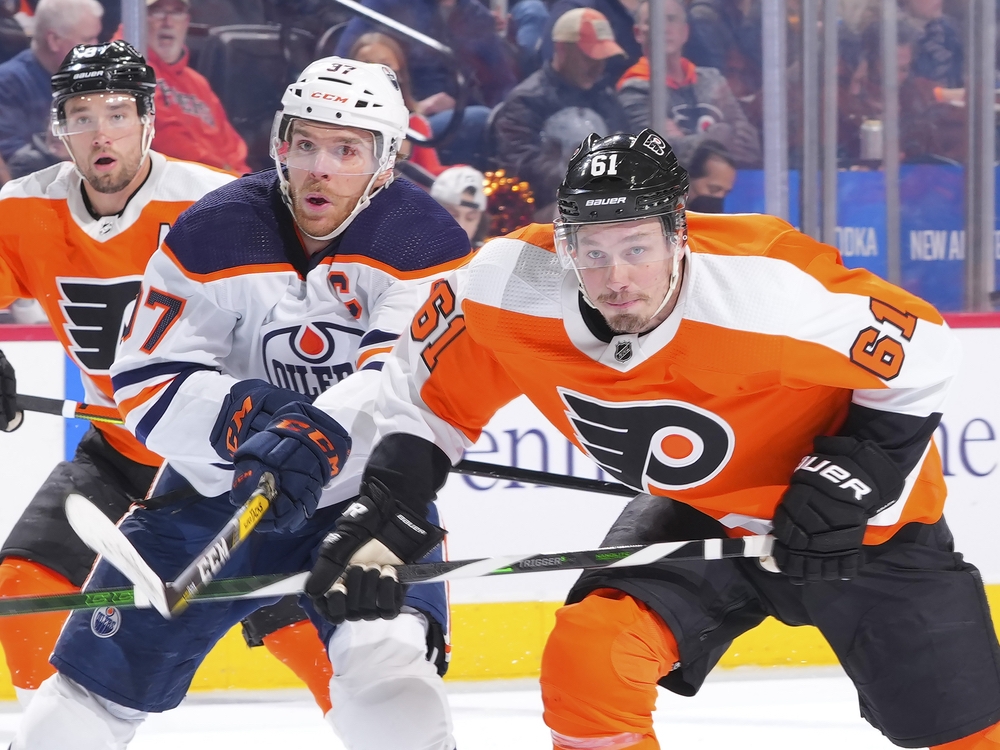 They’re still scuffling for a playoff spot in the Pacific, but they’re 9-5-1 in their last 15 behind Jay Woodcroft, and their five-on-five play has greatly improved

Author of the article: 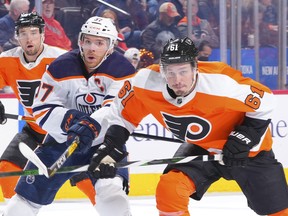 Justin Braun (61) of the Philadelphia Flyers and Connor McDavid (97) of the Edmonton Oilers skate after the puck at Wells Fargo Center on March 1, 2022, in Philadelphia. Photo by Mitchell Leff /Getty Images

If it’s true that an NHL general manager has to correctly read the temperature of his team with the trade deadline approaching — sickly or healthy, buyer or seller — then Ken Holland has to be in add mode now after the Edmonton Oilers’ strong rebound over the last three weeks.

They played two excellent games against Tampa, Saturday’s 4-1 win and a 5-3 loss there when they got out-goal-tended. A hard-fought one-goal loss in Carolina, a stand-out win over Florida behind Mikko Koskinen. A close game a week ago against a Calgary team that beats everybody. The win over Washington in a hugely entertaining game.

They’re still scuffling for a playoff spot in the Pacific, but they’re 9-5-1 in their last 15 behind Jay Woodcroft, and their five-on-five play has greatly improved.

So, Holland has to show his players he’s — if not all-in in terms of adding people because of having only $600,000 in cap space, with a dollar-in, dollar-out mentality — at least has the back of core guys such as Connor McDavid, who recorded his 36th multi-goal game Saturday, Leon Draisaitl and Darnell Nurse. He’ll be bringing somebody in over the next week. Probably an older defenceman, over 30 or close to it. Bigger body, shutdown type.

Come on down, Justin Braun, who has been in 100 playoff games. Or Marc Staal, who just played his 1,000th NHL game, or Seattle’s Carson Soucy. The first two are rentals. As many as five teams are in on the Flyers’ Braun, a right defenceman with a $1.8 million cap hit. Philadelphia wants a second-round pick but teams are holding firm on a third-rounder, at best. The Red Wings’ Staal, a left defenceman with a $2 million cap hit, has played 100 post-season games. He would be in the fourth-round category. Soucy, who plays left or right, has term this year and next at $2.75 million, so that’s a hockey trade.

With Kris Russell’s ongoing medical issues, where he’s only played 20 games, Holland needs another experienced guy on the back end, even if rookie Philip Broberg has looked very capable lately against Calgary, Tampa and Washington

Forget another goalie. Holland has looked at other goalies, considerably more because of Mike Smith’s struggles than Koskinen’s work, which has been uplifting. But Marc-Andre Fleury’s most likely not coming here as a rental. And Islanders goalie Semyon Varlamov, who has one year left at $5 million, has Edmonton on his no-trade list. He’s already added a top-six guy in winger Evander Kane for nothing, no assets going out the door. But he does need another veteran defenceman, because you can never have enough.

Again, because Holland has to show his team he’s in this with them, he said he would decide based on the standings and right now is team is trending up.

“We’ve spent a lot of time over the last three and half weeks on rounding out our five-on-five game defensively and we haven’t given up a lot despite the teams you’ve mentioned,” Woodcroft said of Tampa, Carolina, Calgary and Washington. “That’s a good sign because as you work your way down the stretch run and into a playoff round, that comes down to your five-on-five game. It’s a positive we’re dialling that in.

“I wouldn’t say it’s a recipe or a formula but we have a way we want to play the game. It’s the right way to play hockey, where you limit the other team’s chances. Against Tampa, Saturday, I thought we played a really mature third period against the Stanley Cup champions. It didn’t quite go according to script, there were some high drama moments (a five-on-three penalty-kill) but we found a way.”

Draisaitl, who did yeoman work on the five-on-three kill along with Nurse and Duncan Keith, knows the Oilers aren’t in the same stratosphere as Carolina, Florida and Tampa in terms of points, but they’re 1-1 against both the Panthers and Lightning this season. They’ve won two of three against Calgary. They’re 13-4, more importantly, against the Pacific Division teams.

“Those are the best teams in the league. We’ve played well against them the last couple of weeks. We are hurting a little bit right now (without Ryan Nugent-Hopkins or Jesse Puljujarvi) but it is going to help us a lot when those top guys are coming back. All-in-all, I think we are finding our gear here a little bit and taking steps in the right direction,” said Draisaitl.

He gets no argument from Woodcroft, who likes to keep the picture small and, as far as we know, isn’t one of those coaches who breaks down schedules into five-game segments.

“Our team is playing toward an identity that will help us be successful, long term,” said Woodcroft. “Does it mean we’re putting up wins every night or putting points in the bank every single night? I can’t guarantee that.

“But I know that if we play most nights the way we’ve played against Tampa, we’re going to set ourselves up for success.”

Holland likely has Josh Archibald in play for a trade, even off his energetic work against Tampa because he can only play games in Canada as an unvaccinated player. He isn’t trading his first-round pick in 2022 for a rental. He isn’t trading Broberg, for sure, or likely Markus Niemelainen on defence. Dmitry Samorukov could be a trade chip though. His 2021 first-round forward Xavier Bourgault has been hurt since the world juniors (possible hip injury) but he’s loathe to trade him because his pool of prospect forwards is a lot thinner than defencemen.

Certainly, winger Dylan Holloway is off-limits and probably Denver University’s Carter Savoie (20 goals in 34 games) too. He could be signing a pro contract after his sophomore season.

Sign up to receive daily headline news from Regina Leader-Post, a division of Postmedia Network Inc.

The next issue of Regina Leader Post Headline News will soon be in your inbox.