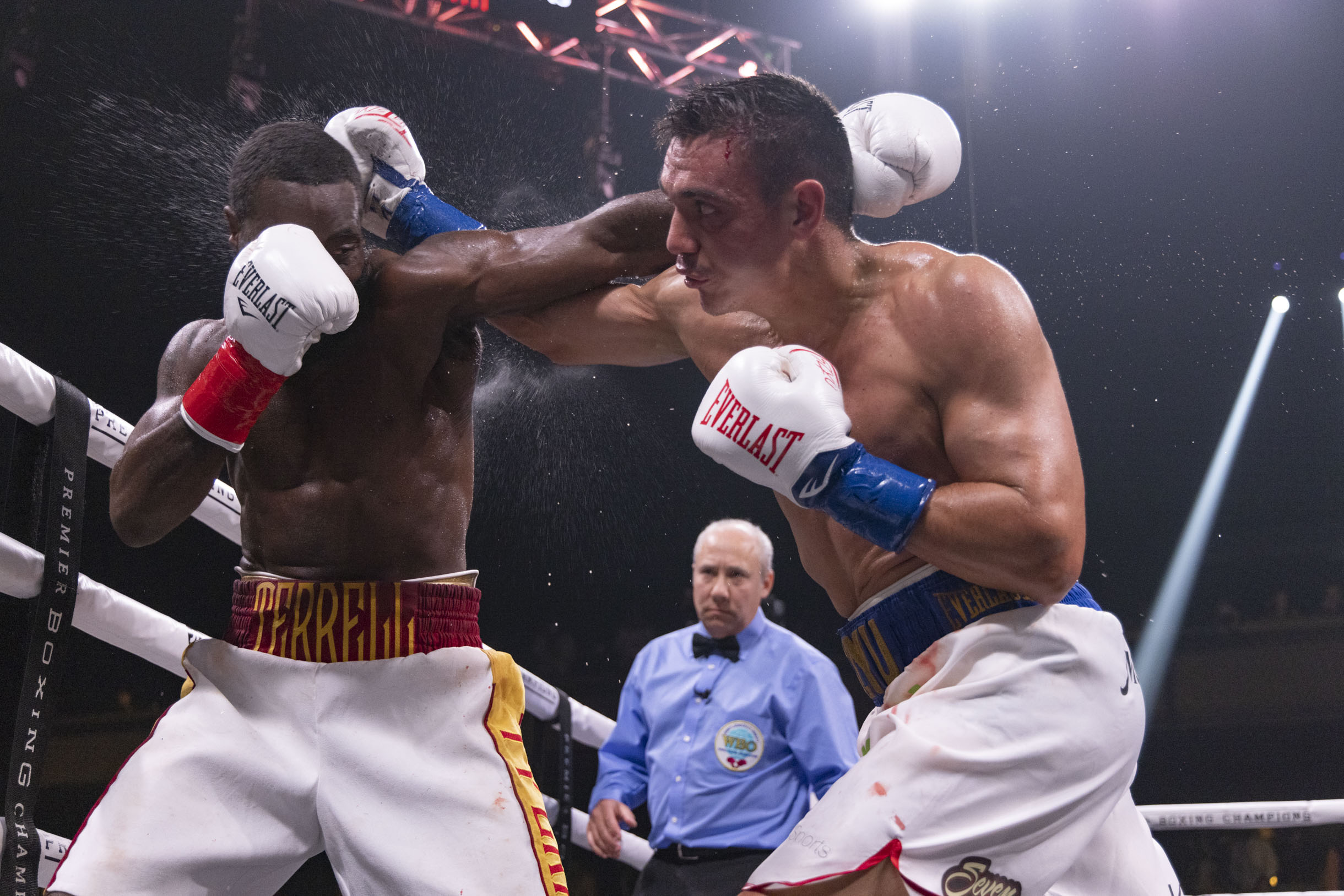 Tim Tszyu is trying his best to separate himself from his father, legendary Hall of Famer Kostya Tszyu.

On Saturday night, it was little tough to do. Tszyu had to get off the canvas in the first round to regroup, and then proceeded to show glimpses of the same desire and pressure his famous father used to exhibit in winning a 12-round unanimous decision over Terrell Gausha on a PBC event on SHOWTIME Championship Boxing from The Armory in Minneapolis, Minnesota.

“It was a simple flash knockdown. It was perfect timing. He’s a former Olympian. He’s got great credentials. That’s a great lesson for myself. I got back up and I dug deep.”

“It was a simple flash knockdown,” Tszyu said. “It was perfect timing. He’s a former Olympian. He’s got great credentials. That’s a great lesson for myself. I got back up and I dug deep. I was just enjoying myself. I felt in control the whole time. I kept the pressure on. I wasn’t going to back down. He kept landing shots but I said I’m going to keep coming forward and keep fighting.”

Tszyu also suffered a cut on his scalp a clash of heads in the first.

“I felt that I had him in trouble after the knockdown,” Gausha said. “I tried to jump on him but he’s a tough fighter. I take my hat off to him. He came prepared. I was ready for 12 hard rounds too.

“I think I got a little too excited and I tried to jump on him. But he was in shape so he recovered pretty good. He just pressed the action. That’s what he does. I knew he was going to come like that and we trained hard for that.”

Tszyu did show poise. He found a rhythm and attacked. The deciding portion of the fight came in the fifth, when Tszyu banged Gausha with a thudding right to the head.

“I was just enjoying myself,” he said. “I felt in control the whole time. I kept the pressure on. I wasn’t going to back down. He kept landing shots but I said I’m going to keep coming forward and keep fighting.

“I kept my composure but I just saying to myself this is a new round. I have to dig deep and I have to catch up here. I felt like I did that. I put the pressure on. I didn’t take one step backwards. I kept going on.

“I can improve on everything. Everything and anything. There’s a lot more to learn. I just have to keep going, keep training hard and keep improving. I have to keep fighting warriors like Terrell Gausha.”

Rivera controlled the fight from start to finish with his jab. Adorno tried coming on late, to no avail.

“That was four months of practicing in camp,” Rivera said. “I feel so good. I was looking for the knockout but that undefeated guy is tough. I know him. He’s a power-puncher but the aggression that ‘Ali’ has is too much.

“I have a good corner. A great trainer in Herman Caicedo and also Jukka Toivola. But I have talent and I made the sacrifice.

“Everybody now knows me. I say that I am the reincarnation of Muhammad Ali because I work so hard. I work so hard so the people are comparing me to Muhammad Ali. But yes, I’m definitely ready for a world title shot.

“I would have stopped him if he didn’t keep on moving. Every time I wanted to land a big right he kept moving out of the way. I thought later in the fight he would slow down and stand and trade, but he kept on moving.

“I want Tank (Gervonta Davis). He has my belt. I want what is mine. That’s the guy that I want next. After he beats Rolly (Romero), I’m ready to take my belt.

“I used my jab to great success tonight. You see how Muhammad Ali had a great jab? That’s what I used tonight to do what I had to do to win. I give this performance a great grade, an A.”

Adorno, apparently, saw a different fight than everyone else.

“What can I say? I thought it was a closer fight,” Adorno said. “I thought I won seven rounds. All he did was throw jabs! “What the judges didn’t take into account was my activity and productivity. If you look at the fight closely, you will see that I hit him more times than he hit me.

“Everybody thought I was gonna get KO’d in the first round, and I went 10 – toe-to-toe with him. I know the fans saw a closer fight, at least a draw.”

In the opening TV bout, southpaw junior welterweight Elvis Rodriguez (13-1-1, 12 KOs) put down Juan Velasco (23-3, 14 KOs) down three times in the seventh of a scheduled 10-rounder, when referee Gary Ritter stopped it at 2:49.

“I thought the fight was going to be over after I first knocked him down,” said Rodriguez, who won for the second time after losing to Kenneth Sims Jr. last May. “But he did surprise me because he came back in that round. I just covered myself well for the remainder of that round and tried to take him out. I knew that he was having trouble with his eye. I could see that he was cut on the left eye and was also bleeding from his nose.

“I’m ready for anybody at 140 pounds. Gervonta Davis, Rolly Romero, whoever. I’m ready and prepared.

“I knew that Velasco would come out swinging because he had the edge in experience as well. However, his stamina kept dropping as my shots kept getting stronger.

“Velasco was dangerous throughout, and at one point he was looking for his lucky punch. I waited until he tired out and then took advantage of my opportunity.

“I want to fight the biggest names, the marquee ones. The 140-pound division is lit and I’ll be ready for whichever contender comes next.”

Joseph Santoliquito is an award-winning sportswriter who has been working for Ring Magazine/RingTV.com since October 1997 and is the president of the Boxing Writers Association of America. He can be followed on twitter @JSantoliquito.