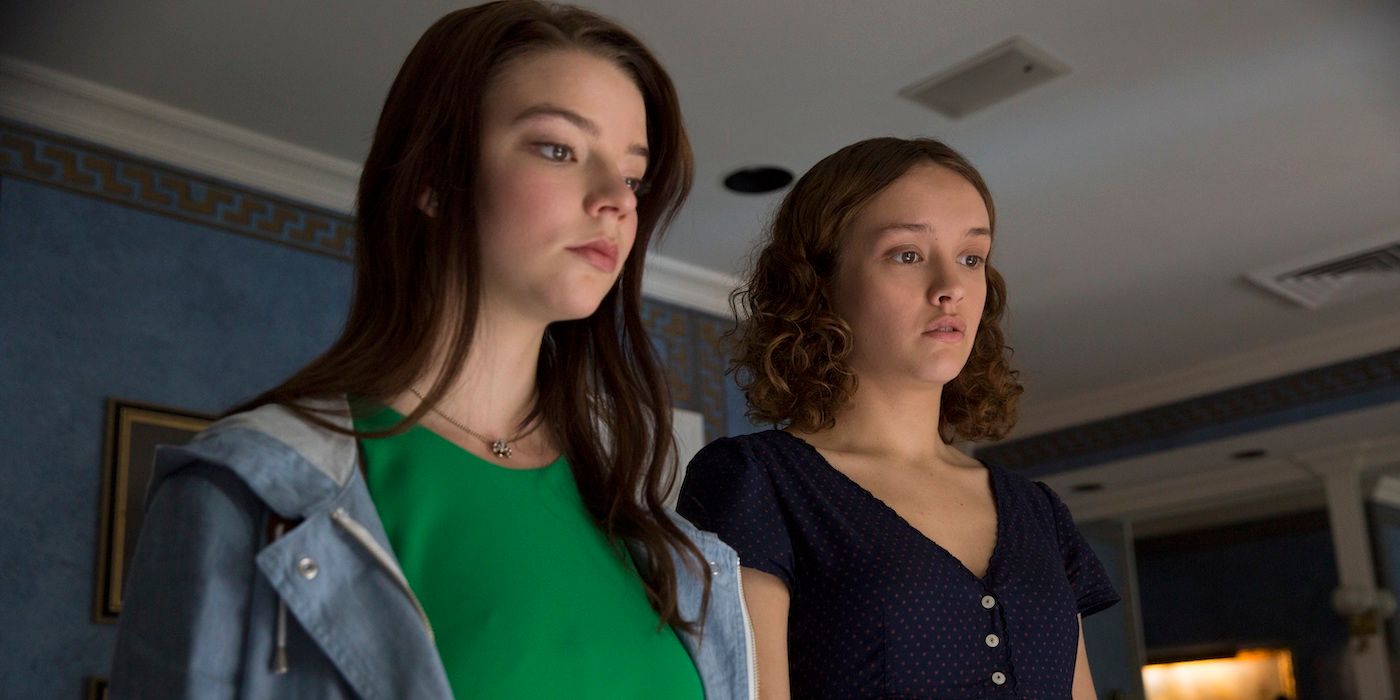 Before they were Beth Harmon in The Queen’s Gambit and Alicent Hightower in House of the Dragon, the talented Anya Taylor-Joy and Olivia Cooke teamed up in the dark comedy thriller Thoroughbreds. Written and directed by Cory Finley, this 2017 film follows upper-crust Connecticut teens Lily (Taylor-Joy) and Amanda (Cooke) as they rekindle their friendship and plot to kill Lily’s stepfather Mark (Paul Sparks). Watching the actresses, who are not international stars, in a lower-budget film before they stepped into some of their most notable roles is a reminder of their longstanding talen their talent and a hint at their future success.

Who Are Anya Taylor-Joy and Olivia Cooke?

Anya Taylor-Joy is an actress that’s hard to avoid these days. After her breakthrough role in Robert Eggers’ The Witch in 2015, she went on to star in Split, Last Night in Soho, the latest adaptation of Emma, and in a supporting role in Peaky Blinders. If you weren’t familiar with her before 2020, her role as chess player Beth Harmon in Netflix’s The Queen’s Gambit skyrocketed her into global fame. Last year alone, she starred in Amsterdam, Eggers’ third film The Northman, and The Menu, for which she was nominated for a Golden Globe. She will voice Princess Peach in the upcoming Super Mario Bros. Movie and will play Furiosa in the eponymous spinoff/prequel to Mad Max: Fury Road coming in 2024.

Olivia Cooke’s rise to international acclaim in one of the most-watched shows of 2022 has been a long time coming. She has been delivering impressive performances since one of her earliest roles in Bates Motel. Before her role as Queen Alicent Hightower in House of the Dragon, Cooke starred in Me and Earl and the Dying Girl, Ready Player One, Slow Horses, and the Academy Award-winning Sound of Metal.

What Is ‘Thoroughbreds’ About?

Suburban teen Amanda (Cooke) is stuck at home while she awaits trial for animal cruelty after using a knife to euthanize her incapacitated horse when it was clear he would never walk again. Understandably ostracized from her community, Amanda’s mother pays her former best friend Lily (Taylor-Joy) to hang out with her under the guise of a tutoring session. It’s rather awkward at first. The girls grew apart after the death of Lily’s father, but soon Amanda reveals that she does not experience any emotions due to an unnamed mental disorder, and they start to rekindle their friendship. Lily continues to spend time with Amanda of her own accord, as she too has been experiencing isolation at home after being expelled from a prestigious boarding school for plagiarism, forced to cohabitate with her cold-blooded stepfather Mark. Lily and Mark try to remain cordial but Amanda senses the tension between them quite quickly, and one night suggests to Lily that she consider killing him. This disturbs Lily at first, but when she finds out Mark has enrolled her in a boarding school for girls with severe behavioral issues, she and Amanda devise a plan to kill him without getting caught.

At first, Lily suggests Amanda do it herself seeing as she would have no feelings of guilt, but Amanda reminds her that her pending animal cruelty charges would make her an immediate suspect. At a house party one night, Lily comes across drug dealer and convicted sex offender Tim (Anton Yelchin), and her and Amanda try to blackmail him into killing Mark, but the plan quickly falls apart. Still desperate for revenge against her stepfather, Lily drugs Amanda with Rohypnol while they watch a movie at her house, planning to kill Mark herself and frame Amanda for the crime. Lily’s conscience catches up with her, and she reveals her true intentions, but Amanda finishes the drink anyway, allowing Lily to carry out the murder and let Amanda take the fall.

‘Thoroughbreds’ Works as a Character Study

Thoroughbreds is a compelling thriller, but it works best as a character study of Amanda and Lily, two socially isolated teenage girls who rekindle a friendship based on mutual fascination. At first, viewers may feel just as put off by Amanda as Lily is, but once she learns of Amanda’s lack of emotions, she feels comfortable opening up, and saying exactly what she thinks without fear of judgment or hurting Amanda’s feelings. Lily is presented as the more sympathetic character compared to the stoic Amanda, but they experience a sort of role reversal by the end of the film. When Amanda does some digging and discovers Lily lied about finishing her semester early and was actually expelled from her boarding school, Lily’s polished facade begins to crumble. Once the idea of killing Mark is planted in her head, Lily becomes determined to see it through, realizing her future is at stake and not caring if she ruins Amanda’s life in the process.

Lily is Amanda’s only friend, a fact Lily is well aware of and uses to her advantage. Amanda lacks emotions and has a twisted sense of morality, as she is only willing to help Lily kill her stepfather if it’s the right thing to do. She doesn’t have the same regard for human life as a typical person would, and sees no issue with killing someone if they’re a bad person. Lily is somewhat repulsed by her at first, but as the girls spend more time together it seems like they are forming a genuine friendship, until the third act when Lily’s true intentions come to light.

While Amanda knows exactly what kind of person she is and understands why people are so disturbed by her, Lily has an innocent, wide-eyed exterior that masks her inherent selfishness and manipulative behavior. After Amanda starts drinking her spiked beverage, Lily questions Amanda about whether there is any point in her life considering she cannot feel anything. It’s a seemingly innocuous question, but once it’s revealed her intention was to use Amanda to take the fall for Mark’s murder, the build-up to this reveal is very telling of Lily’s true character. She planted the idea of her life being completely meaningless in Amanda’s head before coming clean about drugging her, but Amanda finishes the drink anyway. As unfeeling as she may be, Lily knows Amanda cares about her as her only friend, and her admitting to drugging her after suggesting her life is pointless could have simply been a manipulation tactic to ensure Amanda willingly takes the fall for her, so she doesn’t have to live with the guilt of betraying her best friend.

The evolution of Lily and Amanda’s relationship is fascinating to watch, as the emotionless Amanda appears to soften as she and Lily grow closer, while Lily’s seemingly good intentions were just the facade of a spoiled girl using a person whose life she views as expendable for her personal gain. As much as we are supposed to hate her stepfather, there is a scene where Mark confronts Lily about her selfishness, “In your brain, all these people are just little offshoots of your consciousness. We’re all your maids aren’t we?” Lily is infuriated, but even Amanda agrees that Lily lacks empathy. It’s this selfishness that drives her to stab Mark to death and frame Amanda, but we see a glimpse of the guilt and horror at what she’s just done as she places her head on Amanda’s lap, wrapping her arm around her as she sobs, covered in Mark’s blood.

Why Anya Taylor-Joy and Olivia Cooke Work So Well Together

Taylor-Joy and Cooke work together beautifully, maintaining the sense of tension ever present in the film while also leaning into the darkly comedic moments. Cooke’s performance as the emotionless Amanda is particularly impressive, especially in how she pulls off the blank, thousand-yard stare that defines her character. Her performances in Earl and the Dying Girl, House of the Dragon, Sound of Metal, and really any project she’s starred in, are proof of how expressive Cooke is with her eyes, bringing a particular emotional depth to each of her characters. But in Thoroughbreds, there really appears to be nothing behind her eyes, and the only time we see any emotion is when she realizes Lily has betrayed her. It may have been the Rohypnol she chugged, but when Amanda decides to sacrifice herself for Lily before she falls unconscious, she gives Lily a look of utter vulnerability and sadness, showing that in some part of her, she really does care about Lily.

As exemplified in The Queen’s Gambit and The Northman, Taylor-Joy has a face that demands to be looked at, and she does an excellent job of portraying Lily’s innocent yet snobby personality. She and Cooke are the film’s main focus, but the tension between her and Sparks makes the scenes with Lily and her stepfather just as compelling. One of the film’s final scenes where Lily cries in Amanda’s lap is the most memorable image of the film, carried by Taylor-Joy’s performance. One can only hope she and Cooke will reunite in a future project, but fans of either or both of these talented actresses should give this underrated psychological thriller a chance, which notably also features Anton Yelchin’s final performance.