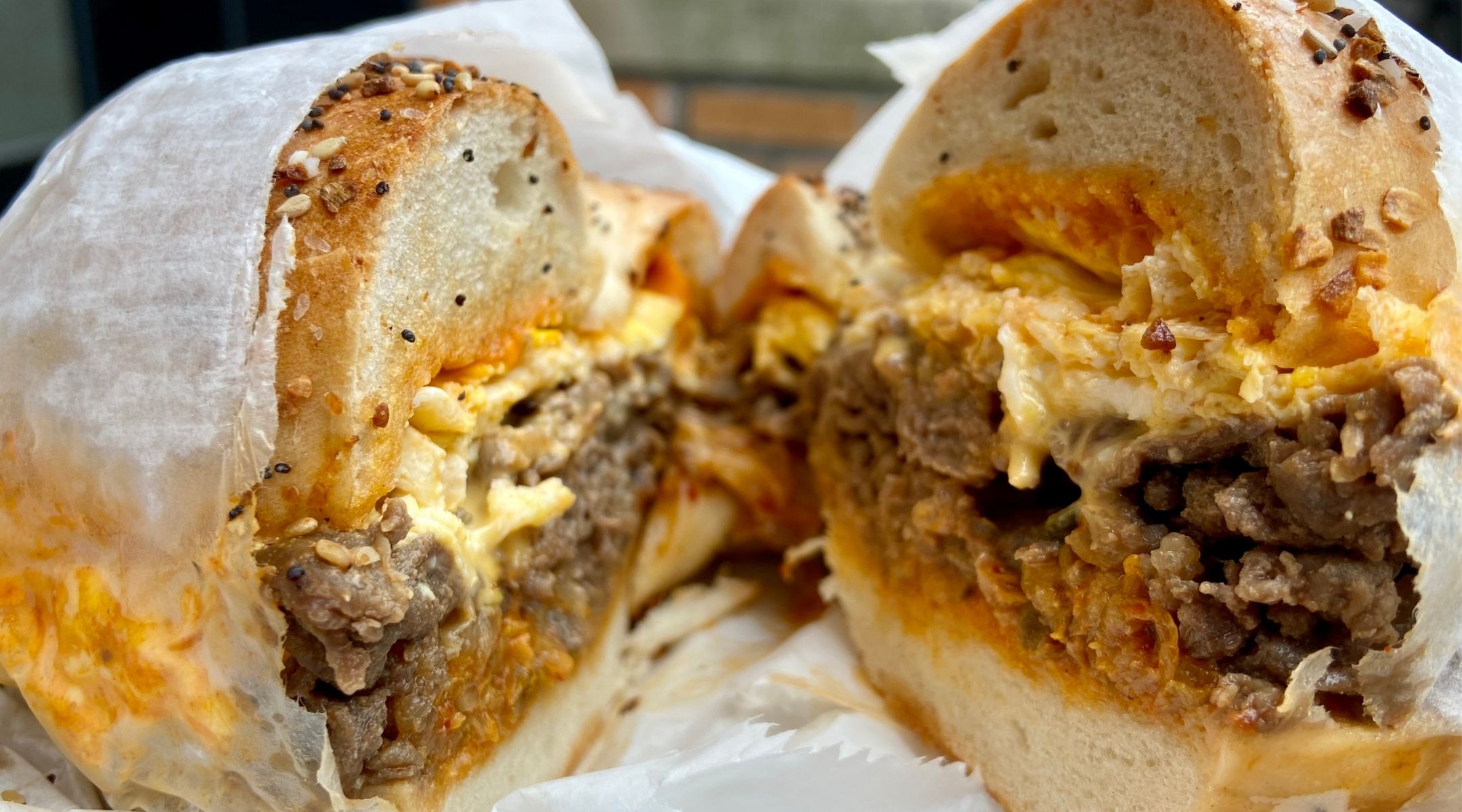 (New York Jewish Week) — In a small shop located along a busy stretch of 30th Avenue in Astoria, Queens, a jeweler-turned-restaurateur is serving up a unique combination: Korean-inspired sandwiches served on the essential New York Jewish carbohydrate that is the bagel.

When Ben Suh opened Between the Bagel three years ago, he didn’t set out to create Korean Jewish fusion cuisine. At first, he made and sold all all the things you’d expect at a bagel shop: fresh bagels, schmear, smoked fish — all of which are still on the menu. But, in recent months, his shop has garnered increasing buzz over its fusion sandwiches like Seoul Meets Bagel, or SMB: a bagel topped with beef bulgogi (marinated and grilled beef), egg, cheese, kimchi and spicy gochujang mayo.

“Those sandwiches happened over a year and a half into the business,” Suh told the New York Jewish Week. “I put bulgogi on one of my egg sandwiches for breakfast. Then I added kimchi and the mayo, and that’s how it was developed.”

His bagels have turned the shop into a social media sensation. Between the Bagel gained hundreds of new customers from a local Astoria page on Discord, as well as numerous posts on Reddit. Instagram influencers also flocked to the shop, including local pages such as @WeHeartAstoria and @GiveMeAstoria, and larger ones, such as @FoodBabyNY, which has over 300,000 followers.

“It’s still surprising to me seeing the amount of publicity I’m getting,” Suh said.

He said the fusion of these two tasty cuisines is symbolic of New York City’s diversity — and that of Astoria, in particular, which he describes as “a smorgasbord of culture.”

“With the SMB, it’s bringing Jewish culture with Korean culture, plus American and New York culture,” he said.

Another sandwich combines the Jewish bagel with spicy Korean pork, jalapenos, kimchi and mozzarella. Suh noted that while pork on a bagel might sound like a culture clash, it’s no different from bacon on a breakfast sandwich — a common sight in bagel shops across the city.

“Is it blasphemous?” Suh said. “Possibly. But I just felt like putting my own spin on it.”

Suh, 43, was born in Los Angeles but moved to New York in 2006 to work as a luxury jewelry product developer — an experience he said taught him how to workshop new food products, as unlikely as that may sound.

“I saw how they developed a piece of jewelry,” he said. “I brought that aspect into bagels and started doing the same thing. You change something 10 different ways and see which way works the best.”

Our nonprofit newsroom depends on readers like you. Make a donation now to support independent Jewish journalism in New York.

While he’s not a trained chef, Suh said he always loved food from a young age, and particularly enjoyed trying all types of restaurants.

Suh is grateful for the buzz his bagels are getting — especially because he first opened his shop in March 2019, just weeks before COVID-19 shuttered restaurants across the city and altered the world.

“In the beginning, there was a day we had zero customers,” Suh said.

During the height of the pandemic, when President Donald Trump and some of his followers referred to the coronavirus as the “China virus” or “kung flu,” Suh said he was sometimes threatened just because he looked a certain way.

“People walked into the restaurant, put down their bags and coats to get ready to order, and then they would see me, and curse me out,” Suh said. “It was concerning .”

And yet, Suh is known in the neighborhood to be a friendly business owner who engages with every person who walks through the door. During an interview with the New York Jewish Week, a regular walked into the store and Suh greeted her, saying “Hey, Grandma.”

He also declined to have his picture taken for the article, saying that he wanted it to be “all about the food.”

Eli Goldman, the Jewish owner and chef of Astoria-based Tikkun BBQ, told the New York Jewish Week that Suh is “incredibly generous and super humble, maybe to a fault.”

“He’s the type of dude who’d lay down in front of a car for you,” Goldman said. “Food is art and open to interpretation, and I love his interpretation.”

Goldman added that Suh is helping to show that a traditional Jewish food like a bagel can be “so much more than cream cheese and smoked fish.”

Our nonprofit newsroom depends on readers like you. Make a donation now to support independent Jewish journalism in New York.

“It can be used as a platform to fuse and combine different cultures,” Goldman said. “It blends beautifully. I think that can be a lesson that at the end of the day, we share more in common than what makes us different.”

Suh said he is always working on new products, including a unique take on arancini, or Italian stuffed and deep-fried rice balls. Suh’s version, which he’s calling Ben’s Balls, is a panko-crusted bread ball filled with bulgogi, kimchi, scallions and mozzarella.

Ultimately, Suh attributes Between the Bagel’s success to Astoria’s tight-knit community, saying that people have been “so welcoming that it has been overwhelming at points.”

“I didn’t realize how much people enjoyed my food,” he said. “I love watching other people eat it and I love how people bring other people to show it off. I can see them enjoying the experience with each other.”

Seo In Guk to make an appearance in Han So Hee, Park Hyung Sik...

Ruben Randall - March 9, 2022 0
Money
It’s 5:51 a.m., and Kris Jenner wants to talk. The text delivering this news arrives before the crack of dawn, but Jenner has already...