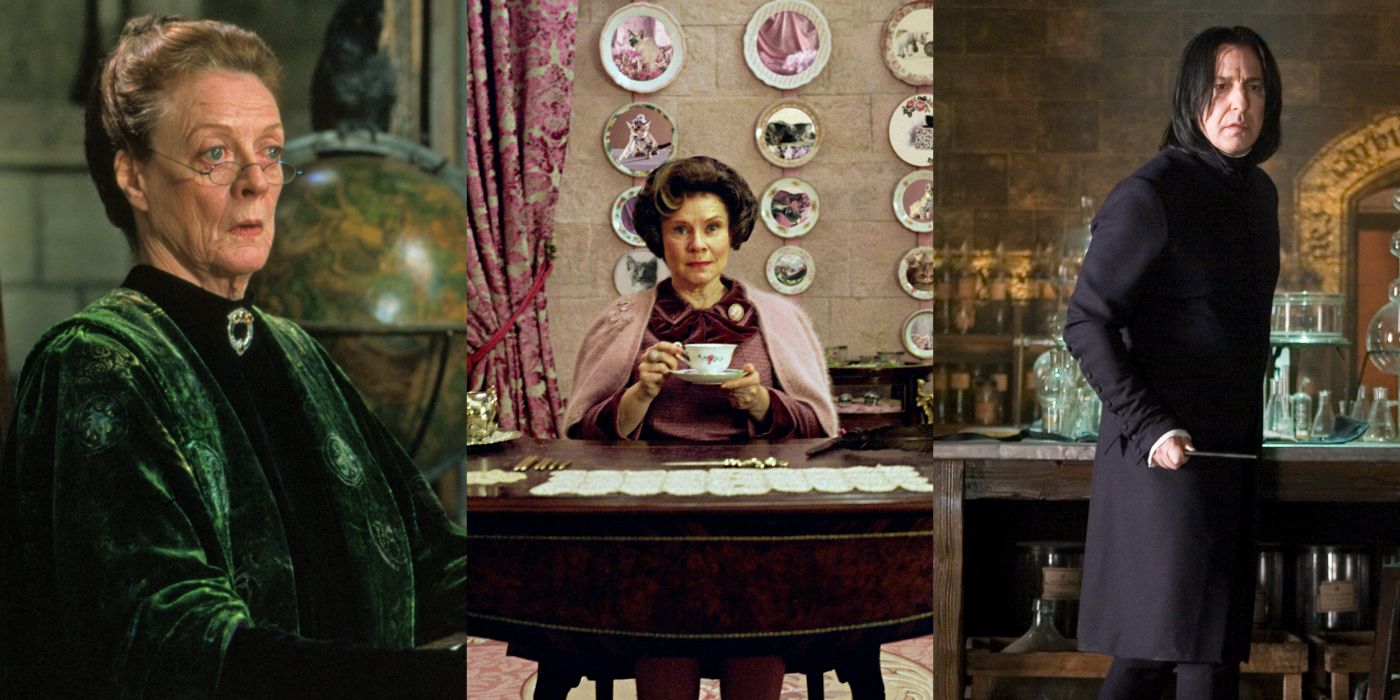 As Harry Potter fans watch the Fantastic Beasts series, including the recent Secrets of Dumbledore, they continue to learn more about Albus Dumbledore and the life he led before anyone had even heard about Voldemort and the Death Eaters. This includes the events surrounding the death of his sister, which could easily be considered one of the worst things he had to go through in his life.

Of course, Dumbledore isn’t the only character in Harry Potter who saw hard times. While they all suffered differently, each professor at Hogwarts experienced a trying moment that ultimately defines their character, for better or worse. From having their deepest secrets revealed to lifetime imprisonments, the teachers at Hogwarts have all experienced at least one particularly bad moment.

Gilderoy Lockhart – Getting Found Out

Before Gilderoy Lockhart started teaching at Hogwarts, he was on top of the world. He penned several bestselling books about his adventures fighting off Dark creatures and was regarded as one of the handsomest wizards in Europe — nothing could possibly go wrong.

Of course, Harry Potter fans know that Lockhart was a fraud, and the moment he was instructed to go into the Chamber of Secrets and save Ginny Weasley, the jig was up. All in one evening, he found himself confronted by 12-year-olds, had his own spell backfire on him, and wound up in St Mungo’s Hospital for Magical Maladies and Injuries.

In both the movies and the Harry Potter books, Minerva McGonagall had some great quotes. She was a private, no-nonsense sort of woman, and she didn’t divulge much of her personal life to her students. However, the Wizarding World website told her life story, and it turns out that Harry’s favorite teacher had faced her share of heartache.

Shortly after the First Wizarding War, McGonagall married a man named Elphinstone Urquart. The two lived in Hogsmeade village, where they had frequent visits from their nieces and nephews, whom they adored. However, Urquart died from a Venomous Tentacula bite only three years into their marriage. A devastated McGonagall moved back into her home in the Castle and never considered marriage again.

Throughout the Harry Potter series, it is clear that Remus Lupin never fully came to terms with his status as a werewolf. He was constantly ashamed, even to the point that he considered leaving his wife and son because he thought they would be better off.

Of course, when audiences understand the circumstances of Lupin’s biting, they will understand. Wizarding World reveals that Lupin’s father, Lyall Lupin, had once publically spoken out against the rights of werewolves, calling them vicious savages. To seek revenge, Fenrir Grayback attacked Lyall’s son. The entire Lupin family would never forgive themselves for the incident, and Remus took that trauma to his grave.

Quirinus Quirrell – Getting Possessed By Voldemort

Wizarding World describes Quirinus Quirrell as having a brilliant mind. However, his slight and nervous demeanor meant that he was rarely taken seriously, which first inspired him to track down whatever remained of the villain Lord Voldemort, hoping to both take him down and learn some powerful new skills.

Unfortunately for poor Quirrell, Voldemort immediately took advantage of the Hogwarts teacher, possessing his body against his will. From that moment on, Quirrell became a temporary Horcrux and lost all autonomy over his decision. Of course, this ultimately led to his death.

Filius Flitwick is one of the most underappreciated staff members at Hogwarts. He was a great teacher who was always willing to give encouragement while also holding his students accountable. He didn’t mind mischief so much, as long as his students used some good quality magic to make it happen (ie. Fred and George).

For this reason, Hogwarts falling into Voldemort’s hands would have been extremely difficult for Flitwick to see. Harry noted in Deathly Hallows that teachers like Flitwick only stayed at Hogwarts to protect the students. In the end, when some of Flitwick’s favorite pupils lay dead in the Great Hall, it must have been unbearable.

Sybill Trelawney – Getting Sacked By Umbridge

Even though everyone in Hogwarts knew that Trelawney was a fraud (even herself), she still managed to live a very comfortable life. She had lived secluded in her classroom for 16 years before Dolores Umbridge arrived at the castle, and from that moment on, things really went downhill.

After getting fired, Trelawney was allowed to stay at the castle, but her ego was sufficiently destroyed. Then, once Umbridge had left, Trelawney was still forced to share her classes with Firenze the centaur. She saw this as a major sign of disrespect, and for the rest of the series, she was typically found drinking cooking sherry, and stumbling around the castle.

Severus Snape’s entire character arc in Harry Potter revolved around one critical moment: the death of Lily Evans. Lily had been his childhood best friend, and he made it clear that she meant even more to him than that. However, they both took different moral roads in their lives and ended up on opposing sides in the First Wizarding War.

Not only did Lily die during the war, but Snape was prominently at fault. It was his information that put her in Voldemort’s crosshairs, and he would spend his life making amends for that mistake. The rest of his days were spent putting his life in danger as a double agent and protecting a boy he despised, all because he knew it was what Lily would have wanted.

Horace Slughorn – Getting Close To Voldemort

Horace Slughorn valued nothing more than the luxurious comforts that influence over powerful people could bring him. This was why he spent most of his time at Hogwarts seeking out the most talented of young witches and wizards, ensuring they would think of him kindly when their day came.

A talented wizard like Tom Riddle was just Slughorn’s type, but he didn’t realize that he was in over his head with this specific pupil. Riddle was cunning and manipulative, and he used his understanding of Slughorn to weasel out important information. By the time Slughorn understood the damage he had done, it was too late. He then spent years feeling deep regret and guilt, enough even to lead him to alter his own memories, lying to both Dumbledore and himself.

Alastor Moody was known as the most vigilant Auror ever, to the point that he was often considered paranoid. He had seen too much darkness in the world to be able to rest soundly, and he was always sure that danger was around every corner.

While others might not have taken him seriously, Moody proved the hard way that his fears were not unfounded. Before he officially started as a professor at Hogwarts School for Witchcraft and Wizardry, he was attacked by a Death Eater, held captive, and starved. This would be a horrible experience for anyone, but the fact that this situation was exactly what Moody was always looking out for with his magical eye made it much more personal.

Dolores Umbridge was a special kind of evil. While her actions were cruel, everything she did was typically protected by the law. This allowed her to rule freely over others while hiding behind government regulations and her own sickly sweet demeanor.

However, a time finally came for Umbridge to find herself exposed with no corrupt Minister for Magic to protect her. After Voldemort’s fall, Wizarding World reports that she was put on trial and found guilty for the torture, imprisonment, and deaths of Muggle-born witches and wizards. The realization that she would be spending the rest of her life in prison was probably difficult for Umbridge to swallow, but there is no doubt that it was well deserved.

NEXT: 10 Slytherin Quotes From Harry Potter That Perfectly Sum Up Their Personality


Angel is a Senior List Writer at Screen Rant, specializing in Harry Potter, Lord of the Rings, and other book-to-screen content. She holds a bachelor’s degree in language interpreting and is passionate about all things culture, linguistics, and communication. Currently, Angel lives in Michigan with her husband, three sons, two cats, and a rambunctious dog.
Angel is deeply in love with any form of storytelling, whether it be books, movies, TV Shows, or video games. She loves diving deep into lore (the more complex, the better) and finding the hidden meaning behind a character’s smallest actions. Even more than that, Angel loves sharing her finds with anyone who is willing to listen, which makes Screen Rant the perfect place for her.
In her free time, Angel can typically be found binge-watching comfort shows, hanging out with her guild of nerdy friends, playing any Zelda game, or teaching her kids about the fantastical worlds of fiction.
Find Angel on Twitter: AnjuShiSki

Away From US, Arnold Schwarzenegger Found a Unique Protein Shake Hack With Mother’s Help-...

Ruben Randall - November 4, 2021 0
Actor
"Terminator" actor Arnold Schwarzenegger's affairs with multiple women came to light after his divorce from his wife of 25 years, Maria Shriver, and...